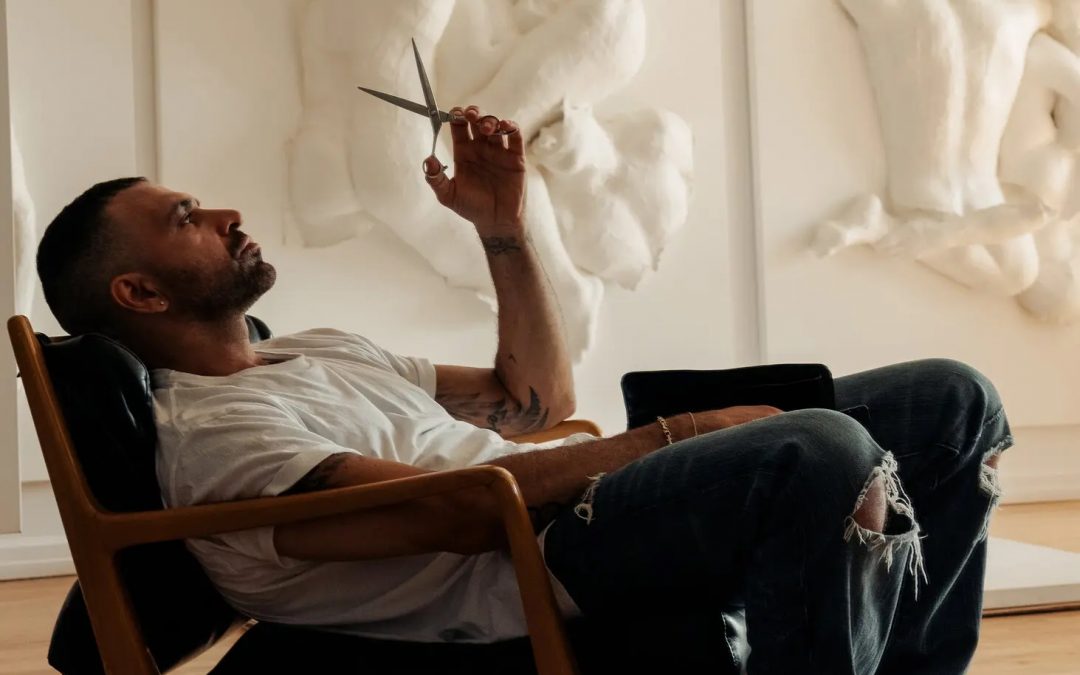 The Man Behind Fashion’s Most Famous Bob

NYT: For the past six years, at 8 a.m. sharp, Andreas Anastasis has walked to Anna Wintour’s Greenwich Village townhouse, where for about 20 minutes every weekday he maintains upkeep, whether it’s cutting, coloring, spraying, blow-drying or styling, of the most instantly recognizable bob in fashion — maybe the world. A short distance from there, “right across the street from Carrie Bradshaw’s house,” he has spent nearly a decade running his namesake salon, where he now works two days a week. The only magazine in the waiting area is Vogue.

But back at his loft in New York’s meatpacking district, Mr. Anastasis practices another discipline. For this one, he keeps the heads hidden.

During a recent visit, plaster casts of muscular backs and thick calves protruded from walls like the specters of ancient Greek warriors. On a nearby plinth, the breasts, buttocks, fists, forearms and stomachs of his friends and lovers were strewn about, waiting to join the 47-year-old artist’s sculptural collages. But the busts were stored mostly out of sight, just off the bedroom.

Nothing in the apartment hinted at his career beyond art. Had it not been for his beloved Yorkipoo, named London, whose fur was pulled back into a flirty topknot, there weren’t any hints to suggest Mr. Anastasis even had one. Which makes sense, because, except for the odd picture on his Instagram feed, he doesn’t talk about it.

As the top editor of American Vogue since 1988, Ms. Wintour has long been the subject of public fascination and scrutiny. A fictionalized version of her was played by Meryl Streep in the 2006 film “The Devil Wears Prada,” itself based on Lauren Weisberger’s roman à clef about her time as Ms. Wintour’s assistant, and she was the subject of a recent biography by Amy Odell, out of which came a widely circulated gossip item about her lunchtime preference for steak and a caprese salad without the tomatoes.

Those close to Ms. Wintour understand the importance of discretion. In turn, that discretion keeps them close to her.

“Anna’s one of the most loyal people I know,” said Mr. Anastasis, who has no other regular celebrity clients. “When you go to her home, almost everyone working there has been there forever.”

…
During the early days of the pandemic, when no one was getting their hair done — or at least admitting it — Mr. Anastasis continued to show up at Ms. Wintour’s house as he always had, except that he wore a hazmat suit. After each of her public appearances, he scrolls through Getty Images to make sure her hair was properly patted down. When Ms. Wintour travels to Europe for fashion shows, he ships dyes along with detailed instructions to ensure that the international stylists her team hires maintain her specific shade of caramel blond. And when he’s out of town, he entrusts Lisa Jillian Marconi, a former employee of his who now works at Vidov West salon, with the responsibility. “I’m more obsessed than Anna is,” he said. “When it’s not perfect, I get so mad.”
…
“His level of dedication is rare and a pleasure to be around,” Ms. Wintour wrote in an email when asked about Mr. Anastasis. “Always there when I need him, at whatever hour of day or night, and so careful and meticulous about his work. I feel lucky to have known Andreas for so many years and I’ve seen his skill, creativity and commitment time and again. I enjoy my time with him.”
…
At the Met Gala last month, where the theme was “gilded glamour,” Ms. Wintour paired her Chanel haute couture gown by Virginie Viard with a bejeweled tiara, a family heirloom. “Everyone was like, ‘No, Anna! Don’t do it. People are going to tease you,’” Mr. Anastasis recalled. He took her aside and told her, “No one is going to mess with you. You’re the queen of fashion. This is your event.”
…
Ms. Wintour wrote, “I trust him totally.”
…
As she should. To every question that hewed too closely to Ms. Wintour’s private life — Does she meet him with freshly washed hair? Or does he wash it for her in the bathroom sink? Does she like to chat? Gossip? Laugh? What type of music does she play? How does she take her morning coffee? Does she wear her trademark sunglasses at home? What about pajamas? Slippers? A robe? — Mr. Anastasis had the same reply: “That’s between her and I.”
…
…

He admitted, though, that people might be surprised by her warmth. “I love working with her,” he said. “She’s always been so nice to me.” According to Mr. Anastasis, she has also been encouraging and complimentary of his art practice. “I’ve photographed her dogs and given her the framed pictures as gifts,” he said about her goldendoodles. “She totally gets it.”

On a sunny day in May, Mr. Anastasis was dressed in a white tank top and black gym shorts that showed off a few of his many tattoos, among them an interpretation of Leonardo da Vinci’s Vitruvian Man on his left thigh and his name rendered in thorny cursive lettering across his upper back. He sat at his computer searching for a video he animated from the slices of his own M.R.I.

“I just have so much energy to create. And I’d keep going, too, if I hadn’t run out of space,” he said. Elsewhere in his home, there were cloudy resin pour paintings; blown-up photographs he’d taken with a disposable camera when he was 15; and a pair of awards for two short films he directed on the topic of mental health.

For Mr. Anastasis, having the space and time to make art, or as he described it, “the freedom to play,” is an extravagance he’s always wanted, and one he’s earned. “I’m lucky that I have a job,” he said. “I’m not doing any of this to pay the bills.” Although there are similarities between his salon and sculpting practices — namely the trust he requires from his clients and models — there’s a difference between trimming someone’s hair and creating a replica of their breasts, as he did for his friend’s mother. “She’d seen my work on Instagram,” he said. “I’m not gonna lie, I was nervous. But I also loved how open she was.”

He pulled up a recording of “im·mor·tal,” a performance he staged last fall at Laverdin Fine Arts in New York. The footage showed Jefferson “The Tank” Sullivan, an M.M.A. and Muay Thai fighter, sprawled naked on a massage table in the center of a white-box gallery. Mr. Anastasis was carefully layering strips of plaster-soaked cotton against Mr. Sullivan’s backside, which was shiny with Vaseline. About 20 minutes after applying them, he removed what had become a hardened shell. “It’s like an exorcism,” said Mr. Anastasis. “Something gets drawn out.” Mr. Sullivan described the experience as “magical,” while another one of his models, the fitness coach Matt Pattison, said, “It’s a therapeutic experience. Each time, I’d see him hold the piece like a child.”

Mr. Anastasis was raised by Cypriot immigrants in the town of Beckenham, Kent. His father, a cobbler, made shoe samples for Jimmy Choo. His mother owned Fiji Unisex Hair Salon, where older women from the neighborhood would go for their weekly shampoo-and-set treatments. From a young age, he loved hair: At night, when everyone had gone to bed, he’d uncover the Barbie dolls he’d hidden from his two older sisters and give them braids.

So it came as a surprise when he enrolled in the London College of Fashion’s fashion design technology program. “You know what’s messed up?” said Mr. Anastasis. “I went into fashion because my dad said only gay men do hair.” Laughing, he added, “Well, that didn’t work.”

In his early 20s, after working at one of Toni & Guy’s London salons for about a year, Mr. Anastasis moved to New York. He had been romanticizing the city since he saw the 1991 documentary “Madonna: Truth or Dare,” which, especially given his conservative upbringing, was revolutionary in its casual depiction of queerness. He crashed on a cousin’s couch in Jersey City until he saved enough money cutting hair to afford the rent on an attic apartment in Murray Hill, a neighborhood in Manhattan, which he shared with a male escort he met on Craigslist.

Mr. Anastasis slept on a mattress on the floor, but he could see the Empire State Building from his window. “It was heaven,” he said. By day, he worked as a stylist at Robert Kree salon; at night, he was a go-go boy at clubs such as Twilo and Limelight. “I was doing hair on acid,” said Mr. Anastasis, whose drug use eventually cost him his job at the salon. “I’d have a cigarette in one hand and a blow dryer in the other. I’d run downstairs to do cocaine, and then come back up and burn someone’s hair.”

When he was 28, he flew back to London to activate his green card. His parents picked him up at the airport. “I was really spiraling,” he recalled. “My mom saw me and immediately said, ‘You look like death.’ That’s when I knew I needed to get clean. And that’s when the second part of my life began.”

Mr. Anastasis returned to New York and successfully begged for his job back. He also found spirituality and later embraced veganism. Today, he meditates twice daily for 20 minutes, and has weekly phone sessions with an energy healer out of San Francisco who told him that in past lives he’s been, among other things, a medieval astrologer who also cut hair, and who was executed, and his mother’s lover.

“As you know, I can be quite demanding”

More than a decade ago, Mr. Anastasis got the call that changed his life. A makeup artist friend of his said there was someone he needed to meet. “I can’t tell you who it is,” she said. “But it’s high profile. Just show up at the address.”

It was Ms. Wintour’s. She needed a blowout.

“I knew who Anna Wintour was, but I wasn’t that invested,” Mr. Anastasis said. He would see her every few months when her longtime hairstylist was unavailable. Roughly six years into Mr. Anastasis’s casual arrangement with Ms. Wintour, during which time he opened a salon of his own, her stylist retired.

“One day Anna turned to me and said, ‘Susan’s leaving. Would you be open to taking over?’” said Mr. Anastasis. “She goes, ‘As you know, I can be quite demanding.’”

But he bristled at her portrayal as a ruthless editor. “When a guy does what she does, he’s a businessman. But Anna gets such a hard rap because she’s a woman. It’s frustrating,” he said. “Listen, without getting too deep about it, I consider her a friend. In my hair career, she’s without a doubt the highlight. Even when I retire from hair, I won’t retire from Anna. As long as she’s going, so am I.”

And with them both, her iconic hairstyle. “I would hate to change it,” said Mr. Anastasis. “That’s like Karl Lagerfeld getting rid of his ponytail. Or Marilyn Monroe going brown. That bob is who she is.”