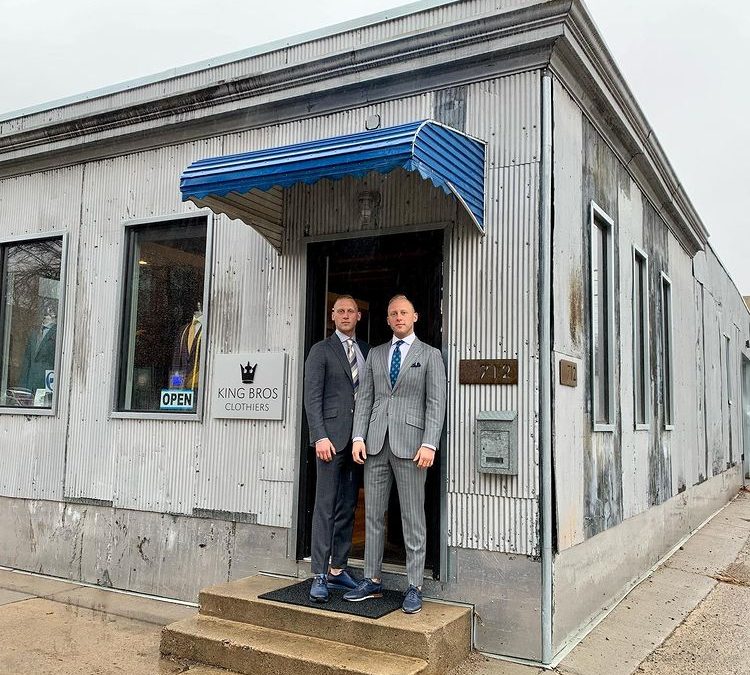 If you asked google to find the best place in Minneapolis for custom suits, you’d likely find @kingbrosclothiers

They started 10 years ago as a line of ties, but as the years went on they realized custom clothing was their long-term goal.

For the last 6 years they’ve been operating out of a NE studio space, but almost 2 weeks ago, they transitioned to a new retail space on the block of Quincy St NE & 15th Ave NE.

Their current little tin space is totally unassuming on the outside. It was vacant for years and then turned into an Airbnb for a stint. It’s a space that doesn’t catch your eye… until you go inside, and that’s exactly what they wanted, something with a bit of a “wow” factor.

The same reaction is true of their clients when they try on their custom suits! Kenny and Danny work hard to keep their clients feeling good, which isn’t difficult when you’re personally sourcing fabric from some of the best mills in England and Italy.

Clothing has always meant a lot to the King Bros. Growing up as twins meant they had to share everything — a room, a car, a womb — so clothing was the only thing they had for themselves. If they didn’t wear something different from each other, no one would be able to tell them apart. So that became a “unwritten rule” of theirs, to never share clothing, and that still holds true today.

When asked why they love NE so much, their answer was synonymous — it’s a booming area with so much to do. They love that “Quincy Corner” provides options for their clients to stay and support the local establishments after a fitting, creating a sense of community.

They have clients who tell them they schedule their fittings at certain times so they can grab a beer at @indeedbrewing or tacos at @centro_mpls afterwards, and we think that’s pretty great!

King Brothers Clothiers was founded by twin brothers Kenny and Danny King in 2011. Based in Minneapolis, MN, the King Brothers specialize in balancing timeless style with today’s trends through the suits, sportcoats, jeans, etc. they create.

With competitive price points using the bespoke process, they set themselves apart and above the competition.

Clients include some of the country’s most prominent athletes, and their work has been featured on FOX, ABC, ESPN, NBC, CBS, Hulu, NFL Network, MLB Network, and NBA TV.