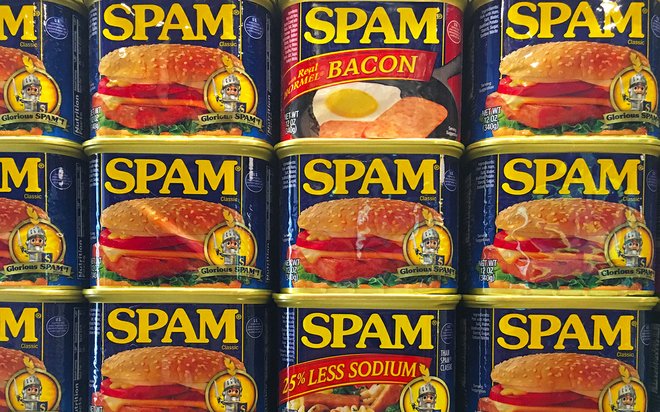 Trendy chefs are celebrating SPAM coast-to-coast, and they’re leaving us in the dust.

Is there anything more Minnesotan than not appreciating how awesome we are? From F. Scott Fitzgerald to the Lakers to Lizzo, we have a weird habit around here of only recognizing how amazing our home-grown heroes are after the coasts bestow their seal of approval.

Well, something similar is afoot in the culinary world right now in regards to SPAM. Our local chefs need to get on it, so that all these coastal chefs aren’t bogarting all the SPAM future culinary relevance. My evidence:

Are you aware that the ultra-trendy Brooklyn, NYC restaurant Swell Dive has been making big news with their chicken-fried SPAM tacos? It’s true! Eater New York critic Ryan Sutton recently called them “fantastic”; “The fried shell packed a gentle crunch, while the industrial luncheon meat, cut as thickly as a Snickers Bar, exhibited the airy snap of an artisanal sausage. A shower of crispy onions imparted aroma and complexity.” That sounds like good SPAM that the Twin Cities would enjoy! But it’s not here.

Meanwhile, Miami star chef Timon Balloo, of the wildly successful Sugarcane Raw Bar restaurants, is all about SPAM at his new restaurant Balloo. He’s even talking about making it himself from scratch. I mean, God bless him and all of his endeavors, but what are people in Miami doing making SPAM, when we make the actual hogs SPAM is made from? If anyone is making artisanal SPAM, I think it should be someone with a lot of Minnesota hogs at hand—you know who you are!

Finally, have you asked yourself what fancy movie-star-wanna-be’s were doing all September? Eating SPAM of course, at the three-successive weekend SPAM pop-ups called MUSUBI MADNESS from the Hollywood tiki bar LONO. What was served at such a series of events? Via Delish (although they spelled it incorrectly as musabi throughout the entire piece, we corrected it for them): “A build-your-own musubi bar featuring global variations like Chili Verde Musubi, Filipino Lumpia Musubi, and American Burger Musubi, Korean Fried Rice Musubi, and Spring Roll Musubi” as well as, “a SPAM and shrimp corn dog served with banana ketchup; a SPAM-Infused Soft Serve Sundae that comes with topping options like furikake, teriyaki caramel, and vanilla-braised pineapples; SPAM-themed Tiki Cocktail made with rum, pineapple, Cara Cara oranges, and coconut creme and served over crushed ice.”

Yet, Fancy Minneapolis Loves Not

I mean, you can find SPAM in local restaurants if you try. The nutshell history of SPAM is that is was born in Minnesota in 1937 at Hormel, but given a massive global push during World War II, when it was the primary ham of everywhere in or around the Pacific Ocean. That led to SPAM being huge in Hawaii, big in the Philippines, beloved in South Korea, hot in Japan—you get the idea.

This big-in-Asia culture lives on today in Minnesota, you can currently find genuine SPAM musubi at Lake Street gem Midori’s Floating World, at the Ono Hawaiian Plates pop-ups, and fried SPAM musubi at the pan-Asian grocery icon United Noodles’ Unideli. You can find SPAM in the famed “soldier’s soup” Budae Jungol at the Korean restaurant Hoban in Eagan, and you can find it as a slider at Stillwater’s Tilted Tiki. Of course we eat it at the State Fair booth every summer, and we even featured cans in our Superbowl 52 #snackship! But can’t we do more? I think we can. And I think we can do it before the rumored plant-based SPAM is released.

I mean, ask yourselves, fancy chefs of Minnesota—are we going to lead the SPAM avant-garde, or are we going to play catch-up? Open your cans and show us what you’ve got, secret SPAM-loving chefs and makers of Minnesota. We have nothing to lose but our natural self-doubt, and nothing to gain but our rightful place in the pan.