In Memory: Howard Mohr, author of ‘How to Talk Minnesotan’ 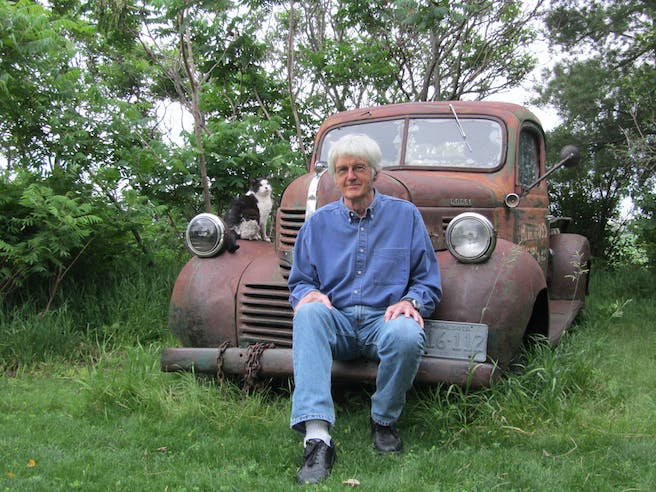 Provided by Marcy Olson
…
The book was considered an essential look at what makes Minnesotans Minnesotan.
…
Star Tribune: Howard Mohr, a writer for “A Prairie Home Companion” whose book, “How to Talk Minnesotan,” cast a humorous eye on Minnesotans, died Sunday. He was 83.
…

First published in 1987 and later turned into a musical out of the Plymouth Playhouse, “How to Talk Minnesotan: A Visitor’s Guide” expanded upon Mohr’s writings for Garrison Keillor’s weekly radio variety show. The book was considered an essential look at what makes Minnesotans Minnesotan, detailing the “Minnesota goodbye,” the art of waving, the intricacies of hotdish and the difference between “not too bad a deal” and “a heckuva deal.”

“Anyone moves to Minnesota, you give them a copy of his book,” said Marcy Olson, who in the 1980s took Mohr’s popular class as a freshman at Southwest Minnesota State University in Marshall, then known as Southwest State University, and became a lifelong friend.

Mohr was a Minnesota outsider who became an insider.

Plain-spoken, gentle and kind, he told of Minnesotans’ quirks with a loving eye. He was born in Des Moines, spent some years in San Jose, Calif., then as a teen returned to a farm in Ferguson, Iowa, where he lived with his parents and four younger siblings. He transferred to Abilene Christian University in Texas to be near the woman who’d become his wife.

“We didn’t have any negative years in our 59-year-three-month marriage,” said his widow, Jody Mohr. He got his master’s degree from the University of Arkansas before studying for his doctorate at the University of Iowa. He had a knack for language, a keen eye and an even keener wit.

Mohr became part of an impressive cohort of professors in the English department at Southwest Minnesota State University in Marshall. In 1970, Mohr and two other faculty members joined the English department: Stephen Dunn, who would later win a Pulitzer Prize for poetry, and Philip Dacey, an accomplished poet. That trio, along with Bill Holm, a poet and frequent guest on “A Prairie Home Companion,” and Leo Dangel, an author of six poetry collections, garnered national attention for writing about rural life.

The Mohrs were both pilots who loved travel and flew single-engine planes to spots across the country. They lived on 5 acres in Cottonwood, where Mohr stayed until only a few weeks ago, when his Parkinson’s disease worsened. Even as they aged, it still felt like they were dating; a decade ago, the couple took dance classes together.
…
“I’d put on records and we’d polka from the dining room to the kitchen,” Jody Mohr said.
…
Mohr is survived by his wife; their daughter, Susan; and his four younger siblings. Services will be held at a later date. “He had an appreciation of the Midwestern lifestyle, of rural Minnesota, and his writing reflected that,” said Dana Yost, former editor of the Marshall Independent and a close friend. “It wasn’t like Sinclair Lewis savaging us. He wrote observational stuff that was true, but he found a way to make it humorous. He saw the stereotypical definition of Minnesotans, the ‘you betchas’ and the long goodbyes, and he found the humor in that.”

Reid Forgrave covers Minnesota and the Upper Midwest for the Star Tribune. He started at the paper in September 2019, returning to his newspaper storytelling roots after eight years as a national sportswriter for FOXSports.com and CBSSports.com.