Think your piano is grand? These Minnesotans make room for massive pipe organs in their homes! 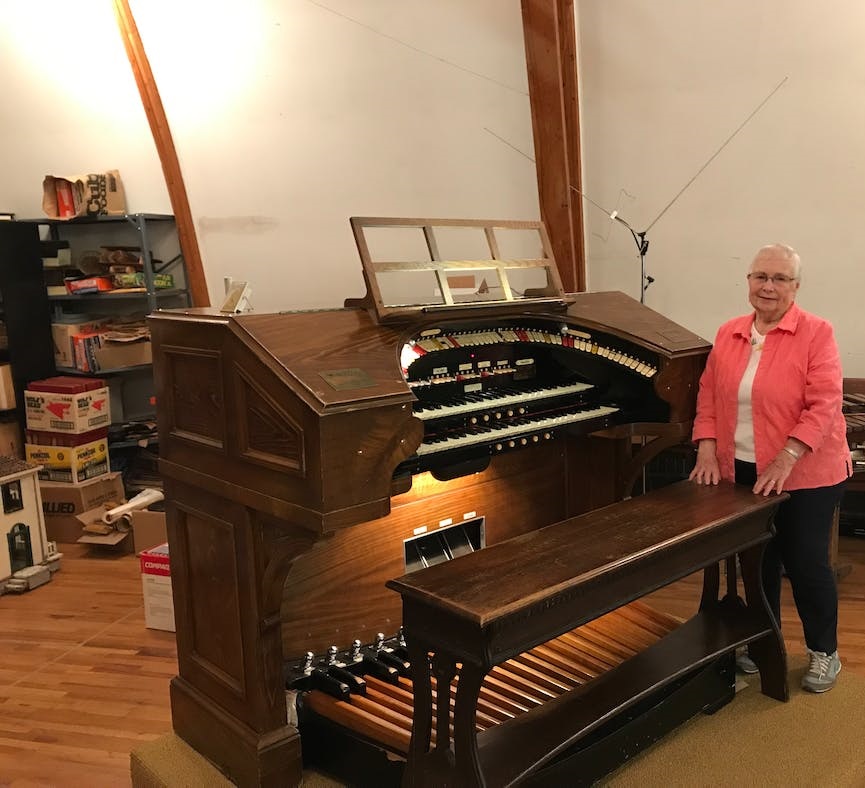 Marilyn Matson at the console of a Wurlitzer theater pipe organ!
…

If you want to rattle the windows, nothing beats “the king of instruments.”

StarTrib: You might think you’re fancy if you have a grand piano parked in your parlor. But if you really want the ultimate musical status symbol, you can’t beat a pipe organ. At least that was the case 100 years ago, when no railroad tycoon or lumber baron would consider his mansion complete without “the king of instruments.”
…
It didn’t matter if you weren’t musical. If your name was Hill or Ordway or Carnegie, you could hire a professional musician to work the keys, stops and pedals. Or the organ might even play itself like a player piano.
…
In the days before hi-fi, that was home entertainment for the elite, who donned smoking jackets, lit cigars and sipped brandy while a huge symphonic organ made the chandeliers rattle with Wagner’s greatest hits.
…

“The well-to-do got them because they were a statement of their well-to-do-ness,” said Michael Barone, host of “Pipedreams,” a nationally distributed radio show about pipe organs produced in the Twin Cities by American Public Media.

Over the decades, however, musical tastes changed and entertainment options expanded. Many of the grand residential pipe organs fell into disuse and disrepair and were removed by later generations who found better uses for the space once devoted to a massive keyboard console and hundreds of towering metal and wooden pipes.
…

These days, even venerable church organs are begging for homes as congregations close their doors or shift to contemporary music.

“They want the organ to go away because they need space for the drum set,” said John Bishop, director of the Organ Clearing House, which specializes in finding new homes for old organs. Bishop said supply is outstripping demand, even for organs offered free to a good home.

“We’ll never be able to place all the organs that are available,” he said.

But a few dedicated enthusiasts are saving organs — built in the early 20th century for churches, theaters and mansions — that are headed for the dumpster. They’re installing these immense instruments in ordinary homes — and enjoying a listening experience once reserved for high society.

From a certain angle, Charles Harder’s house in Mountain Lake, Minn., looks like an ordinary 1960s rambler. But just off the dining room there’s a 24-by-24-foot room with 15-foot-high ceiling that’s filled with 1,500 organ pipes — row after row, ranging in size from a pencil to a 9-foot-long beam.

“People’s jaws drop when they come into the house,” Harder said.

The massive instrument, which sounds as amazing as it looks, is capable of producing tones ranging from an ethereal whisper to a thunderous blast that “shakes the room,” Harder said.

Harder, 71, is a retired high school choir director, music teacher and church organist who learned to play the organ while growing up in Mountain Lake, about two and a half hours southwest of the Twin Cities. He has music degrees from St. Olaf College and the University of Illinois, Chicago.

When he retired from his job in the Twin Cities in 2006 and moved back to his hometown, he wanted to keep playing the pipe organ. He found one in a New Jersey church that had closed its doors. He offered $5,000 for it, though he thinks it was on the verge of being thrown out.

“I didn’t want to take it for nothing,” he said.

Harder drove out East and hired a crew to dismantle the organ and load it into the 26-foot- long truck he had rented. Once back home, he cut hundreds of thin strips of wood to create an intricate mechanical linkage system in his basement to connect the keyboard to the valves in the organ pipes.

Though he did a lot of the work himself, repairs to the organ and other costs added up to about $45,000. He also put on that addition to accommodate the instrument. 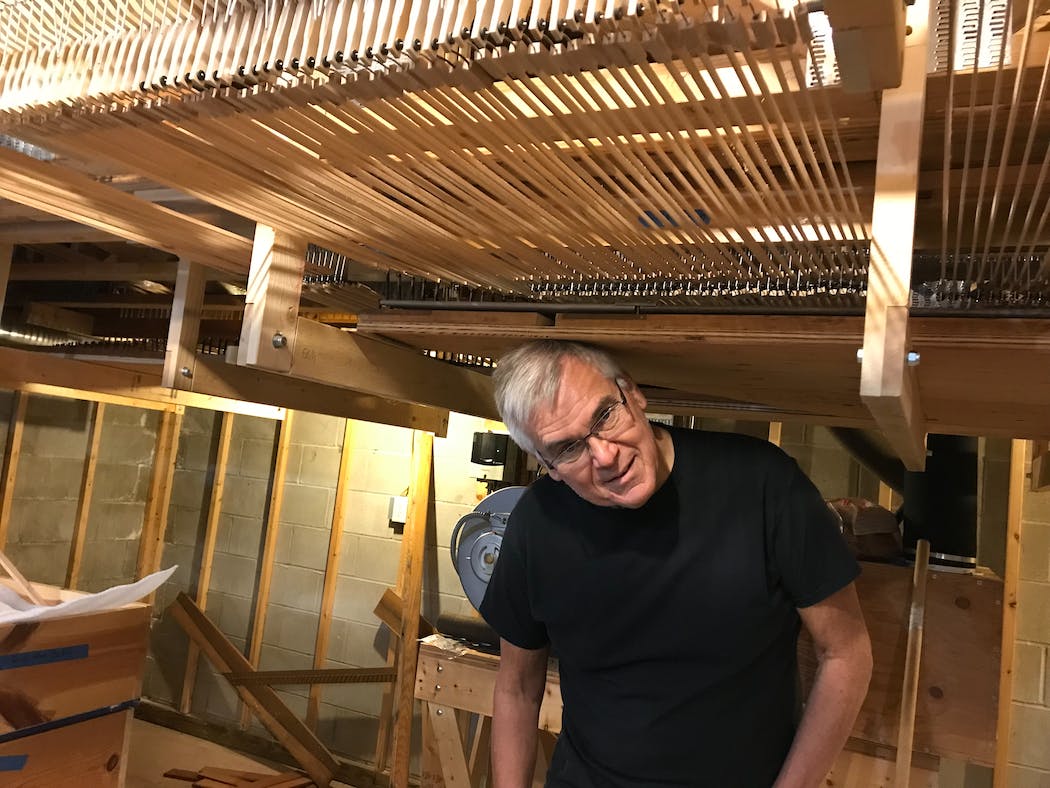 …
Charles Harder underneath the intricate keyboard linkage system for his pipe organ mounted in the basement of his home.
…

The payoff for all that work and money: a rich, cathedral-like grandeur when Harder plays a hymn or a classical piece.

“I love playing on it,” Harder said. “It’s a grand way to express emotions of all natures.”

In 1923, the Kimball piano and organ company built a pipe organ for the Lake of the Isles mansion of Edward Backus, a lumber baron who was the namesake of the town of Backus, Minn.

Two decades later, the organ went from being a plaything of the wealthy to something a little more spiritual when it was installed in the Andrew Riverside Presbyterian Church in Minneapolis. But in 2002, when part of the church collapsed and the building had to be demolished, the organ needed to be moved.

That’s how it ended up in the Hastings home of Michael LuBrant.

LuBrant, director of the Program of Mortuary Science of the University of Minnesota, learned to play the organ as a kid, worked as a church organist while in college and had owned organs.

Once he and other volunteers from the local organ community heard about the soon-to-be orphaned organ, they raced to get it out of the church just ahead of the wrecking ball. Despite its “not immodest size,” he was willing to give it a home and refurbish it.

The 1,143 pipes now fill an entire room at LuBrant’s home. A walnut console with ivory keys sits in the living room. A three-horsepower blower (about the size of a washing machine) resides in his basement.

When it was owned by the Backus family, the organ could play itself using punched paper rolls similar to player piano rolls. Now the organ uses digital files to reproduce live performances. The arrays of pipes, bearing names like “flute d’amour,” “viole celeste” and “vox humana,” are designed to replicate the different parts of a symphonic performance, from strings to woodwinds and even the human voice.

“It’s wonderful,” LuBrant said. “I just dim the lights in the evening and listen.”

From a theater to a barn

Roland Matson was a young doctor with a general practice in Spring Valley, Minn., when he told his wife, Marilyn, that he bought an organ.

That was 1962, when the couple were living in a three-room apartment in town with a toddler daughter. Marilyn Matson assumed her husband purchased something that could fit in a corner of the living room.

Then he brought his wife to a church in Preston, Minn., where the organ was housed. It had nearly 600 pipes.

The 1925 organ had been built by Wurlitzer for the Garrick, a movie and vaudeville theater in downtown Minneapolis. Designed to accompany silent films, theater organs like it fell silent themselves with the advent of talking pictures.
…

Many were scrapped, but some had a second act, repurposed as church organs or as entertainment in pizza restaurants, a dining fad during the 1970s and ’80s. (In the Twin Cities, a chain of pizza restaurants called Cicero’s featured theater organs.)

In the 1940s, the Garrick organ was acquired by a Lutheran church in Preston. In 1958, that church merged with another and the Wurlitzer was sold at auction. Matson submitted a sealed winning bid for $500. (Family members suspect that he might have been the only person bidding.)

For a time, the organ was kept in the empty church. It was moved into storage when the old church building was converted into apartments.

Eventually, Matson bought a small farm and converted an old wooden barn into a home. The hayloft, a cavernous 30-by-50-foot space, became an auditorium for the organ.

“Our home was totally built around the organ,” Marilyn Matson said.
… 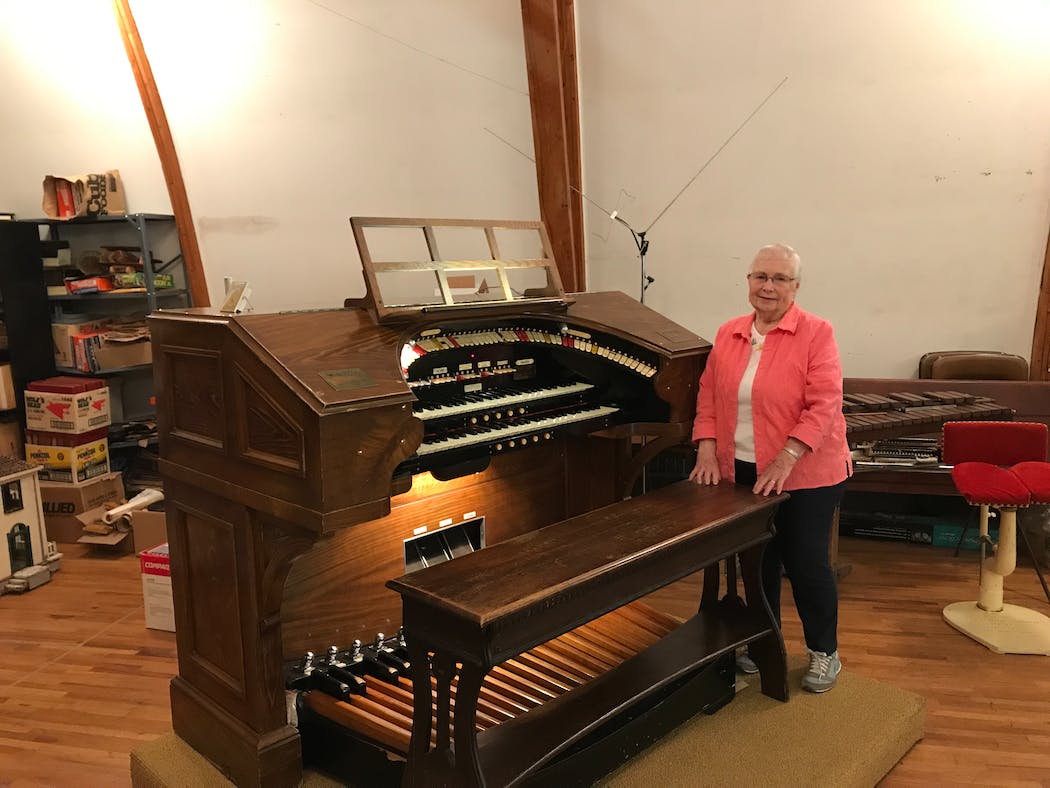 …
Marilyn Matson at the console of a Wurlitzer theater pipe organ installed in the hayloft of a barn converted into a home in Spring Valley, MN.

Matson, an accomplished pianist, taught himself to play his outsized purchase.

“He used to play it almost every day,” said his son, Alan Matson.

The organ was also regularly used by guest performers in concerts and jam sessions for fellow members of the American Theatre Organ Society.

A theater organ is designed to play popular music with a sound that’s more showbiz than sacred. Matson’s instrument features a “toy counter” which can play a range of percussion instruments as well as a siren, bird chirps, a train whistle, sleigh bells and thunder.

Roland died in 2008. Marilyn, 89, has continued to live on the farm, partly to take care of the organ.

“It’s been part of our lives for 60 years,” she said. “I just couldn’t leave it. It’s been like another child, almost.”

She hopes the mammoth instrument will find a new home after she’s gone.

“I want someone to take care of it,” she said.

Richard Chin is a feature reporter with the Star Tribune in Minneapolis. He has been a longtime Twin Cities-based journalist who has covered crime, courts, transportation, outdoor recreation and human interest stories.