ICYMI: New Minneapolis Building is One of The City’s Finest Works of Contemporary Architecture 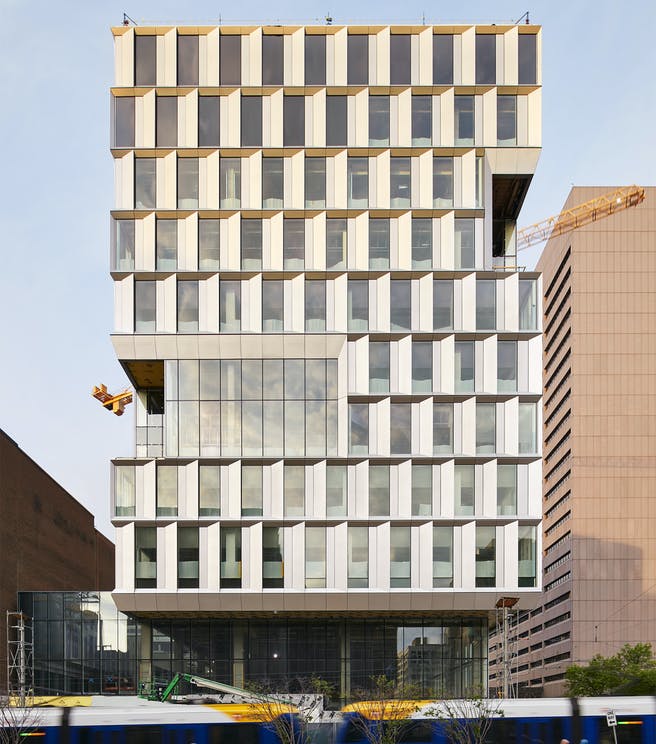 With its shiny metal exterior and relatively low scale, this 11-story building gleams like a jewel box. A brilliant complement to the solid granite, 19th- and 20th-century architecture of City Hall and the Hennepin County Government Center, it’s also a bright punctuation point for the Government Center Plaza.

Designed by Minneapolis-based MSR Design and the Danish firm Henning Larsen, it boasts an aluminum-and-glass wall system with beveled frames wrapping every window. The frames repeat across the facade to create an illusion of depth and rhythm while using very thin materials. As the sun passes during the day, the frames gleam with changing prismatic colors against the darker glass.

“The facade shimmers like the surface of a lake,” says Eric Amel, MSR Design’s project architect.

The architects also created terraces on every floor, which will allow employees access to fresh air during the workday — something of a rarity for urban office buildings.

The 370,000-square-foot building was designed to consolidate several city departments and their 1,200 employees, who had been scattered across several downtown buildings.

Its unique public entry makes the most of the location.

In a northern climate, placement can make the all the difference between a cold or an inviting entry. 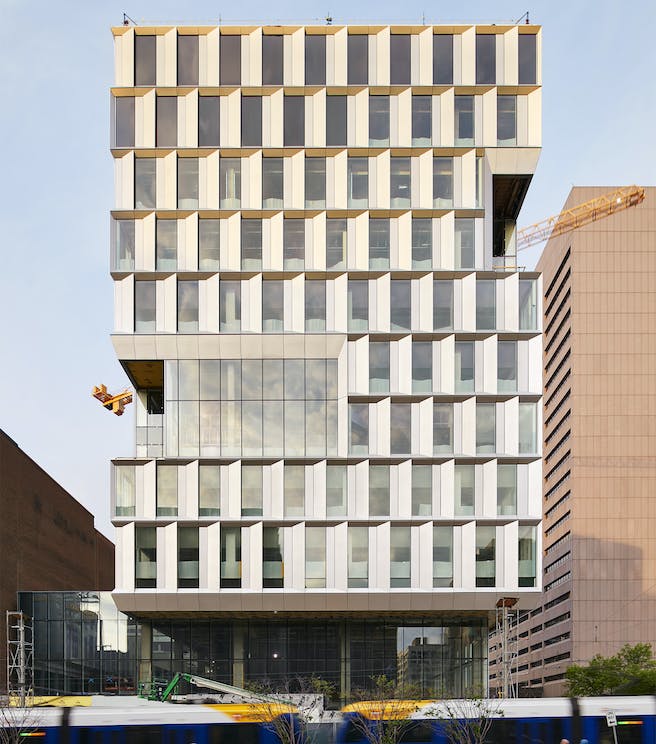 Many of the proposals for the building placed the main entry on the northeast corner across from City Hall, said Council Member Lisa Goodman, who was a member of the committee that selected the architects. But Henning Larsen stood out because “they performed a solar gain and wind study showing that location to be very windy,” Goodman said.

The result is a more sheltered entry shifted about 100 feet up 4th Avenue.

This entry opens to a two-story lobby, which leads to the ground-floor public meeting rooms. There also is a grand wood stairway that sweeps up to a sunny mezzanine.

From here, visitors can take a gently rising walkway that connects to the skyway system at 6th Street.

The walkway is visually independent, seeming to elegantly float through the two-story lobby. In addition to being attractive, it offers noteworthy views, including the Great Seal of Minneapolis, which is mounted on the lobby wall. The massive, 20-ton seal was carved in the 1960s for the old Minneapolis Auditorium and kept in storage for the past 30 years.

From the walkway, a panorama of downtown’s architectural materials unfolds. You can see the massive granite walls of Government Center, the travertine marble-clad towers of First Bank Plaza, the Art Deco CenturyLink building built with warm Kasota limestone, and City Hall, with its Ortonville granite.

A study in connection

Before the final design was approved, city representatives, MSR and Henning Larsen studied public service buildings around the country to find what made them effective and customer-friendly.

The new Public Service Building is a one-stop shop where residents can pay a water bill, apply for a building permit, or meet with a city planner. These and other services are now housed at the bright yellow service counter on the mezzanine level.

Early in the planning process, there was debate about whether to connect the building to the skyway system. Those who dislike skyways say they take the people, the businesses and the vitality off the streets.

But the Public Service Building makes its skyway a year-round civic space — one that is indoors yet connected to the city. The walkway and grand staircase clearly connect to 4th Avenue and Government Center Plaza.

In an era when government buildings require high security, the architects did a masterful job of designing a public service building that feels open to the public. They did so by separating the secure office zones two floors above the public areas.

The new building and the concurrent renovations to City Hall will allow the city to sell properties and end leases on other buildings used to house employees, said Mark Ruff, the Minneapolis city coordinator.

With its green technologies that will sharply reduce environmental impacts and energy costs and its 100-year life span, the Public Service Building is exactly what the city sought, said Goodman.

It was never looking for a grand building — but a lasting one.

“We’re not spending money on a building or its architecture,” Goodman said. “We’re investing in the people working there and the people they serve.”

Frank Edgerton Martin is a landscape historian, preservation planner, and writer for design firms and publications.