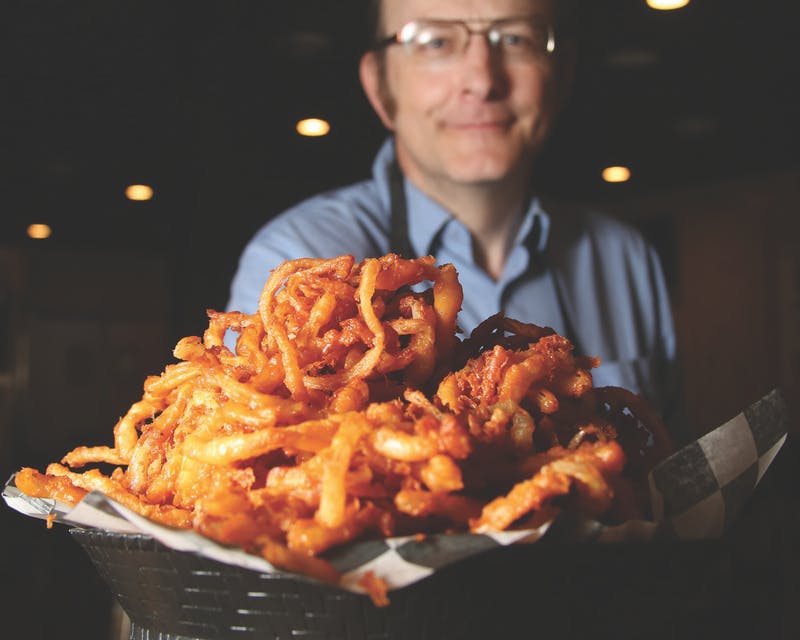 The Ringmaster starts out simply enough before it bends and folds in on itself, impossible to untangle—not wholly unlike the onion rings that were ostensibly the focus of the documentary at its outset.

When the film opens, we find recovering gambling addict Zach Capp has left his job running Las Vegas’s largest nanny and housekeeping business. For three years, he’s been pursuing his dream of proving himself a filmmaker.

His subject? The maker of the world’s greatest onion rings—as dubbed once, a long time ago, by the Washington Post’s Tom Sietsema—which just so happen to hail from Nobles County, Minnesota. They’re made by a humble, attention-averse, aging man named Larry Lang.

For once, we’re not just #localangle-ing coverage of The Ringmaster, folks. Capp funds his project with an inheritance from his deceased maternal grandfather, a St. Paul philanthroper, and traipses all over the Upper Midwest breaking every cardinal rule of documentary filmmaking to tell the story of these onion rings—proustian relics from his childhood.

You know things aren’t going to end well when, early in the film, Capp says that Lang was hesitant to be involved in the project but, “He needs people to tell him what’s best for him sometimes.”

At one point, after throwing Lang a birthday party that didn’t pack enough of a wow factor to be his film’s ending, Capp admits that he “wasn’t going to stop until I achieved the most spectacular onion ring moment in the history of the world.”

After his crew mutinies and turns the cameras on Capp, directors Molly Dworsky and Dave Newberg swoop in to give an ending to the heretofore unfinishable work, and… find out what might become of Lang and his inimitable onion rings.

Settling in to watch The Ringmaster, you might expect something like an oddball, kinda sentimental documentary that wanders into modernist territory as the storyteller becomes the subject. Nice little deep-fried quilt to wrap yourself up in during election season, right?

The documentary is actually more akin to a Midwest version of Uncut Gems, where the hustle isn’t bling and opals but onion rings and franchise deals, and the famous people are Kiss in place of KG and the Weeknd.

Larry Lang feeds his signature onion rings to Paul Stanley during a scene in ‘The Ringmaster.’

Watching bad decisions pile up at such a frantic pace, made by so many “good” people, is quite a mood. On the other hand, watching crew members quit over these same choices and bicker over production company ball caps called “Capp’s caps” feels pretty cathartic, too?

Like Sandler, Capp just. keeps. going. when anyone else would’ve tapped out long ago—and watching those consequences play out on screen is cringeworthy. When they’re not enabling and taking advantage of his addictive behavior, the professionals Capp is wealthy enough to hire are unflinchingly capturing his every (wrong) turn. They also know well before Capp that Larry Lang is the subject of our compassion, not The Ringmaster’s leading man, which makes for an almost unbearable tension.

Dworsky and Newberg have made something that’s often hard to watch, even as it treats all its subjects with deep empathy, including Capp.

Come for a history lesson about Minnesota’s finest onion rings. Stay to watch a lot of filmmakers learn about boundaries, enabling, and addiction—harder to palate lessons that come in handy off screen.

The Ringmaster (88 min., released by 1091 Pictures) is available on Digital On Demand starting today, October 6. A portion of all proceeds from the film will benefit Alzheimer’s research, which plays an integral role in Larry Lang’s life.

The Ringmaster Official Trailer [HD] (2019) from Capp Bros on Vimeo.