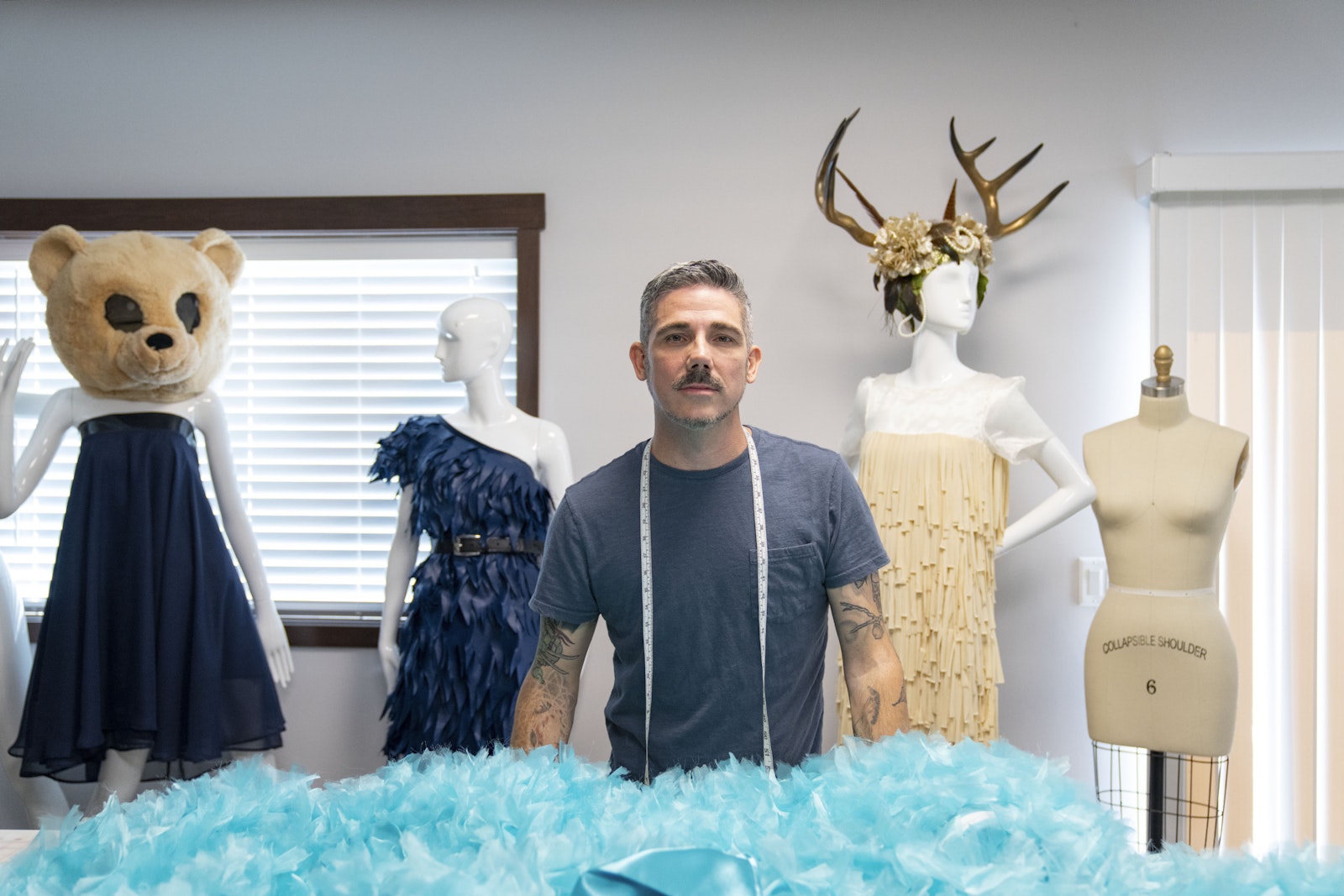 He tried and failed, tried and failed again until he propelled himself into the unrelenting limelight of “Project Runway.” And while he didn’t clinch the 2009 title, he wowed the Season 6 judges and won the hearts of fans.

The wildly popular reality TV show made Straub a household name. He went on to do other TV shows, create costumes for television and movies and design clothing lines for a national women’s store. But, as he proudly proclaims on his social media accounts, he “didn’t put on airs, he just went back home to Shakopee, Minnesota, and put on his Midwestern work ethic.” (Straub didn’t come up with the line, he admits. He just lives it.)

That work ethic has him curating fashion shows at Mall of America, making the rounds on local TV shows, crafting leather goods, manning a booth at the Minnesota State Fair and writing and illustrating children’s books — all while raising two boys and a flock of chickens with his husband.

We talked with the self-made designer about growing up poor in Edina, his most “out there” creations and how he went from being a nationally known fashion designer to telling the story of Albert the confused manatee.

I was surprised to learn that you were still living in Minnesota. Like other residents of our aw-shucks state, I figured you would have lit out for the coast once you got a taste of fame. Why did you stay on?

I feel to connected to Minnesota. I’ve traveled all over the country, all over the world, but I love the seasons. If I were to move anywhere else, it would feel inauthentic. Minnesota is my home.

So you grew up as an Edina cake-eater, huh?

Believe it or not, we were a poor family. Friends had original art on the walls and we didn’t even have electricity all the time. But I grew up in an industrious community. Everyone’s parents were leaders in their fields, whether it was as a doctor, a lawyer or an illustrator. To own a business and have a legacy was normal. That helped me a lot.

So you were industrious, even as a kid?

I wasn’t getting out and doing sports, but being able to make money was something I knew how to do. I started with a broken sewing machine — I had to fix it first. Then, I made hats and sold them door-to-door and wouldn’t stop until they were all sold.

Was that sewing machine your ticket out?

It was a tool I could use to create something out of nothing.

What was one of the first things you created?

The first garment I made was a pair of pants. I didn’t want to do something simple — the pillow, the knapsack. I only had so much material, so one side of the pants was purple, the other was ivory.

That sounds very colorful. Did you wear them?

Oh, yes. I wore them to hang out with my weirdo friends under the Edina water tower. It was the early 1990s, so I fit right in!

You take pride in the fact that you’re completely self-taught. So you never got formal instruction, never went to design school?

I should have one of those pennants that says “No school.” I was making products and selling them. I would have a booth at Pride or at Northrup King [for the artists’ markets]. I’d sell whatever I made. I was already doing my own work. What else was I going to learn? As it ended up, I did more educating than being educated.

So how were you discovered?

Discovered? Ha! That sounds so glamorous, doesn’t it? It’s actually lots of work. I first saw “Project Runway” when my roommate got cable. After that, I had one goal: to get on that show and be launched into the fashion world.

I applied for Season 3. To apply, you had to have a portfolio of your work, which I didn’t have. I had to make a bunch of stuff and have it photographed and fly to Chicago [for tryouts]. They said “You’re not ready.” And they were right. I wasn’t. I didn’t understand my aesthetic.

You also applied for Season 4 and 5, but didn’t make the cut. For Season 6, you made it a bit farther — past the physical, the drug test, the psychological test — and were named an alternate. Then what happened?

I got a call and they said “What are you doing tomorrow? Pack your bags, quit your job. We’re sending a [camera] crew to your house right now.”

And the rest is history?

I went from total obscurity to being on TV, in national magazines. There was a week when I was in four magazines. In one week.

After five weeks of grueling, nearly round-the-clock filming, you were eliminated the episode before the finale. You were also voted the fan favorite. What did that mean to you?

Since then, you’ve continued to design — pins and accessories, leather bags, custom men’s and women’s clothing, even your house in Shakopee. What’s the most “out there” thing you’ve created?

I did a fragrance for women’s store Maurices. It was called Be Amazing. At the time, perfumes were all baby power and gardenias. I chose a grapefruit top note.

Now you’re becoming known for your plush toys — from teddy bears and beagles to manatees and yetis. How did you go from the runway to the kid’s aisles?

The first toy I designed was a plush beagle named Cooper for Maurices. Maybe three years after, that I made a teddy from a serape I’d bought in Mexico. I wanted it to look 100 years old, so I made the seams exposed and put it in the drier. It got a huge response on social.

That spawned two businesses — Inside-Out Critters and memory bears. Do you really make all the plush toys you sell?

Yes, that’s me, making Critters and celebratory bears to memorialize a loved one, right here in Shakopee.

Is that how you got into writing and illustrating books for kids?

I have this manatee that I’ve been drawing since I was 10. I was on a flight somewhere when I got the idea for a book. I drew it and tried to get it published in the traditional way, but didn’t make any headway, so I did a Kickstarter campaign and raised enough money to pay my bills [for the book].

You produced two books — “Albert the Confused Manatee” and “Rocky the Confused Platypus” — before you and your husband, Ronnie Cooper, adopted two children. You’ve written five more since. How has being a dad changed your books?

Listen, two kids will change your life! We got two toddler boys and we had nine days to prepare to have them in our home. It was an expedited process. These kids needed a home. So I essentially took a year off.

My style of writing has changed. I realized I was writing books for the grandma or the parent or the uncle. Now I write for the kids. The books are shorter, rhyming, easy to read.

You’ve got a lot of irons in the fire — your leather goods and streetwear lines, fashion shows, local TV circuit, setting up booths at Twin Cities Pride and the State Fair to sell your merchandise and sign your books. How do you handle it all?

I definitely want to keep the books going. They have the most reach and the most impact. I’m working too hard and too much and I’m not working smart. But if it brought me no joy, I wouldn’t be doing it.

Connie Nelson is the senior editor for lifestyles for the Star Tribune.