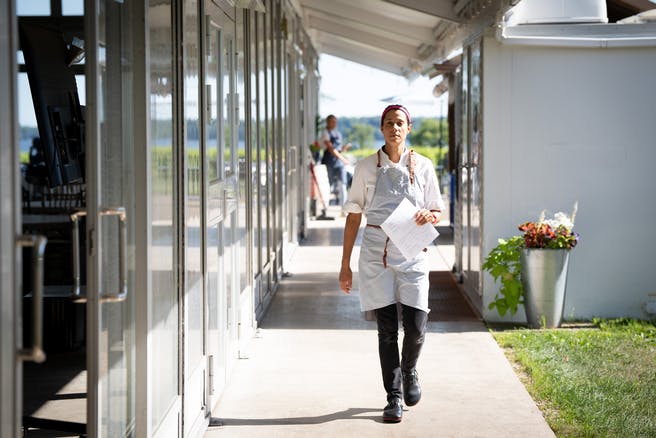 Gallery: Chef Jo Seddon walks through Gia at the Lake. Jo Seddon was a doctor in London before switching careers to follow her passion for cooking. Now based in Minnesota, the chef is leading the new Gia at the Lake, a seasonal Italian restaurant overlooking Lake Waconia and the vines at Sovereign Winery.

StarTrib: Jo Seddon was a doctor in London before switching careers to follow her passion for cooking. Now based in Minnesota, the chef is leading the new Gia at the Lake, a seasonal Italian restaurant overlooking Lake Waconia and the vines at Sovereign Winery. Twelve years into her career as a doctor, Jo Seddon decided she was done with the long, grueling hours on her feet, missing many nights with her young children.
…
So she traded hospital life for a chef’s life. “I exchanged one career with rubbish hours and not very good pay for another career with long hours on my feet and not very much pay,” said Seddon, laughing. “I guess the problem is with me.”

Now seven years into her second career, Seddon is still navigating work-life balance in a demanding, physical profession. But with the new restaurant Gia at the Lake, she may be onto something.

An outdoor-only venue overlooking Lake Waconia and Sovereign Estate’s tranquil vineyard, Gia at the Lake brings seasonal, farm-fresh Italian fare to a venue that only had pizza and cheese plates. With Seddon aboard, it has a cosmopolitan chef who trained at the famed River Cafe in her native London and was on the opening team of Gavin Kaysen’s Bellecour in Wayzata.

“It’s an amazing little project,” she said of the new spot, which requires her to prep everything in a commercial space in south Minneapolis and haul it to Waconia to finish in a makeshift outdoor kitchen. “We’re sort of in a camping environment here.”

With service only three nights a week, and only until early fall, Gia at the Lake might be Seddon’s ticket to reimagining the chef’s life as a family-friendly one.

Seddon, 42, went into medicine in her 20s, specializing in infectious diseases. (“When COVID happened, I was like, oh, thank goodness I’m not a doctor right now,” she said.)

But as much as she loved her specialty, something was missing. “I just kept on thinking that I’m trying so hard and I’m applying for jobs that I don’t even want.”

She always enjoyed cooking, and after having her second child in 2015, Seddon made the radical choice to leave medicine and enroll at Leiths School of Food and Wine in London.

“Suddenly, when I left medicine, it felt like it unleashed a part of my brain that I had suppressed,” Seddon said. “I didn’t realize I was a creative person.”

It helped that Seddon landed a job at the women-run River Cafe, the seasonal Italian institution on the Thames.

“It was really unfussy food,” she said. “Very ingredient-led. We used to write the menu twice a day. We’d just see what came into the fridge.” The supportive environment also disproved everything she’d heard about kitchen dynamics.

“It taught me that kitchens did not need to be like they were portrayed in all the documentaries and films, with abusive, shouting male egos,” she said. “It taught me how a kitchen can behave, and also ignited my passion to cook Italian food.”

Seddon also did a culinary internship at Daniel Boulud’s London restaurant, a connection that proved fateful a year later when her husband’s job in health care brought her family to Minneapolis. Her restaurant contacts introduced her to the city’s own Boulud protégé, Gavin Kaysen, and Seddon scored a job as a line cook when Kaysen opened Bellecour.

Kaysen noted the way Seddon’s experience working in hospitals was evident in the kitchen.

“She has such an incredible way of managing chaos, and managing people of all different ages and maturity levels,” he said. “It made her a very quick leader in the kitchen — somebody who a lot of people trusted right away. When you’re in the kitchen with her and you cook alongside her, you feel like she has your back.”
…

After taking a break from restaurants to have her third child, Seddon decided to make another change. She reduced her hours to part-time and leased a commercial kitchen — just before the pandemic hit.

“I was already in my mind leaving restaurants, and I was so lucky I got that space, because once everyone was furloughed, it was impossible,” she said.

Throughout the pandemic she catered small private events and sold meal kits to families. “It was a successful little business,” she said. “But once things opened up, I just felt like I didn’t really want to put food in boxes anymore.”

She needed to start networking to figure out her next move, and last summer went to an event of Les Dames Escoffier, a professional society for women in food and hospitality. The event was at Sovereign Estate.

Seddon admits to having some preconceived notions about what she’d experience at a Minnesota winery.

“On my way, I was thinking, the food will be good but the wine’s gonna be rubbish,” she recalled. “But I arrived here and I was like, hang on, the wine is really good.”

She found the venue on Lake Waconia’s shores delightful and kept coming back, wishing for a restaurant to open there. Finally, she contacted the winery’s owner, Terri Savaryn, and suggested she add another food option for winery guests.

Savaryn agreed — and hired Seddon to lead it.

“We both understood this was mutually beneficial,” said Savaryn, herself a chef who caters events at the winery. “Having a dining experience is going to be the best way to introduce people to the wine industry in Minnesota.”

Seddon’s vision impressed her. “Nobody else had the gumption to do it,” Savaryn said. “I appreciate the spunkiness that she had.”

You can still get a cheese plate to pair with wine in a cabana or on the main patio. Musicians often play, and picnic tables spread out toward the vines.

But keep walking past a grove of trees and you’ll spot the Marquette Pavilion, a graceful event space with a curved overhang. Tables are set underneath that arched awning, between the pavilion and a field that slopes toward the water. The lake breeze keeps the summer’s oppressive heat waves almost bearable.

“I just think, I get to come work here?” Seddon said. “At the end of the evening when we pack down, the light and the lake, it’s just a really magical space.”

Italy’s regional food culture plays a role, too. Braised kale and white beans hail from Tuscany, fried artichokes from Rome. (Seddon took her team on a tasting tour in Italy earlier this year.)

The children’s menu is just as thoughtful, with an appetizer of hummus and crudité served before a vibrant spaghetti and sauce.

The most challenging part is preparing all the food beforehand and bringing it to the winery to finish on the grill — “toing and froing,” as Seddon calls it. She churns ice cream on site because it’ll melt on the long drive.

But there’s no way to predict what people will order, and “sometimes we run out,” she said. “It makes me really sad if somebody’s made the effort to come here” and some dishes aren’t available. “That’s definitely something that keeps me up at night.”

An outdoors-only restaurant also puts an unfortunate time limit on Gia at the Lake, and on Seddon’s next career move.

“Once the weather turns cold, that kind of closes us down,” she said.

Savaryn has high hopes for the future of dining at Sovereign Estate, with plans to build out a permanent kitchen by next spring. “My goal would be to have a restaurant that would be the French Laundry of Minnesota,” she said, referring to the three-Michelin-starred restaurant in Napa Valley. “We’d call it the Minnesota Laundromat.”

In the meantime, Seddon hopes to find a space for a residency this winter. But opening a full brick-and-mortar restaurant is “such a big commitment in these uncertain times.”

And she’s still attempting to follow her passions on her own terms. “It gets to a point where I’ve worked many evening shifts in my life and maybe I didn’t want to commit to working those hours every single day of the year going forward,” she said. “My kids are only young for a short length of time.”

Gia at the Lake

Events now through the end of September at Sovereign Estate!