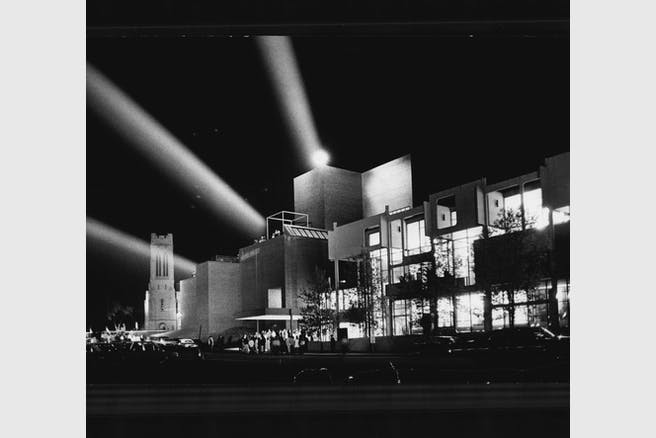 Kent Kobersteen, StarTribune
…
Opening night at the Walker Art Center in May 1971. “It is going to be one of those buildings that will change a lot of minds about what we can and should expect from the architects who design our new museums,” wrote New York Times art critic Hilton Kramer.

Star Tribune: On May 15, 1971, the public was invited inside a new Walker Art Center, and the Twin Cities would be forever changed — for the better.

The austere structure, a work of art unto itself, was a national sensation and instantly became a nexus of Minnesota cultural life.

Designed by architect Edward Larrabee Barnes, the new museum was also the opening salvo in a burst of 1970s civic optimism that rebooted the city’s profile.

Within a few years of the Walker’s debut, a Who’s Who of architectural talent had descended upon Minneapolis and produced the Federal Reserve Bank, IDS Center, Orchestra Hall, Peavey Plaza and a major addition to the Minneapolis Institute of Art.

The new Walker was certainly a career-making project for Barnes, launching him into the nation’s architectural firmament, and it was the right building at the right place at the right time: Its severe exterior (perhaps it was Barnes’ brick-and-mortar personification of the standoffish Midwesterner?) forms a series of cubes that anchor the foot of Lowry Hill like a Calder- and Warhol-filled medieval fortress.

The user-friendly interior stacks seven galleries in a corkscrew pattern around a central staircase/elevator core — an ingenious vertical solution to a cramped site — and the rise is so gentle that museumgoers barely notice as they ascend from one serene, loft-like gallery to the next.

Not only did Barnes create an ideal venue for viewing contemporary art (“The architecture is recessive and supporting; it won’t compete with what’s being shown,” he said in 1968), he designed a timeless landmark. It’s difficult to imagine Minneapolis without it.

The museum’s 1927 predecessor occupied the same swampy site. But by the late 1960s, the building was sinking so much that a 14-inch disparity between two of its corners was creating severe floor and wall cracks.

A study, led by Barnes, determined that the cost of renovating and expanding the existing building was prohibitive; starting over was the most practical solution. To rectify any foundation issues, pilings for the new building went down 150 feet to reach bedrock.

The Walker had also outgrown its cramped quarters. Museum director Martin Friedman stepped into his job in 1961 with the objective of creating “a strong public constituency for contemporary art” in exhibitions, lectures and classes, along with film, music and dance programming. Friedman’s plans required a modern facility.

Walker 2.0 delivered, boasting 50% more square footage for exhibitions, along with three rooftop terraces — arranged in a stepped format, mirroring the stacked footprint of the galleries inside — for displaying the museum’s growing collection of large-scale sculptures. There was also a cafe, a 350-seat auditorium and larger administration, storage and educational facilities. 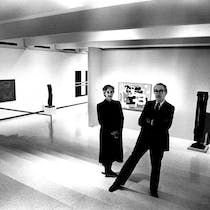 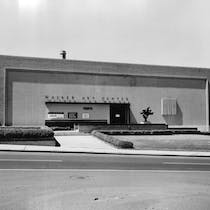 “Friedman is like a kid about his new building,” wrote Minneapolis Star columnist Don Morrison when the new Walker debuted.

There’s an understatement. Until his retirement in 1990, Friedman and his staff (including his wife, innovative Walker design curator Mildred Friedman) used their new playground to educate, entertain and enthrall Minnesotans through blockbuster exhibitions that championed the creative impulse of Japanese designers and the avant-garde de Stijl movement and explored the imaginations of David Hockney, Frank Gehry, Isamu Noguchi, Pablo Picasso and more.

Pre-Walker, Barnes had just one Minnesota project in his portfolio, a 1963 Orono home for John Cowles Jr. (then Walker board member and CEO of what was then the Minneapolis Star and Tribune newspapers) and his wife, Sage. The Walker was the New York City-based architect’s first museum project.

“Barnes said he considered his inexperience an asset because it allowed him to approach his design ‘without preconceptions,’ ” wrote Star columnist Peter Altman in 1968. “His museum will not be a theatrical or flamboyant statement, and it will not proclaim, as many museum buildings do, the wealth of its occupants through the brandishing of opulent decoration.”

The building’s stoic appearance was the opposite of its neighbor, architect Ralph Rapson’s elegantly playful Guthie Theater.

“We felt it would be better not to imitate the Guthrie,” Barnes told the Star in 1968. “Instead it will be a study in contrast, the Guthrie open and airy, the Walker solid and inward looking, one a foil to the other.”

Post-Walker, Barnes earned a number of significant commissions, including the Asia Society headquarters in New York City (1980), Midtown Manhattan office towers for IBM (1983) and the Equitable (1985), the Dallas Museum of Art (1984) and the Thurgood Marshall Federal Judiciary Building in Washington, D.C. (1992).

Barnes designed a small addition to the Walker in 1984, and four years later the museum dedicated his design for the Minneapolis Sculpture Garden, a collaboration with landscape architects Quinnel Rothschild & Partners. He died in 2004, a year before the Walker dedicated its major addition by the Swiss architectural firm Herzog & de Meuron.

“It was one of the best parties in years,” recalled the Tribune. “Opening nights were always great nights at the Walker. Who would have thought they’d be upstaged by a closing night?”

The museum, emptied of its collection, became a blank canvas for Champagne-fueled revelers, who were handed paint and brushes and used the walls as an opportunity to have their first Walker showing.

“The guests’ duty, it appeared, was not only to have a good time but to make sure there was as little as possible for the wreckers to do,” summarized Tribune writer Mike Steele.

Barnes had planned to clad the exterior in somber gray granite, but budget considerations led to the use of brown, plum-spotted brick. Thank goodness for cost consciousness, because that purple-ish masonry lends a welcome note of warmth to an otherwise chilly edifice, particularly during Minnesota’s gray months.

Unfortunately, the roof and walls leaked. In 2013, every brick (all 300,000 of them) was removed, a vapor barrier and more insulation were added and then new bricks (replicating the ones used in 1971) were installed.

“It will provide future museum architects with a model of elegant self-restraint,” is what Star columnist Altman predicted in 1968. How right he was.

“Mr. Friedman is now in possession of one of the best contemporary exhibition facilities in the world,” said the New York Times. Vogue was equally effusive. “The most exciting museum in America from the point of view of contemporary art,” chimed the magazine. “If the art world grapevine is to be believed, the action today is not in New York or even Los Angeles but, of all places, in Minneapolis, Minnesota.”

In 1972, Barnes’ design won the prestigious AIA Honor Award, one of nine winners selected from 470 entries. The jury praised the design for its “quiet eloquence that derives from the rigorous development of a conceptual theme, coupled with disciplined excision of superfluous rhetoric.”

How’s this for coming full circle? Last month, a 2017 renovation and addition to the museum, designed by Minneapolis-based HGA, won the same AIA award.