VOX.COM: Consumerism persists, even in quarantine. 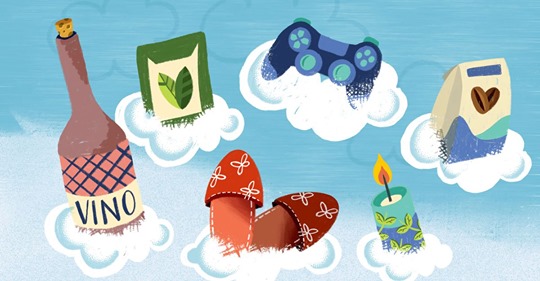 Illustration by Sarah Lawrence for Vox

Why we want to buy so much stuff we don’t really need right now.

My greatest concern at the outset of quarantine, I admit, was boredom while working from home and being stuck in my apartment for weeks on end. It was the very thing I had spent years avoiding even as a freelance writer, renting co-working spaces and going to cafes. So when I had reassured myself that the necessities were in order in my and my girlfriend’s apartment — enough food, toilet paper, disinfectant wipes — or at least available nearby, I embarked on an Amazon-enabled nesting campaign.

Anxiety comes in different varieties right now. We worry about the basics, like staying healthy and feeding ourselves. Then the second-order concerns emerge, if you’re privileged enough to be able to work remotely. The fear of boredom, coping badly with confinement, or not having the best equipment to do your work — those are anxieties, too, albeit lesser ones. So I bought some things that I thought might offer more comfort and stability: a fancy television, a bungee-cord office chair, and a door-mounted pull-up bar. I figured that the products might even be a net good for social distancing, since they would further discourage me from going out.

Quarantine is a confusing moment to be a consumer. So much “nonessential” business has ground to a halt, yet goods still have to be produced, marketed, and sold in order to sustain factories, companies, and, most importantly, the jobs they create. All the closed storefronts are just the symbol of people, particularly hourly workers, out of work. With a recession or even depression looming, we’re all worried about our livelihoods.

The quandary is, should we make ourselves comfortable in the short term by stockpiling whatever’s available, relying on exploitative digital platforms and putting pressure on the supply chain, or should we be saving money for the future? Quarantine consumerism is either a way of stimulating the economy one pull-up bar at a time, or it’s an unnecessary risk both for ourselves and for delivery workers. Still, it’s a risk many are taking. Plenty of distinctly nonessential products, like those I bought, are selling out.

When I described my shopping haul to Shipra Gupta, a professor at the University of Nebraska-Lincoln who studies how consumers react to scarcity, she differentiated between consumers’ utilitarian motivations and their hedonic motivations. Utilitarian motivations are functional, urging us toward buying necessities, especially when we perceive scarcity. Hedonic fulfillment is instead “derived from the perceived fun or playfulness of the shopping,” according to International Management Review. In a 2003 paper, Mark Arnold and Kristy Reynolds identify six categories of hedonic shopping. The most relevant right now, in the absence of physical interaction, are “adventure shopping for stimulation and excitement,” “gratification shopping to enhance mood,” and “idea shopping to stay current with trends.”

Such purchases might not be totally necessary, but they are an important way of exercising freedom that’s lost during a moment like quarantine. “Buying a TV was more about your hedonic fulfillment, trying to regain your lost control which the environment has given you,” Gupta said. In other words, we shop so we can feel some agency over this uncontrollable situation.

Chris Casey, a video producer in Brooklyn, was worried about losing his exercise habit without access to the gym during quarantine, so he mulled a set of PowerBlock weights on Amazon. By the time he made his decision, however, the maker said they weren’t available anymore, possibly because Amazon’s warehouses are now focusing on “household staples, medical supplies, and other high-demand products.” “I shouldn’t have spent so much time researching the different varieties of adjustable dumbbells, that’s what killed me,” Casey said. The same thing happened with a pull-up bar he tried to buy — it’s now back ordered. (It was from the same brand as mine, marked as Amazon’s pick.)

Buying this kind of stuff is an obvious attempt to replace the pre-quarantine lives that we’ve been forced to leave behind. “In some ways, we’re overcompensating,” Hyman said. He described his thinking: “If I usually go to a cocktail bar and order a gin drink, but I can’t keep a full bar stocked in my apartment, what’s the best tonic I can get?” We’re craving a few symbols of normalcy in the midst of a terrifying situation. Substitutes for real life are everywhere: Liquor sales are up more than 75 percent over the same time last year, since all bars are closed. Missing cafes, I’ve been sure to stock up on fancy-ish coffee beans; sure enough, even the oat milk that you used to get in a cappuccino is now seeing sales growth of over 500 percent, according to Nielsen. Mirror, an at-home virtual-gym portal, is going through a boom in sales and class attendance as an IRL gym replacement.

Even when consumers need to buy simple necessities, there’s a materialist tendency to seek out the nicest, best versions that we possibly can. And if the best isn’t available, some people get frustrated. Steve Sando is the founder of Rancho Gordo, a seller of heritage beans grown in Mexico. A few weeks ago, he announced that Rancho Gordo wouldn’t be fulfilling orders to its Bean Club — a group of subscribers who get quarterly shipments of rare bean varieties — because of an inundation of quarantine-related new orders. Orders went from around 200 a day to consistently over 1,000. Some Bean Clubbers got mad. “One guy said, ‘You’re reprehensible, Bean Club is what made you and you won’t be loyal to us,’” Sando told me.

He understands why they’re upset. “A well-stocked pantry means you’re in control. You can’t control what’s around you but you can control what your family’s gonna eat.” Still, Sando said, “We had a great harvest this year, there’s no point in hoarding them.” The Bean Club beans are already set aside; it’s just going to take more time to ship them out to customers. “My staff’s sanity is more important than anything,” Sando said. Rather than trying to push output, he is spreading out workers in the factory and has hired more for a new second daily shift.

The same thing is happening to seed companies like Baker Creek, a seller of heirloom seeds in Missouri (heirloom seeds are marketed as more genetically diverse and longer-lasting than their industrial counterparts). Jere Gettle started the company in 1998. Y2K caused a growth spike and so did the financial crisis; right now he’s seeing double his usual volume of orders. On March 19, the company had to shut down its website to deal with the overflow. Still, they’re getting emails from aggrieved first-time customers asking if their seeds will get shipped. “People are afraid,” Gettle said. “I don’t blame them on this one.”

Even the content of the orders is coronavirus-influenced. There’s an emphasis on “things that are rich in vitamins and minerals; people want to grow healthy food,” he said. But, “we’ve seen a decrease in sales from Chinese varieties.” Gettle attributed that to customers’ association of coronavirus with China; the perceived risk is, as he said, obviously “not logical.”

Worrying about which brand of seed, bean, pull-up bar, or television to buy is an indulgence when so many people can’t afford to stay home in the first place. Quarantine purchases might be less about the actual product than some vestige of conspicuous consumption, the need to project your class identity as a response to insecurity. Our jobs aren’t the same, our social lives aren’t the same, but the appeal of maintaining a high-status image remains.

That these products are in such high demand makes sense, according to Wharton professor Nikolai Roussanov. “I think conspicuous consumption has evolved in the era of social media, so that you can still show things off even under quarantine,” Roussanov said. “Objects that were once classified as less visible, like home furnishings, become more so when everyone is stuck at home and interacts with each other over videoconference and social media.” The coronavirus could actually end up intensifying the retail market for upscale domestic products. “I wouldn’t be surprised to see an uptick in luxury durables that are used inside the home if social isolation measures continue,” he went on.

The composition of our shopping has changed, though the overall scale of consumption may not have, according to Homa Zarghamee, a professor of economics at Barnard. “We’re buying things that are not what we were buying three weeks ago, and not buying things we were buying three weeks ago.” Groceries instead of restaurants; loungewear instead of suits. Zarghamee observed it herself with video games: “The night before the quarantine started in New York, the line at the GameStop in Harlem was around the corner.” There’s a real sense of urgency at play. “It’s not totally clear that buying sooner isn’t better than buying later for yourself,” Zarghamee continued. “It’s also unclear what you would be buying in the future and whether the prices are going to be reasonable.” Maybe the TV was a good purchase after all. It’s certainly getting a lot of use.

Pursuing your hedonic motivations during quarantine is always going to benefit yourself more than other people. But that doesn’t mean it can’t be made more equitable. Zarghamee told me that an individual’s impact on the possibility of a recession is limited, so that’s not an excuse for shopping more. What’s actually impactful is thinking about which businesses you want to survive. “There’s an obvious need to support the ones that are going to help in the near future,” Zarghamee said. Amazon will be just fine. If you need to splash money around, do it at a local bookstore, boutique, or deli that’s moved online. It’ll make you feel more in control just the same.