Vogue: It’s already been a great year for readers. 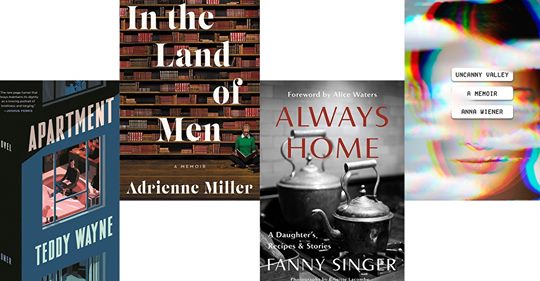 If we must live in a surveillance state, it might as well be under the attentive eye of Anna Wiener, whose memoir, Uncanny Valley (Farrar, Straus and Giroux/MCD), is equal parts enchanting and subversive. The New York native graduated into a recession and found a job at a New York literary agency that paid mostly in prestige. Seduced by tech’s lucre and ostensible utopianism, Wiener moved west, where life proved eerily comfortable for a hard-driving millennial. Her account of living inside the Bay Area bubble reads like HBO’s Silicon Valley filtered through Renata Adler; Wiener is a trenchant cultural cartographer, mapping out a foggy world whose ruling class is fueled by empty scripts: “People were saying nothing, and saying it all the time.” The book’s author does the very opposite. — Lauren Mechling

Teddy Wayne’s noir bromance Apartment (Bloomsbury) is set in 1996, back when successful authors enjoyed godlike status, and the young men who dreamed of joining the pantheon had no social media platforms where they could act out their fantasies. The unnamed protagonist of this novel is surrounded by self-regarding professors and students who find no favor with his workshop submissions. The one exception is Billy, a charismatic Midwesterner who sees promise in his classmate’s pages. Billy sleeps in the basement of the dive bar where he works—until the narrator extends an invitation to live with him in exchange for cleaning and companionship. What follows is an amusing, increasingly uneasy account of an odd couple and their unstable power dynamic as Billy’s star rises, and his host, whose heart is “clamped shut like the shell of a stubborn pistachio,” comes to accept that their bond is not all it’s cracked up to be. — Lauren Mechling

In the Land of Men by Adrienne Miller (Ecco, February)

In the Land of Men

The high-flying New York literary scene of the ’90s is also the backdrop of Adrienne Miller’s memoir In the Land of Men (Ecco). Miller was an erudite and self-possessed college graduate who came to Manhattan and found work in men’s magazines, first at GQ, then, at 25, as the literary editor of Esquire. Up against the industry’s unapologetic sexism and her own impostor syndrome, she developed a façade of unflappability. Two decades later, she recounts her years as “improbable gatekeeper” and spins an elegy for the glory days of American magazines, with cameos by Norman Mailer, George Plimpton, and Dave Eggers. The star of the show, though, is David Foster Wallace, who used to crank-call the young editor and quickly became her greatest confidant. So began a long-distance love affair that defied definition and, in the clear light of 2020, propriety. Their “rhizomatic conversations” were playful, fun, and vexingly slippery. What a treat to listen in. — Lauren Mechling

When Fanny Singer was a baby, her mother, the culinary demigod Alice Waters, would take her to Waters’s famed Berkeley restaurant, Chez Panisse, swaddle her in fresh dish towels, and place her in an extra-large salad bowl while she worked. Singer attributes her lifelong love of greens to these “early kitchen cribs.” “It was definitely an unconventional upbringing,” concedes the 36-year-old by phone from San Francisco. Singer’s memoir, Always Home: A Daughter’s Recipes & Stories (Knopf), out this month, is a tender portrait of the woman better known to the world as the mother of the farm-to-table movement. — Chloe Malle

For 14 months, Athena Calderone ping-ponged between the East and West Coast and farther off to Copenhagen and Lyon for her latest book, Live Beautiful (Abrams), produced with photographer Nicole Franzen. By the end, she was left with a collection of design magazine–worthy photographs, but also a number of shots that captured her from a less glamorous vantage. “I was looking at the behind-the-scenes photos, and there were all of these images of me in somebody’s shower,” she recalls with amusement. — Lilah Ramzi