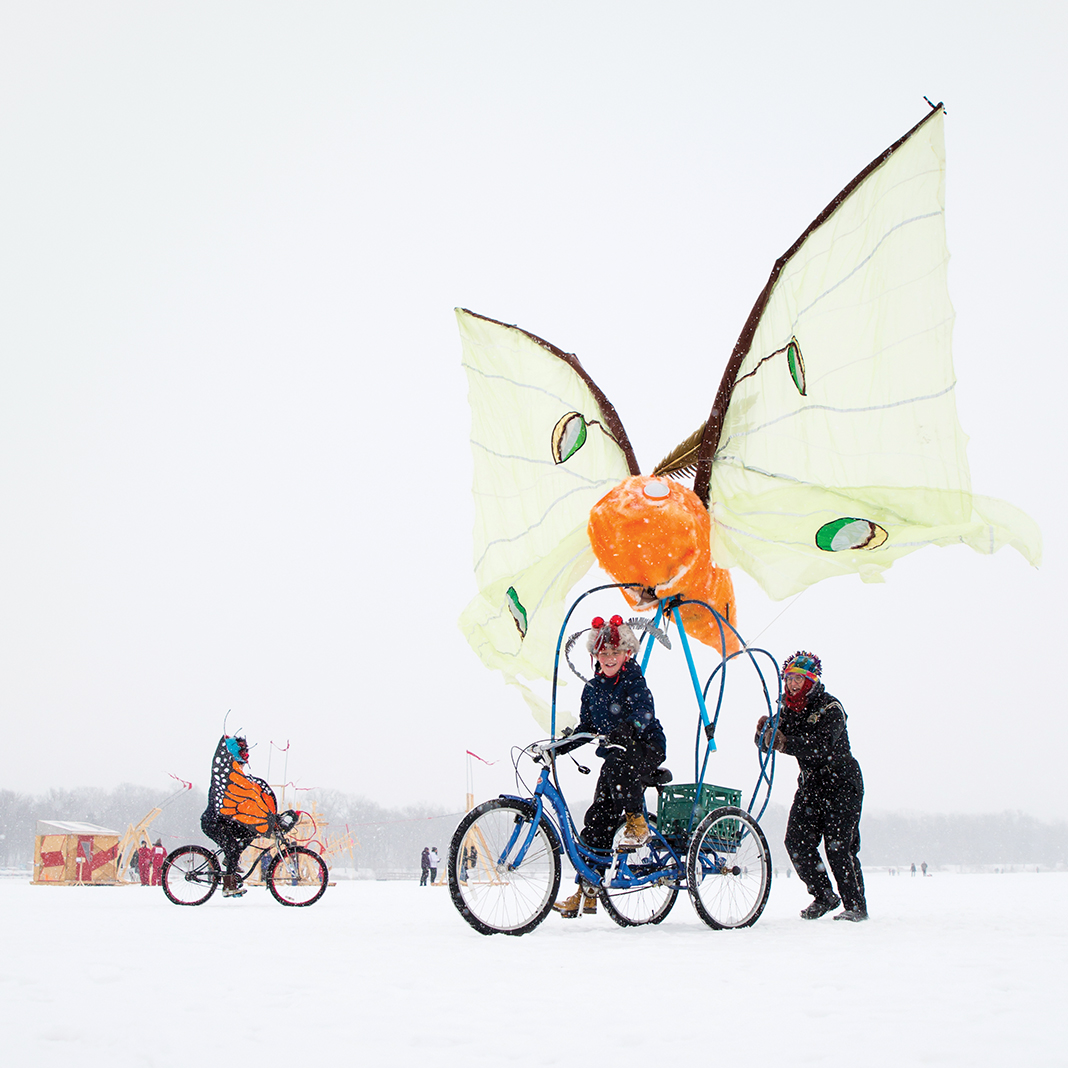 When the Art Shanty Projects started, in the winter of 2004, it was just one structure, built by a small group of artists on top of Medicine Lake, in Plymouth. The Department of Natural Resources requires ice shacks to have reflective siding, a visible permit. But however many walls. Whatever design. In this case: a plywood hut that worked as a camera obscura and invited guests to make their art.

A couple years later, the Art Shanty Projects drew a crowd of 5,000. In 2014, the January-to-February pop-up village moved its conceptual shacks to the larger White Bear Lake, now as a nonprofit. Relocating to Minneapolis’ Lake Harriet, in 2018, saw attendance rise to 40,000—double the previous record.

By then, folks had fond memories. A 2016 shanty with ice-to-ceiling piano strings made a plucked instrument of the lake. Another looked like a double-decker bed, with slumber-party games inside. The recurring Monarch Migration Shanty replicates the balmy clime of butterflies’ Mexican wintering spot. Outside, you can hop on a winged bike. And there were the performances, too: a wandering choral group, a pedal-powered polar bear booming about climate change.

One year, guests scanned the outskirts—which isolate the Art Shanty Projects, like a subzero Burning Man—to spot a woman striking poses in a fox costume. Locals came to view the semi-annual happening as ritualistically Minnesotan: hardy, lake-centric, and exalting the fish house atop a couple feet of ice.

“I don’t know of anything similar,” board co-chair Jason Buranen says. “You’ve gotta have lakes that actually freeze, and a large enough population to support an event of this size.”

By fall of 2018, artists had new ideas on paper. But then the news hit: The Art Shanty board had missed out on a critical grant. Without usual support from the Minnesota State Arts Board, they were short more than $85,000. They wouldn’t return that season, or maybe ever.

Like that, the Art Shanty Projects joined other local arts institutions—from parades to theater companies—sinking through financial thin ice. Responding to outcry, the board held community meetings. Cut the number of shanties, fans suggested, or days. “It can be summed up as ‘We want Art Shanties to come back, however you make that happen,’” Buranen says.

A few weeks later, an anonymous donation put money to mouth. It covered more than half the cost of two seasons. “That donation was made completely out of altruism,” Buranen marvels. “That injected so much new energy and enthusiasm into the board—and the project as a whole.”

This year, the Art Shanty Projects return to Lake Harriet from January 18 to February 8. Artists met one another in November, at St. Paul’s Lake Monster Brewing, with childlike giddiness. “They’re figuring out who’s who and what kind of connections they can have with each other and what kind of fun rivalries,” operations director Arlo Sombor says. They swapped insights: Build with easy-to-assemble modules; the cold puts power tools on the fritz. Someone showed off a thermal-imaging device. “Infrare won’t look like much from the outside—just blank walls,” artist Robin Garwood explains. “But when [visitors] approach one of the stations around the shanty, hidden content will be revealed by infrared cameras.”

The artists mingled with members, too. Part of a new funding model, these fans pay $2 to $20 a month for special events, deals on merch, and discounts at sponsoring businesses, such as Lake Monster. Their fees eke out donation and grant dollars.

“We’ve always taken donations, but we’ll be a little bit more clear about how important it is this year,” Buranen says, including with a notice at the gate.

The Art Shanty board decided to stick with four weekends, and they booked the usual 20-some shanties, plus 12 performing acts—all compensated. “It’s not directly in our mission statement, but part of ‘expanding the notion of what art can be’ means bringing it to more people and making it more accessible,” Buranen says, “to visitors as well as artists.” Cutting shanties felt counterproductive.

Erin Lavelle, new artistic director and producer for last year’s Northern Spark art festival in Minneapolis’ American Indian Cultural Corridor, has taken that ethos further. “When I participated as an artist [on 2016’s slumber-party-themed shanty], it felt like a very white-male-dominated festival,” she says. “We shouldn’t rely on the open call to get a diverse crowd of artists. There may be barriers that we don’t know about.”

So, in addition to the open call, the Art Shanty team reached out to three community organizations. These groups will do what many of the other artists, selected by a jury, aim to do this year: translate off-ice realities into on-ice fantasies.

The board homed in on inclusivity this year because, 16 years in, they have operations down pat. It started with the move: Lake Harriet, after all, makes access a little easier. “As someone who didn’t have a car until very recently, I could get there on the bus,” recalls Sami Pfeffer, a metro-based multi-disciplinary artist.

Pfeffer debuted the Archive of Apologies and Pardons project on a smaller scale last year at Northern Spark. Participants wrote down actions they regretted, or offenses they wanted to forgive. They archived them in sections—such as for racism, sexism, or transphobia.

Compared to last year’s 500, the Archive shanty expects thousands of entries. Pfeffer (with co-creators Oz Grinager and Essie Schlotterbeck) wants to add audio recording, for folks who can’t hold pens. And, for the many families who come out, a simplified kids’ version.

“I often talk with other artist friends about the frustration of trying to make art outside of insular spaces,” Pfeffer says. “Something I feel drawn to is that the shanties don’t just attract an artist crowd.”

Elsewhere, American Sign Language interpreters, audio descriptions, and kick sleds (for those with limited mobility) broaden what used to be an “accessibility weekend.”

“If you’re willing to bundle up, then we want you there,” Sombor says, “and we want you to see things that you can engage with and that reflect things back at you.”

After Archive, guests might plug up a giant Lite-Brite; chant self-affirmations in an amphitheater; lob projectiles at presidential hopefuls in a carnival-style game; assume leadership over a shipwrecked crew; sketch their surroundings via camera obscura; dip inside the returning Monarch Migration Shanty; or get down on the light-up dance floor of a mini First Avenue nightclub, called the -7° Entry Danceteria. There, local hip-hop artist Rz Shahid processes life’s setbacks, making “unpleasant situations into something to groove out to.”

In these scenarios, Pfeffer sees another way the shanties peddle accessibility. After moving here from North Carolina, “I expected winter to be isolating,” they say, “and there are components that are isolating­. But there’s so much room for coming together in the cold months, and the shanties have been really pivotal in my framing of that.”

This year especially, the jury chose artists keyed into context—beyond straight whimsy. One of the three community groups, the Native American Community Development Institute (NACDI), worked with the local Bibsy Bustle Productions on a shanty about the 2020 Census. Homelessness disproportionately impacts Natives, and this factors into their historically undercounted status. Participants in the Pyramid of Quantification will tally themselves among fellow “fish, bird, and insect nations.” Here, the medium—of a house in the middle of a lake—feels uncommonly apt.

Another group, zAmya Theater, raises awareness about homelessness. The Minneapolis-based performers—often spotted mid-scene or mid-song with passersby—gets site-specific, inspired by the dangers of enduring a Minnesota winter without shelter. They invite guests round a fire, and may seek respite among shanties, Lavelle says.

The third group, Minneapolis-based Better Futures Minnesota (also a sponsor), works with formerly incarcerated men. It partnered with artists (including Art Shanty co-founder David Pitman) on The Holding Shanty. Here, visitors reach through holes to form faceless bonds with those outside.

“It’s not pretentious. It’s outside of the gallery environment,” Lavelle notes, “and it really allows artists to experiment.” Through interactivity, the shanties workshop serious social problems. Unmoored from the city, they nonetheless resemble a festival, too, sharing the ice with food trucks.

For one group of artists, this sounds like utopia. Interesting Tactics, a Minneapolis collective of architectural designers, brings “utopic spatial practice” to the lake this year.

“Utopia is a process, and it’s not a physical space,” designer Drew Smith says, citing 16th-century philosopher Thomas More as an inspiration. “[Interesting Tactics] thinks that utopia doesn’t happen on a city scale … but it can happen in real life on the scale of objects that people can use. So, like, furniture, or a greenhouse on ice.”

Flora Sauna is that greenhouse on ice. The team’s thermal-heated, solar-powered, plant-populated shanty will feel like “a misplaced memory of summertime existing in this really cold space,” Smith says. After that space thaws, they hope to move their deep-winter hothouse into a phase “beyond just the ephemeral art piece.”

All the shanties live on, and not only thanks to financial revival. Visitors might bring activistic stirrings, or just fresh takes, ashore. “We’re offering an alternate winter experience for people,” Lavelle says. “It doesn’t have to painful, cold, sad, depressing, you know?”

The Art Shanty Projects run Saturdays and Sundays from January 18 to February 8, with a membership drive at Lake Monster Brewing on January 2.