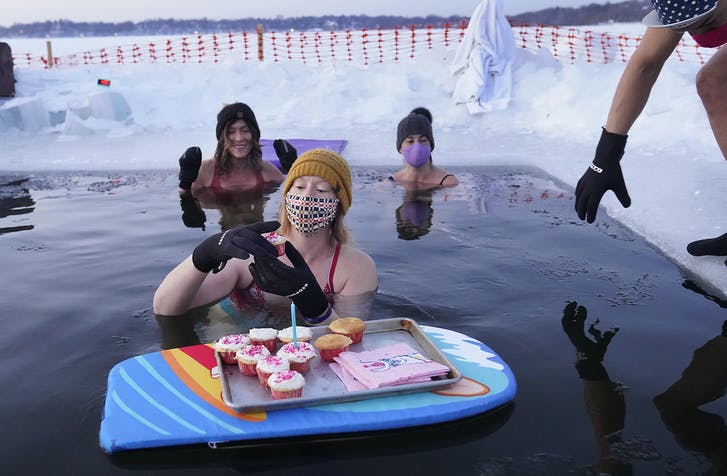 Before sunrise, a group of winter water bathers known locally as the submergents, went for a dip in Lake Harriet Wednesday in Minneapolis. Here, Nicole sampled a birthday cupcake brought by a fellow bather for her 42nd birthday Wednesday and passed around on a floating device. Many participants extoll the health benefits they say come from bathing in the frigid waters, as well as the camaraderie and mental well-being that can come from meeting and sharing the experience with other winter bathers. Participants wear masks and socially distance in the icy waters. Most of those participating asked not to have their names used out of fear that it could lead to police contact.

Star Tribune: A shirtless Steve Jewell went for a dip Wednesday morning in frigid Lake Harriet, something he has been doing almost daily since the onset of winter. And scores of other people have been joining him in getting their day off to a chilly start.

As many as 40 people who call themselves “submergents” regularly show up at the south Minneapolis lake just before 8 a.m. for a brief polar plunge off North Beach. The frosty dunks have been occurring since November.

“It’s fun and it breaks up winter,” said Jewell, 63, who took his 63rd plunge of the winter season Wednesday. “I have not had a cold since I’ve been doing this. I come out sharp. It perks me up.”

The Weather Channel took notice and featured the group in a December special. Minneapolis Park Police have noticed, too, and have discouraged the practice. At times, officers have threatened to issue citations to plungers, Jewell said.

But no officers were on hand Wednesday when the daily swim commenced at 8 a.m. sharp. The police would have soured the festive mood: one of the plungers was marking a birthday, and the all-ages group celebrated with cupcakes floating in the water.

“This crowd is social,” Jewell said. “I meet a lot of people I would not have met otherwise.”
…

Most learned about the daily plunges from friends, who then invited others. Others saw them on social media by following #lakeharrietplungers and #submergents.

Both men and women come to the “Harriet Magic Hole” at all hours of the day, some in the morning, others at noon or just before sunset to catch “the beautiful scenery,” Jewell said.

Because of COVID-19, plungers wear masks and social distance, he said, and extra care is taken to ensure safety. The group erected a fence around the 11-by-11-foot hole, where posts were drilled into the ice and dug into the sand 3 feet below the lake’s surface. A plastic mesh fence surrounds the ice hole, which offers a ladder leading to the water to keep plungers from accidentally stumbling into it.

Even with those precautions, cutting holes more than 10 inches in diameter in lakes in the Minneapolis park system violates Park Board ordinance and requires a permit, said spokeswoman Dawn Sommers. The board grants only one permit per year for such activity, for the Special Olympics to conduct a Polar Plunge on Bde Maka Ska.

“The person or entity altering the natural feature creates a liability, and therefore must assume the liability if someone were to become injured because of the alteration,” she said.

Sommers also added that fencing must be secure enough to keep people out of the hole when it is not being used, or guarded with 24-hour security. Park staff “has been trying to educate people on our ordinances, our permit processes, and the inherent dangers to ice bath users, as well as park visitors using the lakes for other activities,” Sommers said.

Jewell said there are many benefits to a quick dip in the lake. Extremes, he said, help the immune system fight off infections.

There was no immediate word on whether the Park Police might stop the popular dives. But Jewell said this weekend’s forecast bout of prolonged subzero temperatures certainly won’t.

“It will be a real challenge,” he said. “We have not had to deal with that yet.”