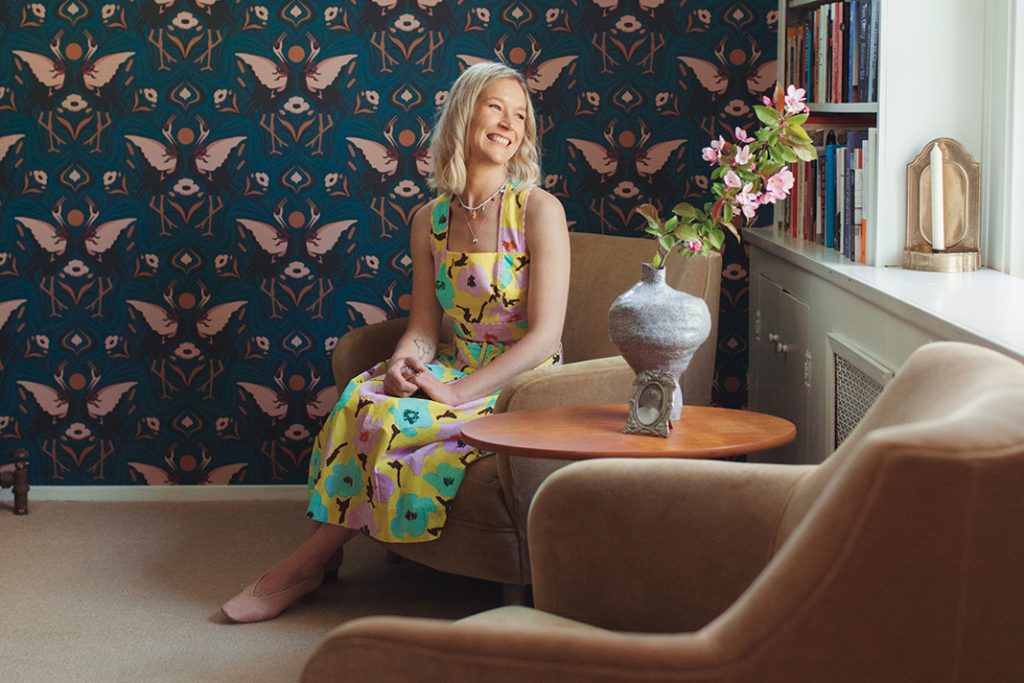 Midwest Home: Emily Vikre, mom of two and co-founder of Vikre Distillery, poses in her combined library, art studio, and office space—a sensational room packed with pattern and color.
…
“I’ve never felt I had a single calling,” says Emily Vikre, co-founder of Vikre Distillery. Her resume proves it. The Duluth native has worked as a science journalist, museum educator, food writer, and photographer’s assistant—plus earned a stack of degrees (including a Ph.D.) along the way. She says she has always leaned heavily into her creative side, noting her “undergrad thesis was an illustrated poem about vesicular transport at neural synapses.”
…

Vikre’s imagination was nurtured by a happy childhood in Duluth, where she roamed her neighborhood and explored the woods in a tightly knit community that celebrated holidays and marked the seasons together. She also spent time each summer in Kjerringvik, Norway, with her Norwegian mother’s extended family.

The spark to start a craft distillery came from Vikre’s parents, who attended a spirits tasting in 2011 and recounted the experience to Emily and her husband, Joel, when the couple were visiting from Boston, where they lived at the time. Emily recalls, “They said, ‘Did you know all you need to make great spirits is great grain and great water?’ And I said, ‘Well, Duluth has the best water anywhere.’ Then it hit us—someone should start a distillery here.” The couple returned home, started researching, wrote a business plan, and moved back to Duluth. In 2014, they launched their very own Vikre Distillery with three gins: Juniper, Cedar, and Spruce.

Their son Espen, 8, was born in 2013 and younger brother Vidar, 4, followed in 2017. The family settled into a four-bedroom house in the Hunter’s Park neighborhood, one block from Vikre’s parents. The bright 1920 home is filled with art she has been collecting since high school, along with a few antiques from her grandparents and great aunt in Norway. 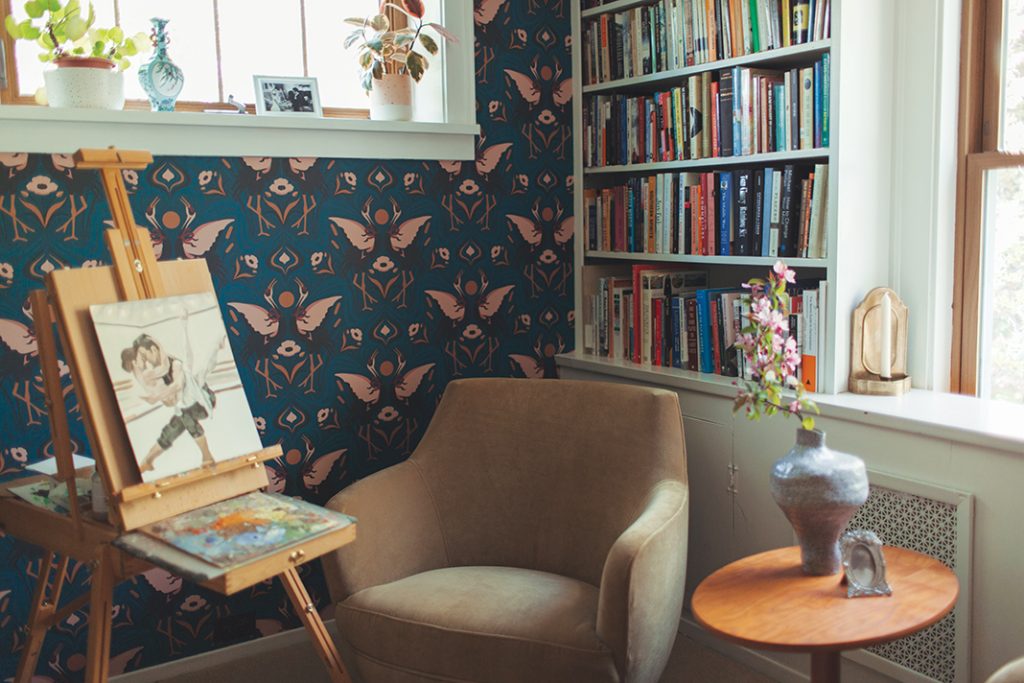 Vikre says she always carves out a spot for the kids to work on creative projects but admits they end up doing art all over the house. “My friend, Siri, is an interior designer, and I remember her saying she wanted a dining table that constantly has paint and marker on it. That stuck with me.”

In addition to being a mother and CEO at Vikre Distillery, Emily is also the author of two books, on the board of several Duluth nonprofits, and an exceptionally clever party planner. Her backyard soirées have themes ranging from Alice in Wonderland (candelabras, a giant rabbit, and a custom cocktail called “Drink Me”) to Winter Olympics (with a mini biathlon, ice skating, and curling competitions using brooms from the house). “I love a good theme,” she says. “The structure gets my creative juices going, and sometimes, I just want to dress up.”

Do you have a wildly impressive bar cart at home? We did have an adorable bar cart at one point, but now it’s an art cart, which I highly recommend. It’s the highest calling for a bar cart. My cocktail stuff is tucked away in the kitchen. I have a bunch of vintage glasses and an embarrassingly large array of spirits.

What do people not know about Duluth? Duluth is the woods masquerading as a city—there’s so much green space and wildlife, but at the same time, there’s an amazing music and art scene. It’s a great balance.

What are some of your favorite local spots? We’re frequent fliers at Love Creamery,
and we get pizza from LuLu’s Pizza almost every week. For art, I like the Joseph Nease Gallery.

Any party-planning tips? Plan activities. Have a craft table, or ask a friend with a big personality to come up with a performance piece or toast to give the occasion an air of festivity. It’s more fun when guests have something to do besides just eating and drinking.

What’s the worst pronunciation of Vikre (VEEK-ra) you’ve ever heard? Valkyrie, which is kind of awesome.