Save His Name: The Grassroots Race to Preserve George Floyd Murals 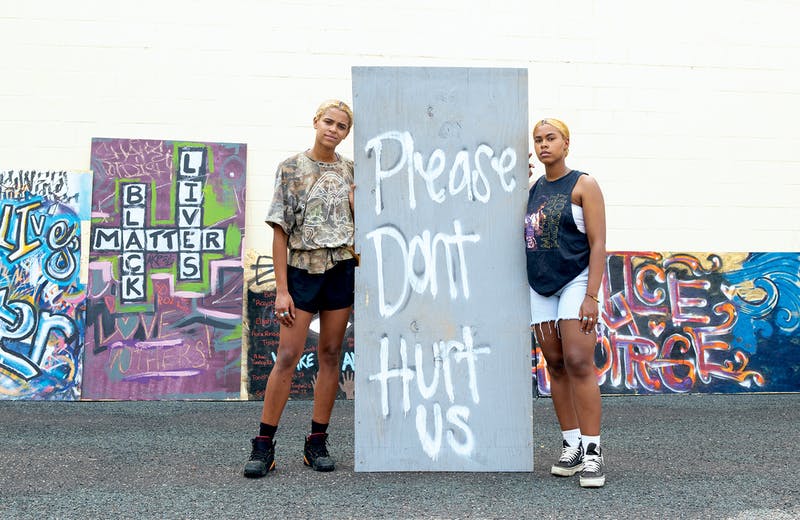 “When the art was first up it was healing for me. And it’s not any more, only because I’m hyper-aware of it disappearing,” Zellner-Smith says. “I’m very aware of groups of people trying to take it and not make sure it’s still here for the Black community.”

When she started Save the Boards, Zellner-Smith wasn’t planning to become a grassroots conservationist. She’d just moved and started a new role at work, and she didn’t have a background in the arts, or preservation, or history.

But interest in her movement grew, and the account quickly amassed followers. (It has nearly 2,000 now, less than two months after she made her first post.) After she shared a few posts with ideas for keeping the art accessible, Paper Salon in south Minneapolis’s Corcoran neighborhood reached out via Instagram. They were removing their murals and wanted to know if Zellner-Smith had any interest in picking them up.

She did. And after she posted about that first collection, more and more people started reaching out. Soon she was regularly borrowing her dad’s truck and filling it with plywood, bringing it back to her parents’ place. Walking around their yard in early August, she guesses she has about 20 on their property, with another 40 or so in storage. She’s done dozens of pickups herself, with occasional help from friends, family, and roommates.

Zellner-Smith isn’t the only one collecting and protecting boards. She recently connected with Leesa Kelly of Memorialize the Movement, another young Black woman who’s been gathering boards and getting them to the African American Heritage Museum and Gallery in north Minneapolis.

“I just felt so hopeful seeing the boards, seeing the plywood murals coming up, seeing the art around 38th and Chicago,” Kelly says. “I thought, ‘If we could use this to tell the story of what happened here this summer, we could really make an impact and keep this movement going.’”

Kelly raised just shy of $5,000, which she donated to the museum in June. She and Zellner-Smith have since become conservation collaborators, texting ideas back and forth, seeing if one can pick up a mural for the other, and figuring this thing out as they’ve found themselves in the position of board stewards.

“It’s like, we don’t know what we’re doing, but cool,” Zellner-Smith laughs.

“That’s really true!” adds Kelly. “We’re both like, is this a thing we should be doing? Where do we go from here? I think for both of us, we did not expect this project to blow up the way that it did or be received so positively.”

Zellner-Smith has lived on Minneapolis’s south side her entire life; Kelly moved to the Twin Cities from Chicago in 2017, not long after the murder of Philando Castile.

“It fills me with so much sadness, because you would not think Minneapolis and St. Paul are the type of cities where this would happen because they’re so progressive,” Kelly says. “You see that like, it doesn’t matter where you are, Black lives still don’t matter to cops, and to a lot of people.”

“People were just done,” Zellner-Smith says. “To see it happen, again, on video, again, it was just like, when does it stop? When does one acknowledge what’s really happening?”

And again, already, there’s the worry that people are forgetting. As the boards disappear, so does the visual reminder of what Minneapolis went through. The two share concerns about where the art is going; Zellner-Smith says a number of people have been out taking pieces without a second thought about where and to whom they belong.

One artist recently reached out and said they wanted Save the Boards to have their work—but when they asked the business where their work was displayed about getting it back, they were directed to “some random white guy” who took it because he wanted to put it up. That artist is still trying to reclaim it. Zellner-Smith has encountered other people—often white—who’ve been collecting boards for “auctions” or fundraisers, though when she asks for specifics, their answers have been vague.

She thinks that shouldn’t be allowed to happen; it’s not what the boards are about.

“It’s greedy, in a sense,” Zellner-Smith says. “Black pain, trauma, and healing—it shouldn’t be profitable in any capacity.” At this point, if she sees boards lying around, she grabs them, photographs them, and tries to find the artist. “I’m saving anything I see on the ground, or I deem a board that doesn’t have a home. It’s a fight for the boards.”

And sometimes it really is a fight. A few weeks ago, she and a friend pulled up to the Hi-Lake Shopping Center near the epicenter of the riots, where some of their favorite pieces were and where many of the boards are already gone. While they flipped through a pile of boards in the back by a dumpster, a security guard came over and told them they were trespassing.

“It’s a hunt,” Zellner-Smith says. “And when you do find them, it’s like finding a gem.”

Kelly still goes out with the Jeep on occasion, but says that right now, it’s more about maintaining relationships with businesses that haven’t taken the boards down yet and staying connected with the handful of other organizations—like Victoria Theater Arts Center and Springboard for the Arts—that have been collecting pieces. “Looking toward the future of what everyone’s doing with their boards, and reminding them, softly, ‘Hey, we want to make sure the only Black-owned museum in the state has an opportunity for this,’” she says.

Eventually, her hope is to have an exhibit at the African American Heritage Museum, but that’s going to take some time to plan. The museum is small, and the boards are very much not. She doesn’t want to cram a bunch of plywood and people together, so the show might happen later this year or sometime in 2021.

And beyond collecting and preserving the boards, Zellner-Smith is figuring out what making them accessible to the community means. One of her early ideas was to turn them into Little Free Libraries: “But that’s not realistic. We live in Minnesota.” Many of these murals are not painted on high-quality wood; people were hastily pulling materials out of musty basements at the last minute.

“I’ve had to transition from wanting the actual physical boards to be in the community permanently into: How can we value the life of the art, and then death of it, but still have it remain?”

What if instead, we built new Little Free Libraries, and artists who painted boards memorializing George Floyd painted an outline—like a coloring book—then let people from the community paint them in? She’s teamed up with the Stevens Square Community Organization, and they’ve agreed to help build three little libraries. Zellner-Smith hopes that in one, they’ll have strictly Black literature; another could hold personal care items and hygiene products; the third could store nonperishable food items.

“Things that we can have accessible, and restock, and have right here in the community—and that will help with growth here, help anyone in need.”

Another project in the works is to blow up photos of the murals into massive banners that could hang on, say, the Basilica of St. Mary, where they’re widely visible and not so easily forgotten. There are so many photos of the murals; what about a digital archive? Is there a way to connect people who took pictures of pieces that have gone away since May and form a complete collection of the works that sprung up during that time? (A pair of professors at the University of St. Thomas are currently trying to do that with the George Floyd and Anti-Racist Street Art map.) Or maybe, businesses that don’t need plywood protection anymore would be willing to display a decal in their window of the mural that was once there while the pieces themselves stayed protected in storage?

“It’s hard because in time, they are going to start to wither away, no matter how much we try to garnish and plaster them,” Zellner-Smith says. “They’re just not material that will last.”

She imagines bringing the pieces outside once a year, on the anniversary of George Floyd’s death, for a community-wide remembrance—“Not a celebration, but just making sure we remember what our city went through, what our community went through, what his family is going to go through for the rest of their lives.” It could be an outdoor exhibition where the pieces are laid out like a map: Here’s Hennepin you’re walking down now; here’s Lake Street. Black vendors and small-business owners would sell food and art.

“It adds a lot more value and significance to the pieces, I think, if in 10 years I could go to this show on May 25 with my kids,” Zellner-Smith says. “Let’s bring them out on his death anniversary. Let’s honor his life, his legacy—and honor the uprising of Minneapolis that ignited the rest of the country and the world and made everyone listen.”

“People are still out protesting. Kenda and I are doing this work. You’ve got all these organizations who have sprung up out of this—people like me and Kenda who were regular civilians working 9-to-5 jobs and going about our lives have stopped everything in support of this movement,” Kelly adds. “That’s really inspiring. That’s really powerful. I’m honestly really surprised that it happened here, but I’m so proud to be a part of it.”