Carol Hauck is marking the centennial of women’s right to vote! Chaska, MN 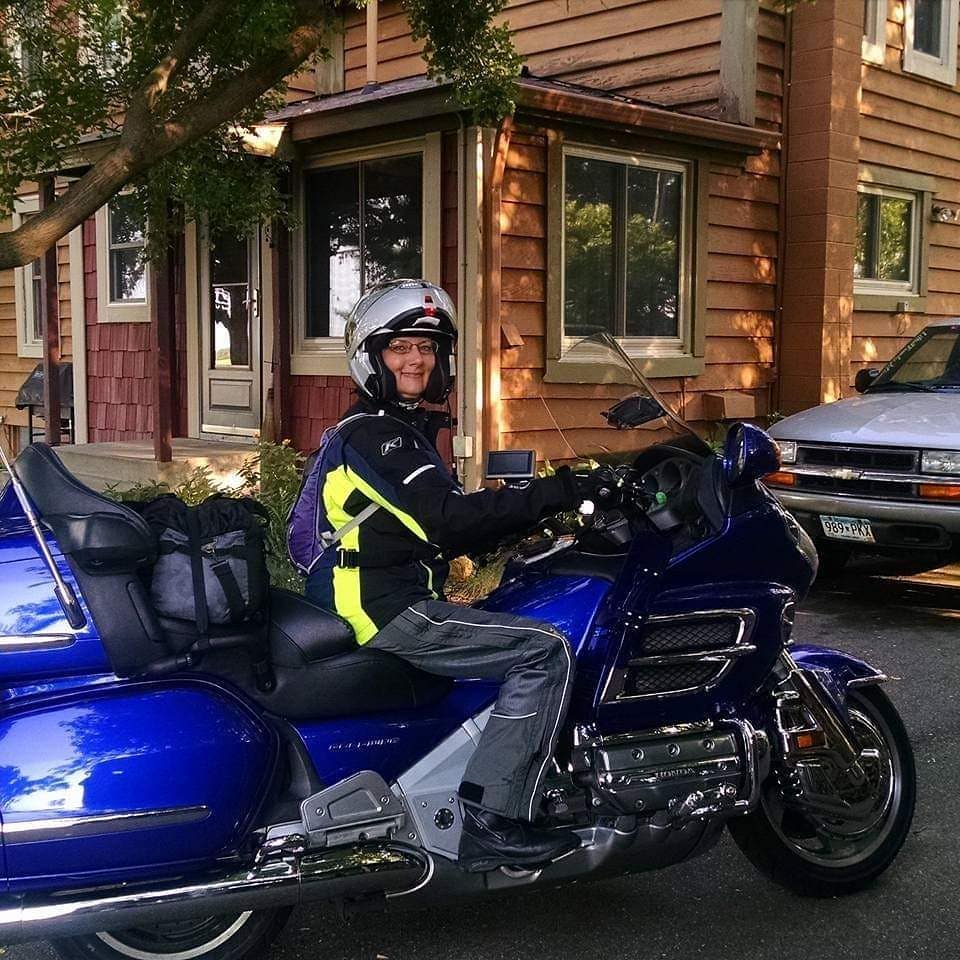 Carol Hauck is marking the centennial of women’s right to vote in a surprising and appropriate way — by riding a motorcycle across a big swath of the country.

The retired IT consultant from Chaska will join six other women in the commemorative ride. Their goal is to roll into Knoxville, Tenn., on Aug. 18, 100 years after the Volunteer State became the 36th to ratify the 19th Amendment, giving it the majority needed to become a part of the U.S. Constitution. They’ll make several stops along the way to pay their respects to suffragists and their movement.

While a motorcycle ride might seem like an unusual way to honor a fight for equity, it echoes suffragists’ love for two wheels.

In the 1890s, bicycles offered women a measure of independence and mobility and allowed them to take part in social issues. In fact, women were said to be “riding to suffrage on the bicycle.” In the years leading up to the 19th Amendment’s passage, suffragists took up motorcycle riding and became the first women to ride cross-country.

This year, many centennial celebrations have been canceled or downsized because of COVID-19. The Minnesota History Center’s “Votes for Women” exhibit has been moved online, and events created by the Women’s Suffrage Centennial Commission have gone virtual.

Even the official “Suffragist Centennial Motorcycle Ride” has been pushed back to 2021. Still, Hauck and the others are taking a truncated version of the ride planned by the Women’s Motorcycle Tours company. Founder Alisa Clickenger decided to ride part of the route as a scouting mission for the larger event next year.

She led a cross-country tour in 2016 to mark the 100th anniversary of Augusta and Adeline Van Buren’s groundbreaking 5,500-mile motorcycle journey. The two suffragist sisters were the first to make the cross-country ride on their own motorcycles. They followed Effie Hotchkiss, who made the trip a year earlier on a Harley with her mom, Avis, riding in the sidecar.

“What better way to celebrate women’s freedom than on the ultimate freedom machine — a motorcycle?” Clickenger said.

In 1916, when the Van Burens rode across the country, in many states it was illegal for women to wear pants. The sisters were arrested more than once on their westward journey from New York for doing so.

When Hauck first started to ride in 2002, she was able to “dress for the slide not the ride,” wearing abrasion-resistant nylon riding pants and jacket, boots and gloves and a full helmet when on her Honda Gold Wing touring cruiser.

She got her motor­cycle license after what she describes as divine inspiration.

“It’s been a long journey, but I believe that God gives you all your wants and desires,” she said. “And that desire came to me in about 2000: I decided I wanted to ride a motorcycle.”

Skip, her husband of 41 years, and three grown kids have been supportive of her passion for the road, she said.

“My family loves that I am able to go out and have adventures,” said Hauck, who has earned a “Saddle Sore” award for riding 1,500 miles in 36 hours from the Iron Butt Association. She’s also done some off-road training on a trail motorcycle.

Hauck joined Women on Wheels, a nonprofit organization for women riders, and loves the camaraderie she finds among motorcyclists.

“I don’t know if you’ve noticed that when motorcyclists pass each other, as we’re coming toward each other, we always put our arm out in a wave,” Hauck said. “There’s absolutely a brotherhood or sisterhood that goes along with that.”

She has taken historical bike tours through Minnesota and other states, and met Clickenger several years ago at the National Motorcycle Museum in Anamosa, Iowa, after reading Clickenger’s book “Boost Your Confidence Through Motorcycling: A Woman’s Guide to Being Your Best Self On and Off the Bike.”

The two met again at a motorcycle show in Minneapolis, where Hauck made plans to be a part of the Suffragist Centennial Motorcycle Ride.

Hauck, who is also a member of the Christian Motorcyclists Association, usually goes to the Sturgis, S.D., rally with the group each year “for a lot of fun riding and a little bit of ministry.”

She’s set to head toward Sturgis this year before joining the Centennial women riders. But because of the pandemic, she plans to avoid the crowds and only make a swing through town before heading for the Black Hills.

“I personally am very much into social distancing and wearing my mask, but still getting out there and doing what I want, and being respectful of everybody around me,” Hauck said. “I’m a very adventurous woman. But I’m not a Sturgis-type-of-biker woman.”

A route of honor

The suffrage movement had its beginnings in the decades before the Civil War, but evolved gradually across the country, as approaches changed and alliances shifted.

In the early 1900s, the movement gained momentum, with a growing number of individual states granting women the right to vote. Suffragists made a national push to amend the constitution, but Congress didn’t pass a federal amendment until June 4, 1919 — and only after the Spanish flu pandemic delayed and nearly derailed the campaign.

It took more than a year for the amendment to be ratified by 36 states. Some states — like Wisconsin, the first to ratify — quickly mobilized, others stalled and some voted “no.” Congress approved the final paperwork on Aug. 26, 1920.

While it hasn’t been finalized, the route for the dry-run ride will hit some of the suffragists’ hot spots.

All the women but Hauck plan to depart from Oregon, the 25th state to ratify, and where Abigail Scott Duniway, publisher of the New Northwest newspaper, worked for more than 40 years to secure the right to vote, first casting a state ballot in 1912.

They’ll ride across the top of Idaho, which granted women the right to vote in 1896, and where former servant Minnie Priest Dunton — one of the few prominent suffragists who didn’t come from a privileged background — rose to become a state librarian.

After a couple of nights in Montana, where suffragist Jeannette Rankin became the first female member of Congress in 1916, it’s on to Wyoming, which granted women the right to vote in 1869, when the state was still a territory.

Hauck will leave Minnesota, which became the 15th state to ratify the amendment in September 1919, five years after Minneapolis suffragist Clara Ueland led more than 2,000 women in a march through the Twin Cities.

Hauck will meet up with the other riders in South Dakota, where a century ago, suffragists like Alice Pickler used the slogan “Women are people” in their campaigns, a reference to the state’s motto, “Under God the People Rule.”

Then it’s on to Iowa, which hosted one of the nation’s first suffrage parades in 1908, and Illinois, the first state east of the Mississippi to grant women the right to vote and home of journalist, civil rights advocate and suffragist Ida B. Wells. They’ll also cross Indiana, where Quakers organized the first statewide suffrage convention (which also backed the causes of abolition and temperance) a decade before the Civil War.

The women plan to spend several days taking part in Knoxville’s centennial celebrations, which include a motorcade parade, Clickenger said.

Before it was postponed, about 1,000 people had signed up for the ride. Clickenger said she hopes that at least as many women and men (who can join if they are invited by a woman rider) can make the journey next year.

The fight isn’t over

Winning women the right to vote didn’t enfranchise all U.S. women, something that Clickenger and Hauck acknowledge. And the amendment’s centennial coincides not only with the pandemic, but also with a time of intense racial reckoning with our nation’s history.

One hundred years ago, many white women leaders refused to work with Black suffragists. Some even used racist and anti-immigrant sentiment to further their cause. While 1920 marked a huge step for white women, Native American women could not vote until 1924 and people of color were unable to fully exercise their rights until 1965, when the Voting Rights Act passed.

Even as they celebrated their success, some early suffragists knew the fight was far from over. On the day that Minnesota ratified the amendment, Ueland told fellow activists, “Today is the commencement rather than the end of our work.”

Clickenger said that she believes the suffragists of 100 years ago would be astonished by how far we’ve come — and the glaring inequalities that remain.

“I think they’d be shocked that on so many levels we, as women, have achieved so much, yet on other levels they’d be astonished that with all our talents, wisdom and expertise, that we still have to advocate for equal pay and equal treatment,” she said.

“I also think they’d be awed that so many women carry their torch to this day. Women are out there in the trenches right now, getting people registered to vote, getting them interested in politics and social change. Ultimately, I think the suffragists of yesteryear would be delighted that our society has continued to allow for wonderful freedom of expression.”

That includes herself, Hauck and the rest of their small crew, Clickenger said, who will be “celebrating our own personal power with horsepower.”

Carol Hauck is marking the centennial of women’s right to vote by riding a motorcycle across a big swath of the country. The retired IT consultant from Chaska, pictured above, will join six other women in the commemorative ride, making stops along the way to pay their respects to suffragists. "I think that they would be honored to know that they’re being respected for what it is that they did," said Hauck. "I think they would be happy to have some other women, who are probably as badass as they were, trying to do it." This year, many centennial celebrations have been canceled, postponed or downsized because of COVID-19 — including the official "Suffragist Centennial Motorcycle Ride." Still, Hauck, founder Alisa Clickenger and the others are taking a truncated version of the ride planned by the Women’s Motorcycle Tours company. "What better way to celebrate women’s freedom than on the ultimate freedom machine — a motorcycle?" Clickenger said. But winning women the right to vote didn’t enfranchise all U.S. women, something that Clickenger and Hauck acknowledge. One hundred years ago, many white women leaders refused to work with Black suffragists. Some even used racist and anti-immigrant sentiment to further their cause. Clickenger said that she believes the suffragists of 100 years ago would be astonished by how far we’ve come — and the glaring inequalities that remain. "I think they’d be shocked that on so many levels we, as women, have achieved so much, yet on other levels they’d be astonished that with all our talents, wisdom and expertise, that we still have to advocate for equal pay and equal treatment," she said. More to the story, written by Erica Pearson, in the link in our bio. 📸: @carlosgphoto

← A new statue honouring Prince has been installed at Paisley Park Save His Name: The Grassroots Race to Preserve George Floyd Murals →
more people/passions