Ralph Lauren revises his vision of the American Dream, inspired by the style of HBCUs 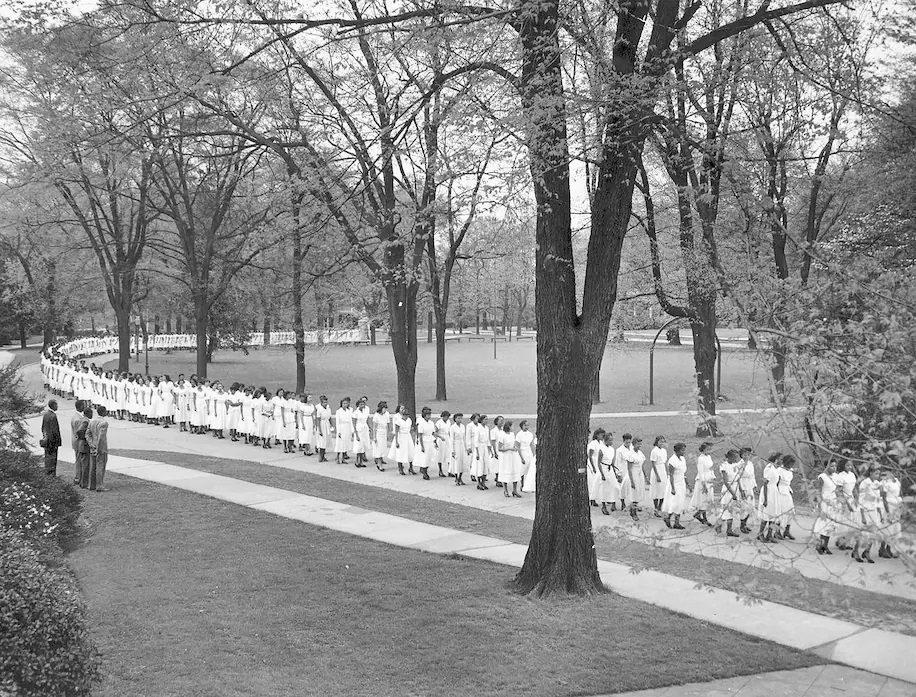 …
“His new collaboration with Morehouse and Spelman recognizes the fashion history of Black students.”
…

The Washington Post: It’s not a new story. It’s a more complicated, more nuanced version of an old one. So ultimately, it’s a better story.

The clothes debuting Tuesday in a Polo Ralph Lauren advertising campaign — the tweed soft-shoulder blazers, the Fair Isle sweaters, the pretty white eyelet dresses and one perfectly aged cotton canvas stadium coat — are familiar to anyone who has been schooled in the narrative of the American Dream, which is to say, most everyone. They aren’t the sort of clothes that nudge fashion trends into uncharted territory, and they aren’t flashy exemplars of financial success. Like all garments, they’re an expression of identity. But these are, most importantly, an enduring declaration of belonging.

This country doesn’t have anything that might be called a national costume, but certain garments help folks visualize what it means to be that self-invented notion: an American. It’s a challenging persona to fathom. Despite popular culture equating it with blond and blue-eyed, Americans aren’t defined by race or ethnicity. They aren’t defined by their family tree. But still, we stubbornly try to cast an American ideal in human form — an embodiment of all our conceptions about our national character, which include the glories of bootstrap advancement, the power of clear-eyed optimism and a soft-focus romanticization of our rebellious past.

No other designer has been more central to helping us paint a picture of those yearnings and aspirations than Ralph Lauren. Since he founded his company in 1967 based on a single product that encompassed both tradition and possibility — a tie that was slightly wider than the norm — he has been creating clothes that are deeply rooted in the idea of heritage even as they aim to put a bright, shiny polish on contemporary times. He has been inspired by the beautifully dilapidated country cottages of the Atlantic Coast and the wide-open spaces of the West, as well as Wall Street gods, country club scions and big men on campus.

For more than 50 years, Lauren has been writing a tale about what it means to be American. And now he’s made a significant edit. It isn’t so much a correction as it is a clarification.

His new advertising campaign, which includes photographs, picture books and a 30-minute film, announces a partnership with Morehouse College and Spelman College, two institutions rich in both tradition and prestige. They are two of the historically Black colleges and universities that educated Black students during segregation and continue to do so today as predominantly White institutions typically treat Black history as a niche subject to be discussed in the safety of a singular department rather than a discipline intrinsic to the American story. The story of Blackness is a part of our collective history that can cause discomfort and because of that is especially under assault these days.

The clothes in this licensing agreement with the two schools were mostly photographed on students, graduates and faculty — against the backdrop of the two campuses, which neighbor each other in Atlanta. The collection was inspired by images from the schools’ archives of students dating back to the 1920s as they gathered on the yard, in a classroom or on the playing field. Composed of some 100 items, the collection includes the crested jackets favored by Morehouse men, the signature Spelman white cotton attire — which remains a tradition, along with pearls — and the varsity jackets and crew neck sweaters that are staples of the broad college vernacular. It would be tempting to call these looks Ivy League style. But that’s only because those who had the power to codify elements of American achievement didn’t account for Black students. Princeton and Harvard preceded Morehouse in existence, but what was worn on the campuses up North in the 1950s, when they became defined by sack suits, Oxford shirts and rep-stripe ties, was also worn on the campus of Morehouse, which was founded in 1867.

Lauren has shifted his gaze to take in a new vista that has been there all along but one that he simply didn’t see. Until, one day in 2020, he suddenly did.

In the aftermath of George Floyd’s murder, in the midst of racial justice protests sweeping across the country, at a time when the populace was profoundly divided, the company’s 23,000 employees gathered in groups virtually for conversations that were intended to be open and honest about the tumult around them and the questions that it raised. In one, the founder asked James Jeter a simple question: “How are you doing?”

“He said, ‘Great. But you know, I’m not sure that this is going to be my future,’ ” Lauren recalled during an interview last week. “I said, ‘What do you mean by that?’ And he said, ‘Well, you know, I just don’t know if this is the path. Is this a company that’s going to be all White? … What’s the story with this company?’ ”

Essentially, Jeter wanted to know: “Who are we?”

“When he said that to me, I was sort of surprised and I said, ‘James, there is a future here for you,’ ” Lauren said. This collaboration with Morehouse and Spelman may well be proof of that.

Jeter is one of the New York-based company’s design directors, and he’s spent the entirety of his professional career at the brand, starting when he was a stylish, Black teenager obsessed with the company’s aesthetic and working on the sales floor at a Rugby Ralph Lauren shop in the Georgetown neighborhood of Washington. Jeter climbed the corporate ladder from intern to design associate to a lead designer. He is also a Morehouse man from the Class of 2013. And he educated his boss on what that meant.

“I knew nothing about it,” said Lauren, including the aesthetics of HBCUs, the “Divine Nine” Black fraternities and sororities, and the Black collegiate experience.

“James told me,” Lauren said. “He brought in these books, because he went to Morehouse, and said, ‘This exists.’ He felt that the world has always thought Ivy League [style] was only White people. This exists; the college exists; the taste levels existed. And we looked through some books and he showed me the school and I said, ‘This is beautiful. I love it.’ ”

“I’m not a pioneer. I’m not trying to take something I don’t [own], but I’ve always been very honest about what I believe,” Lauren said, “and I always try to do the right thing.”

Personal presentation has always been part of the story at Morehouse and Spelman, which has focused on classic liberal arts education rather than vocational training. The students dressed to express personal dignity, as a statement of academic intent and as an ode to respectability before that word implied a certain political surrender. The collaboration with Ralph Lauren “centers Morehouse in the American story. You look at those pictures and you can see the connection to the same fashion sensibilities that have defined Ralph Lauren. They were at Morehouse before Ralph Lauren was even born,” said Morehouse President David Thomas. “If we really think about Morehouse in the period of those pictures, if we hadn’t had racial discrimination, many of those young men could have gone to the best colleges in this country. Many could have ended up at Ivy League colleges.”

The images are both a reminder of the ways in which this country has failed to deliver on its promise but also a celebration of how Black Americans succeeded despite those core lapses. Thomas, speaking slowly and deliberately, repeats something that he said years earlier in a campus speech that continues to resonate: “Morehouse is an idea in the same way that America is an idea, which is that in this country, you can create Black male excellence at scale,” Thomas said. “Ralph Lauren is one of our cultural icons. And Morehouse is a cultural and, more importantly, an educational icon of what the country could be.”

The photographs most certainly are advertising and marketing, but they’re also selling consumers on an idea — and Americans on their shared history.

“We didn’t sort of design this collection through the lens of HBCUs to say this is sort of the Black way of dressing,” said Jeter, who oversaw the collaboration. “It’s really American style. We only changed the context and not really the clothing.”

Like a lot of companies, the Ralph Lauren Corp. has wrestled with diversity and inclusivity. In the 1990s, the company first addressed the issue head on after Black and Hispanic store employees raised the alarm about discrimination, about being sent to the stockroom when important executives visited the store. The brand also has a substantial history of diversity in its advertising dating back to that same time, when Black models Tyson Beckford and Karen Alexander served as de facto faces of the brand while many other fashion houses were nonchalantly showcasing all-White catwalk casts.

In the wake of racial justice protests nearly two years ago, the company signed on to the Black in Fashion Council, which aims to increase diversity on Seventh Avenue, and it independently pledged to build a leadership team that was 10 percent Black and 20 percent people of color by 2023. Still, around that same time, the company was taken to task for using the Greek letters of a historically Black fraternity to adorn a pair of trousers without the organization’s permission. The road toward equality and cultural sensitivity has a multitude of switchbacks.

“The beauty of what Ralph Lauren did with us: They made us part of this project,” Morehouse’s Thomas said. “They didn’t come in and appropriate culturally inspiring images of Black people and then go off and do something with it.”

There are those who might look at this collection and see it as an anachronism at a time when track pants and leggings are as dressed up as many people want to be. There’s a polish to these images that may feel stilted at a time when improvisation is valued. The entire project is a risk in an era when social media watchdogs are always on the prowl for missteps. Yet when Dara Douglas, who oversees the Ralph Lauren library and is a Spelman graduate, speaks about the collection, her voice shakes with emotion.

“I know how the other women who’ve graduated from Spelman, the other men who graduated from Morehouse, all of the people who have attended an HBCU, there’s so much reverence and respect for the Ralph Lauren brand,” Douglas said. “For us to see this culture and see this community turn the gaze back to them and show them themselves — it’s going to be tremendous. It’s overwhelming.”

Spelman President Mary Schmidt Campbell agreed to this collaboration, in part, because the project drew on archival imagery from the school and was a kind of contemporary version of a series of photographs of Black men and women at home, at school and at work commissioned by W.E.B. Dubois at the beginning of the 20th century.

“I thought it evoked an aspect of our history and heritage that we don’t talk about and we don’t see very often on the public stage,” Campbell said. And it was no small thing in Campbell’s estimation that this was also a business deal that could benefit the school’s bottom line and that the project had a Black creative team that included Douglas, one of Spelman’s own.

Lauren, 82, noted that he was not keen to talk about this collection but was persuaded to do so by his staff. Not because he isn’t proud of it and proud of the work that both Jeter and Douglas have done. But because these are treacherous times to stumble, to correct course, to try. Capitalism affords a man nearly everything but the benefit of the doubt.

The Art Of Banksy Making It’s Mark ln The Heart Of Minneapolis!