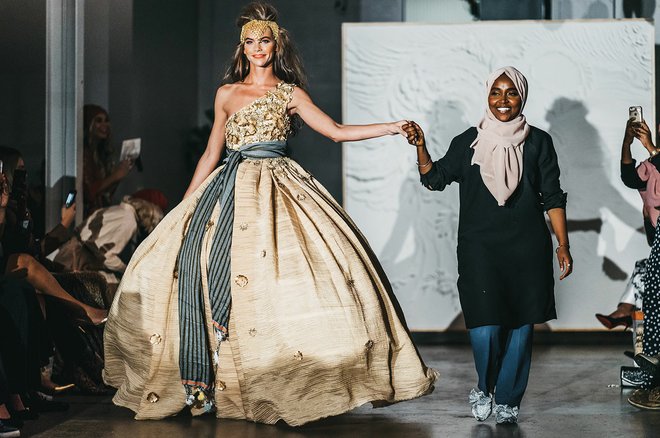 Ramadhan “Rammy” Mohamed developed her love for fashion at a young age. While she always considered design a potential career, her family had other plans for her.

Mohamed, an Oromo refugee from East Africa, attended the University of Minnesota, where she received her degree in business. “Growing up, my family worked predominantly in medicine and didn’t view fashion as a lucrative career,” she says. So, Mohamed pursued one in accounting. Unable to ignore the creative void she felt, two years later, she decided to follow her dream of becoming a designer.

“I’m not sure I fit into the traditional box of fashion designers.”

Fast-forward to October, when Mohamed presented at Fashion Week MN with a 30-piece collection that juxtaposed traditional aspects of East African culture with contemporary and modern features. Her pieces were some of the most memorable to hit the local runways. Everything was beautiful, from the colors—inspired by a spice market in her hometown, Finfine—to the luxe fabrics, beading, and embroidery.

The road hasn’t been easy. Mohamed has received 20 rejection letters for design jobs around the Twin Cities. Once, after arriving at a meeting to showcase her work, a front desk employee informed Mohamed they weren’t hiring parking attendants. “I’m not sure I fit into the traditional box of fashion designers,” she says.

Nevertheless, talent talks. Mohamed has won every design competition she’s participated in (including the Boston Scientific Hearts for Fashion at MOA). “All of this has humbled me and pushed me forward,” she says. “In some ways, the rejection has encouraged me to continue connecting with the incredible people in our small but strong fashion community who are making strides in inclusivity.”

Currently, Mohamed designs out of her house turned studio, where we lucky locals can make an appointment to shop existing pieces or dream up something custom.