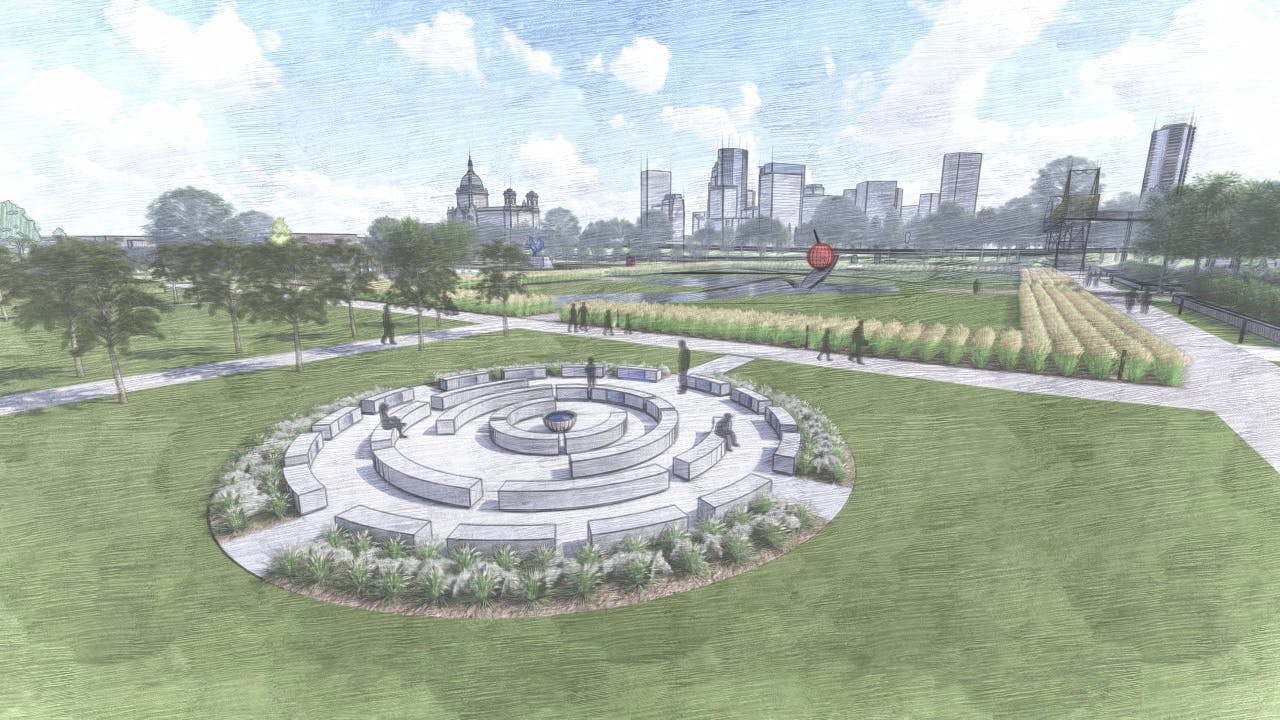 … for the Minneapolis Sculpture Garden, to be Unveiled!

The Walker Art Center announces the newest addition to the Minneapolis Sculpture Garden, Twin Cities-based artist Angela Two Stars’ sculpture Okciyapi (Help Each Other), which will be unveiled on Saturday, October 9, 2021. In January 2019, the Walker announced the selection of Two Stars as the finalist for the Indigenous Public Art Commission, a special project inviting an artist to create a piece of public art for the Walker’s collection to be sited in the Garden. This is the first work by Two Stars to enter the Walker’s world-renowned collection of contemporary art. The proposal by Two Stars (Dakota, Sisseton Wahpeton Oyate, b. 1982) was selected by an Indigenous Public Art Selection Committee and Walker Art Center curatorial staff from a pool of more than 50 national and international submissions.

Okciyapi (Help Each Other) is simultaneously a sculptural form, a gathering space, and a participatory work that provides a site for visitors to engage with Dakota language. The sculpture’s ringed configuration of seating elements made from custom-cast concrete makes reference to a rippling drop of water. Inspired by the legacy of her grandfather, Orsen Bernard, and all those working in Dakota language revitalization, the ripple effect represents Dakota language knowledge spreading across generations of speakers. The water vessel in the center serves as a reminder that the name Minnesota is derived from the Dakota phrase; Mni Sota Makoce, the land where the water reflects the clouds. The work incorporates audio, text, and medicinal plants native to the state, which represent a healing reconnection with Dakota language and culture. Navigation of the space represents the artist’s language journey and offers an invitation for the audience to join. Two Stars has conceived of the work in seven sections, representing the Oceti Sakowin, meaning People of Seven Council Fires, known also as the Great Sioux Nation. This group, which includes speakers of the Dakota, Nakota, and Lakota dialects, is made up of the Wahpekute, Wahpetunwan, Sisistunwan, Bdwakantunwan, Ihanktunwan, Ihanktunwanna, and Titunwan. Members of the Oceti Sakowin nations live primarily in areas now known as Minnesota, Montana, Nebraska, North and South Dakota, as well as in Saskatchewan and Manitoba in Canada.

In her new work for the Sculpture Garden, Two Stars integrates Dakota words and phrases, which appear on the exterior and interior sides of the sculpture’s concentric seating areas. As they experience the piece, visitors can also listen to audio stories told by fluent Dakota speakers by accessing recordings via their handheld devices. Over the past two years, Two Stars developed the work’s language components in close collaboration with Dakota language speakers and teachers, well as other community consultants. As she has remarked, “Language revitalization is a healing medicine for Dakota people. Our identity is grounded in our language. Our ceremonies, songs, and stories are rooted in language. Without our language, we would lose an integral part of who we are as Dakota people.”

Okciyapi (Help Each Other) will be situated in the northwest area of the Minneapolis Sculpture Garden. Two Stars further remarked, “I specifically chose this site with the awareness that there was a need for healing, for both the community and the land itself. As part of the installation process, my family led a ground cleansing ceremony at the site, to help all of us to move forward in positivity and celebration.”

Walker executive director Mary Ceruti, who worked closely with the Walker curatorial team and Indigenous Public Art Selection Committee in the selection of Two Stars’ proposal, notes: “Okciyapi (Help Each Other) makes poetic connections between land, water, and language and creates a welcoming site of reflection. We are excited to bring this beautiful new work to the Minneapolis Sculpture Garden, and are grateful for the way that Angela has embraced the process and community in developing her installation. The work adds an important Indigenous voice to the diverse group of artists from around the globe whose work is presented there. It is a place Twin Cities residents have come to find inspiration, contemplation and connection and will continue to visit for years to come.”

ABOUT THE ARTIST
Angela Two Stars, a member of the Sisseton Wahpeton Oyate, is a visual artist, arts administrator, educator, and curator. She received her BFA from Kendall College of Art and Design in Grand Rapids, MI, in 2017. Her work has been exhibited at the Sioux Art Museum in Rapid City, SD; the Watermark Art Center in Bemidji; and All My Relations Arts in Minneapolis, among other gallery and nonprofit spaces. Most recently, her work in the public realm has been visible in the region along the shores of Bde Maka Ska, part of Minneapolis’ Chain of Lakes, with a piece on which she collaborated with artists Sandy Spieler and Mona Smith, dedicated in June 2019.

Originally scheduled for an October 2020 unveiling, but postponed due to Covid-19, Two Stars’ project will now be completed in October 2021, after which the commission will enter the Walker’s permanent collection. Her project will join other works by Indigenous artists in the Walker’s collection, including pieces by Frank Big Bear, Julie Buffalohead, Andrea Carlson, Jim Denomie, Hock E Aye Vi Edgar Heap of Birds, George Morrison, the collective Postcommodity, Dyani White Hawk, Jaune Quick-to-See Smith, and others.