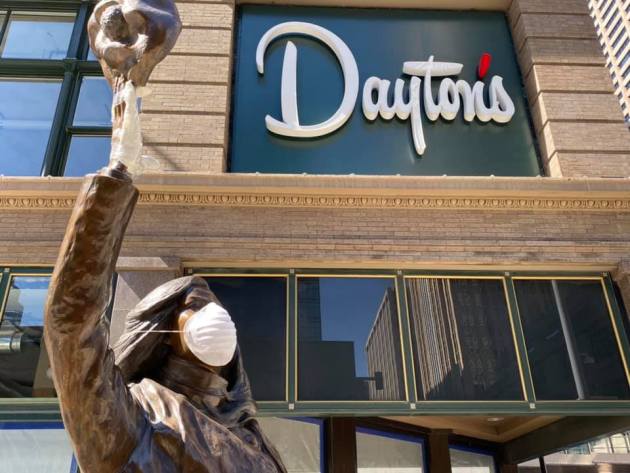 …but keeps the face mask and gloves!

While he was working in Minneapolis on March 31, 2020, Mark Fawcett decided to have a bit of fun and put a mask (a used one, not suitable to donate) on the statue of Mary Tyler Moore, located at the corner of Nicollet Mall and 7th Street. (Courtesy of Mark Fawcett)

As an essential worker, Mark Fawcett was out making tech support house calls on Tuesday when he thought about someone else who might need a little support.

Not someone exactly —  instead, an icon set in bronze, a symbol of Minnesota Nice who stands at the corner of Nicollet Mall and 7th Street in downtown Minneapolis: The statue of the late actor Mary Tyler Moore, immortalized as she tosses her hat joyfully in the air, just as she did while playing fictional WJM-TV producer Mary Richards of Minneapolis in the opening montage of “The Mary Tyler Moore Show,” that hit television show from the 1970s.

“Earlier in the day,” said Fawcett, “I thought, ‘I wonder if anyone has put any protective gear on Mary Richards.’ So I decided to swing by and see.”

As the St. Paul man behind Mac Men — a small business that is considered essential, Fawcett is trying to stay safe during house call stops to help people keep their Apple equipment running. This includes keeping his distance, wearing gloves, washing his hands and using his old, repurposed woodworking masks as face masks during the COVID-19 crisis.

“I had been using this mask and these gloves for quite awhile and it was time to dispose of them,” Fawcett said. “I thought it would be fun instead to use them to take care of Mary for the city of Minneapolis.”

(Just to emphasize: Neither the used, non-medical mask nor the worn gloves were suitable to donate to health care workers.)

“I saw people stopping to take pictures,” he said. “I heard some chuckles.”

That was his mission, really: “My point for doing this was to bring a smile to people’s faces,” Fawcett says, “or to give people something to chuckle about during this tough time.”

Perhaps Mary’s mask — if she’s still wearing it — can also serve as a public service announcement of sorts: The Centers for Disease Control and Prevention is reportedly now considering whether to advise all Americans to wear homemade face masks in public, according to National Public Radio.

With the help of her mask, Fawcett says, with a nod to her theme song: “She’s going to make it after all,” he says.

The Mary Tyler Moore statue was sporting a mask and rubber glove this morning, an attempt at levity in the face of the coronavirus pandemic. The mask and glove weren't wasted — neither were suitable to donate to health care workers, according to the @pioneerpress. 📸: @davidjoles, @startribune