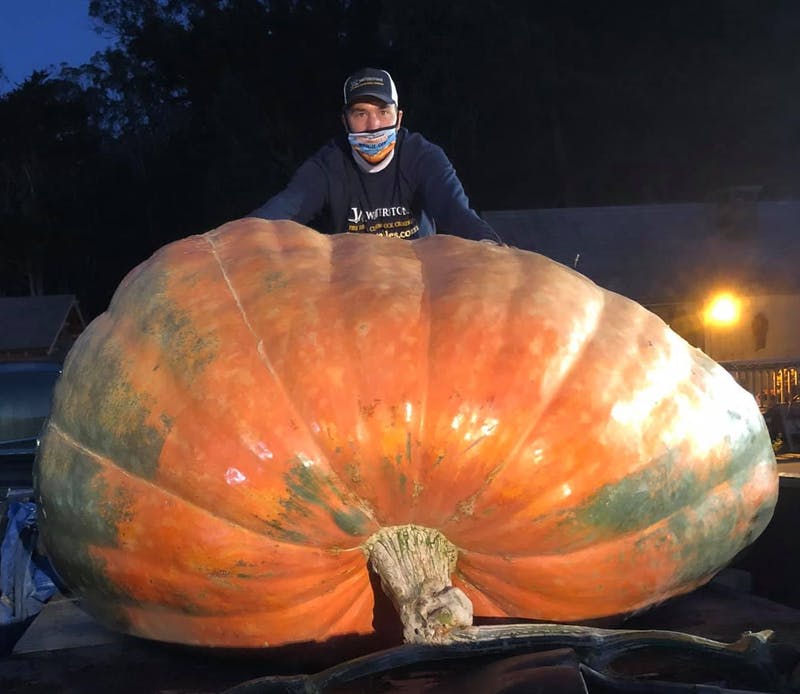 The journey was paved with potential hazards, but a Minnesota man emerged victorious from Monday’s Safeway World Championship Pumpkin Weigh-Off.

Anoka resident Travis Gienger drove 35 hours to Half Moon Bay, California, where his beastly 2,350-pound pumpkin bested all other gourds competing in the 47th annual event. He’ll take home a $16,450 prize and, in our opinion, canonical state hero status. “We didn’t pre-weigh this one, so we just really don’t know until we throw it on the scale,” Gienger told Mallermedia ahead of the event, which was spectator-free and live-streamed due to COVID-19.

His entry — nicknamed Tiger King, after the hit Netflix show — wound up tipping the scale by 176 more pounds than the second-place finisher. The Guinness World Record for Heaviest Pumpkin was set by Belgian man Mathias Willemijns in 2016: 2,624.6 pounds! Had Gienger broken that record, the payoff would have been an even $30,000 instead of the $7 per pound model. Gienger endured a nerve-racking drive to the World Championship Pumpkin Weigh-Off. The veteran pumpkin farmer treated his eventual winner like a baby orca.

“We went to the extreme,” Gienger told local CBS affiliate KPIX 5. “We wrapped it in wet blankets, tarp over that, air tarp over that. We actually put it in dirt, then buckets of water. Every gas station we stopped, we watered it down.”

For some valuable perspective, the always reliable tonnage wonks at WeightOfStuff.com tell us the Liberty Bell, saltwater crocodiles, and the 1979 Volkswagen Beetle all weigh roughly 2,000 pounds, and therefore come in lighter than Gienger’s monster pumpkin.

We reached out to Gienger for additional enormous pumpkin deets, but did not immediately hear back. So just enjoy this triumphant photo:

by Jay Boller in Food & Drink