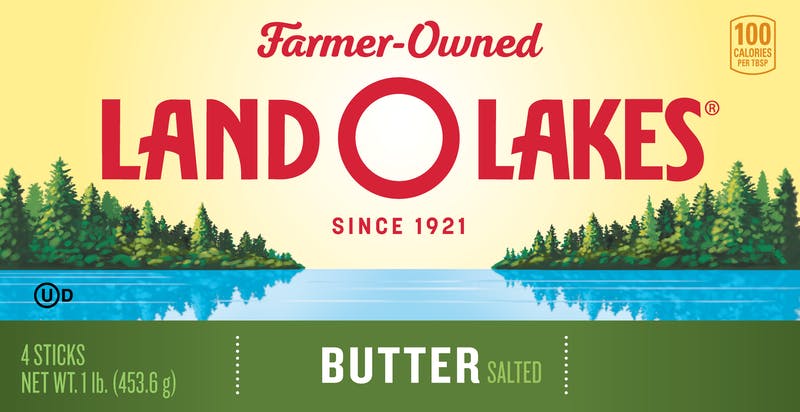 We wouldn’t blame you if you didn’t notice anything different about Land O’Lakes.

It still tastes the same. It still comes in that rectangular four-pack, decorated with the crystal-blue lake and that butter-yellow sky you’re used to.

But something’s missing: “Mia,” Land O’Lakes’ braided, buckskin-wearing “Butter Maiden” mascot, depicted sitting and proffering dairy products for nearly a century. It’s as if one day she just stood up and walked away.

This “butter with olive oil” package from 2009 includes the company’s mascot, Mia.Land O’Lakes

Mia had appeared on the Arden Hills-based co-op’s packaging since 1928, when she was first dreamed up by a St. Paul advertising firm. In the 1950s, she got a redesign by Patrick DesJarlait, the same prolific Ojibwe artist from Red Lake who designed the Hamm’s Brewery bear.

In February, the Fortune 500 company announced the package redesign, highlighting its farmer-owned history with photos of actual Land O’Lakes farmers. It failed to mention where Mia had gone. Minnesota Reformer, which noticed the change earlier this week, also points out she’s been scrubbed from the company’s website.

When City Pages reached out for comment, Land O’Lakes declined to respond to questions about Mia, outside of a link to the company’s February press release and to an article about the farmer-centric rebranding in Fortune.

Mia didn’t exist in a vacuum. Americana is saturated in portrayals of Native people, usually by corporations in an attempt to sell things to white people. Depending on how each image was deployed, they came to be industrial symbols of integrity, or oneness with nature, or at their skeeviest, sexual purity.

As Adrienne Keene, a professor at Brown University and the creator of the popular Native Appropriations Blog, told the Reformer, this is a “great move” for a lot of Native folks who have been forced to watch companies use cartoonish visions of their culture to sell butter, cigarettes, and motorcycles.

Meanwhile, Minnesota Lt. Gov. Peggy Flanagan, who is a citizen of the White Earth Nation of Ojibwe, praised the decision on Wednesday.

“Native people are not mascots or logos,” she tweeted. “We are very much still here.”

Thank you to Land O’Lakes for making this important and needed change. Native people are not mascots or logos. We are very much still here. https://minnesotareformer.com/2020/04/15/land-olakes-quietly-gets-rid-of-iconic-indian-maiden/ …

For nearly a century, the Land O’Lakes Indian maiden has kneeled by the side of a blue lake holding out an offering of a 4-stick box of butter. No more. The Minnesota-based farmer cooperative…

In its press release, a vice president for Land O’Lakes cited “research” showing consumers “care about farmers,” which is why the the company is “extending that farmer-owned story to our packaging… arguably our most direct vehicle to communicate with consumers.”

That explains what Land O’Lakes is changing to, but without acknowledging what it’s changing from—arguably one of the more recognizable labels in the grocery store. To Keene, it’s a missed opportunity.

“It could have been a very strong and positive message to have publicly said, ‘We realized after a hundred years that our image was harmful and so we decided to remove it,” Keene said. “In our current cultural moment, that’s something people would really respond to.”

by Hannah Jones in Food & Drink