In Minneapolis, a Thriving Center for Indigenous Art 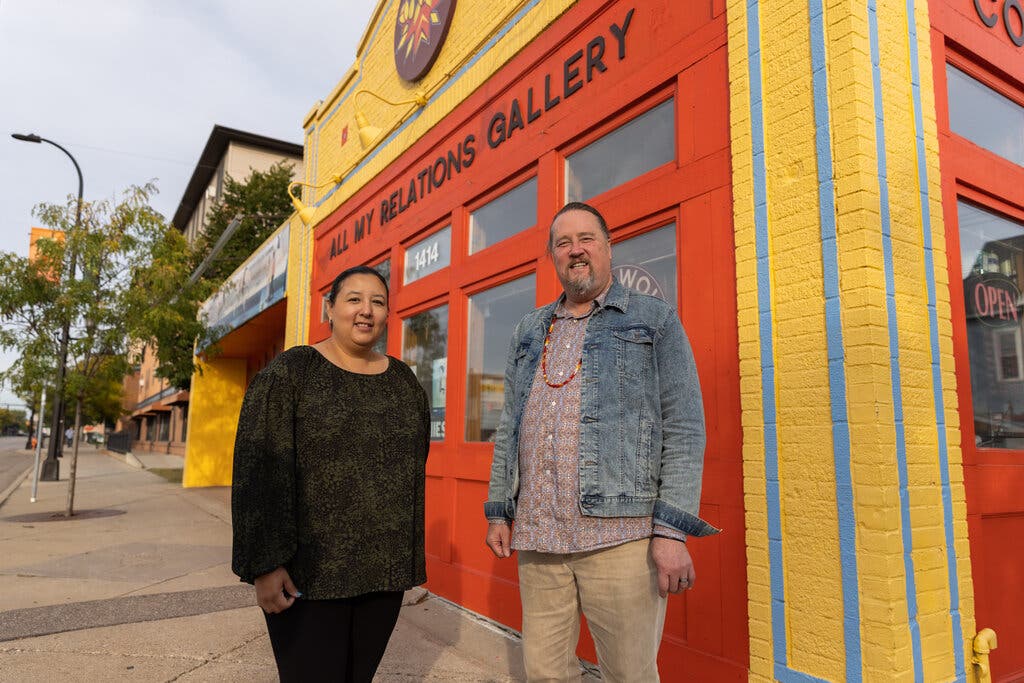 New York TImes: On a yellow brick building in Minneapolis, a mural of a woman with two braids that cascade into waterfalls and lips muzzled by a red handprint watches over Franklin Avenue.

Above the handprint — a symbol of solidarity for missing and murdered Indigenous women — the figure’s sunglasses reflect a cityscape and tepee.

“It was a revolutionary document,” said Robert Lilligren, the president of the Native American Community Development Institute. Its goal? “To create an economic engine for the Native community.”

At the corridor’s heart is the yellow brick building, which houses the institute, as well as its community assets: the Four Sisters Farmers Market, Pow Wow Grounds coffeehouse and All My Relations Arts, an organization and exhibition gallery dedicated to increasing the visibility of contemporary Native artists, cultivating Native curators and connecting them to the influence of preceding generations.

This year, All My Relations Arts celebrates 10 years in this location, and about two decades of operation. It has become a point of pride, said Angela Two Stars, the organization’s director.

“A lot of the artwork that we display is from a native perspective, and that’s a different narrative than what we’ve been taught, you know, as American history,” Ms. Two Stars said.

Mr. Lilligren said the gallery “immediately became a center of attention, both in the community and the broader arts world.”

All My Relations is a direct outcome of the blueprint, which outlined the corridor as a destination for Native American art, culture and food, citing examples such as New York’s Little Italy and San Francisco’s Chinatown.

Marked by orange lamppost banners, turtle imprints on sidewalks, and a number of murals, the eight-block corridor is bookended by the Ancient Traders Market and the Little Earth affordable housing complex, which became famous as a home base for the American Indian Movement. Formed in the aftermath of the 1956 Indian Relocation Act, the movement went on to organize the 1972 Trail of Broken Treaties, a protest walk from the West Coast to Washington, D.C., to demand that the Nixon Administration honor its treaty commitments.

The Relocation Act forced many Native Americans to assimilate into urban areas, like Los Angeles, Chicago and Minneapolis, which has one of the largest concentrations of urban Native Americans in the nation.

“The American Indian Movement was founded here in 1968. I mean, literally here, you know, in the footprint of the American Indian Cultural Corridor,” said Mr. Lilligren, who served as the first Native American member of the Minneapolis City Council from 2001 to 2014.

He explained that the Minneapolis corridor is unlike others nationwide because of these organic roots, and because Native Americans own a majority of the property along Franklin Avenue, including the All My Relations Arts space.

The gallery itself has become a pipeline for cultivating talent. For example, Dyani White Hawk, a former All My Relations director and curator, has many works in the collection of the Smithsonian National Museum of the American Indian.

Jonathan Thunder, a painter, illustrator, and filmmaker, is the project mentor for the All My Relations initiative, “We Are Still Here,” which supports artists in making large-scale public artworks.

Ms. Two Stars is herself a high-profile artist whose installation “Okciyapi” was unveiled Oct. 9 at the Walker Art Center’s Minneapolis Sculpture Garden, placed next to “Spoonbridge and Cherry” by Claes Oldenburg and Coosje van Bruggen.

“I call myself a fan girl of Native artists,” said Ms. Two Stars, who years ago participated in her first juried show at the gallery, where she met Ms. White Hawk, now her mentor. In 2018, she was invited back to curate a show about missing and murdered Indigenous women, “Bring Her Home,” now a recurring event.

“My grandmother was kidnapped and murdered when I was 9, so I used that to shape the exhibition,” Ms. Two Stars said. She shares this with participating artists to say: “I get it. You’re safe here.”

Juleana Enright first came to the gallery as a 2020-21 fellow of the Emerging Curators Institute, a Minneapolis program for arts professionals from diverse backgrounds. Mx. Enright, who is nonbinary, wanted a space for the show they were developing on Indigenous futurisms — inspired by Grace Dillon’s Native sci-fi anthology — and found All My Relations to be the right fit. Mx. Enright was hired as the gallery assistant in April and their showBiskaabiiyang (an Anishinaabe term meaning, “a return to ourselves”) is on view through Dec. 11. 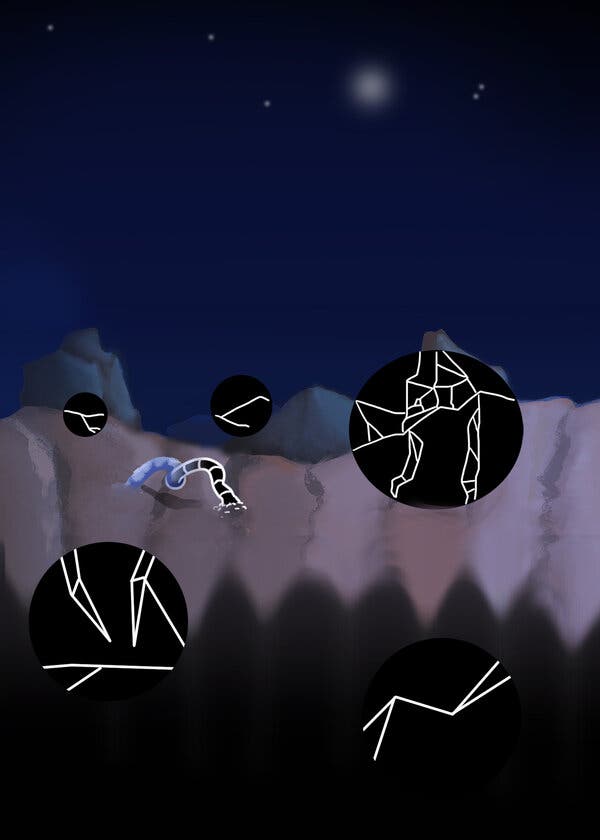 “I just like that this gallery specifically was reinterpreting what it means to be a contemporary native artist and really highlighting people that you should know” Mx. Enright said.

All My Relations Arts initiatives extend outside the exhibition space, with community murals along the corridor like the woman with braids, created by Natchez Beaulieu and local youth in partnership with the Minneapolis Institute of Arts and its 2019 exhibition “Hearts of Our People: Native Women Artists.”

The presence extends beyond the corridor as well. The ongoing “We Are Still Here” initiative, in partnership with the Hennepin Theatre Trust and Clear Channel Outdoor, tasked artists with designing art for digital billboards throughout the metro area.

Ms. Two Stars says a favorite display is by Sheldon Starr, who paired an image of the Lincoln Memorial with text that says “Mass Execution U.S. Champ. Undefeated 1862-Current.” The piece refers to President Lincoln’s order to hang 38 Dakota men in Mankato, Minn., in 1862. It remains the largest mass execution in U.S. history.

“It’s a truth-telling initiative,” Ms. Two Stars said. “It’s really typical to a Native American kind of personality where they use humor to address some of these hard parts of our history.” 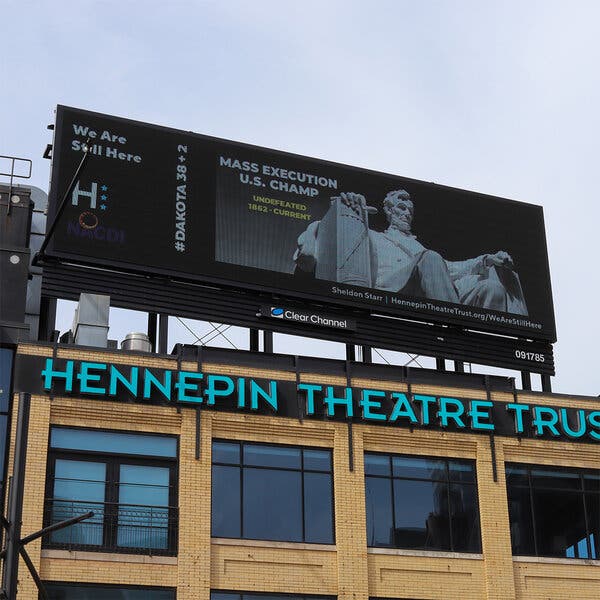 In late October, an All My Relations Arts project in partnership with the Minnesota Department of Transportation led by Courtney Cochran will be installed at the site of a former Native American homeless encampment. Twenty-three painted plastic panels — stitched with resin beads and ribbon prayer “zip ties” to a chain-link fence — will read “Never Homeless before 1492.”

Ms.Two Stars and Mr. Lilligren said the community was embarking on refreshing the blueprint.

This article is part of our latest Fine Arts & Exhibits special report, about how art institutions are helping audiences discover new options for the future.