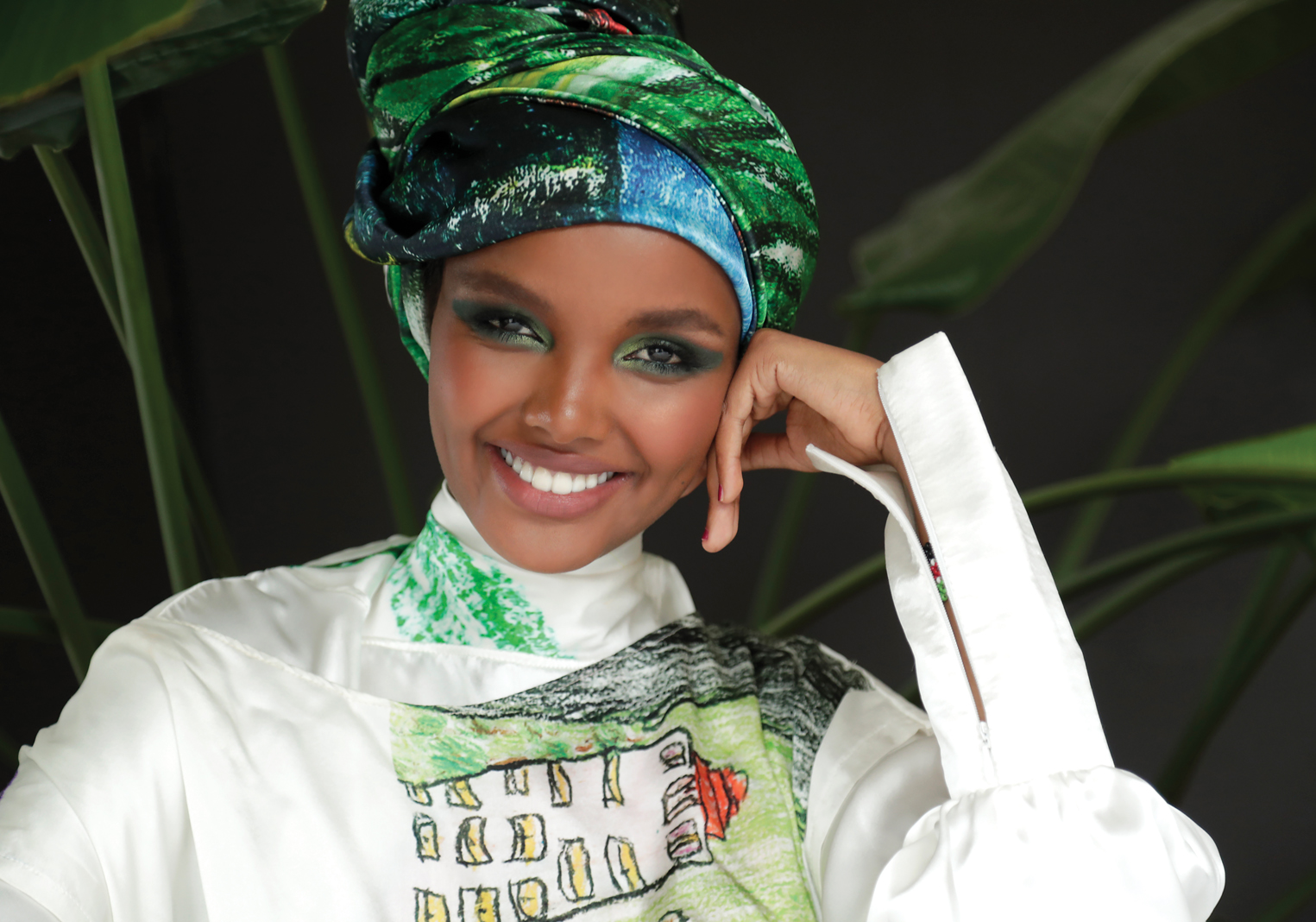 Sports Illustrated did something unprecedented last spring, although it was Halima Aden who really made history: At 21, the Somali American fashion model appeared in the magazine’s swimsuit issue dressed wrists-to-ankles in a burkini—beaming, lounging on a beach in Kenya, the country where she spent much of her childhood in a refugee camp before moving to St. Cloud, Minnesota, in the early aughts. Among Aden’s other firsts: first woman to wear a hijab in the Miss Minnesota USA pageant, first to sport one on the covers of Allure, British Vogue, and Teen Vogue, among other women’s magazines. In 2018, the proud Minnesotan took on her most cherished role yet, as an ambassador for the United Nations Children’s Fund (UNICEF). We sat down with Aden to catch up.

What was your childhood at Kakuma Refugee Camp in Kenya like?

I remember the happy moments. I had a normal childhood, I had a happy childhood. Despite it being a refugee camp, and despite the environment, I still was thriving. I think when a child doesn’t know any better, you don’t know that you’re missing out on anything. So, for me, I remember the strong sense of community, people coming together and helping each other out. I remember so many nights where all the neighbors, all the refugees, would come together to dance and sing. I had so many friends. We all spoke different languages, but Swahili was our common ground. I just felt like every day was something new, and the opportunities were endless, in a way.

At the refugee camp, what can you remember about your first UNICEF interactions?

It was a UNHCR [United Nations High Commissioner for Refugees] camp, and I remember people coming back to the camp and playing with us, a lot of visitors. It was definitely a UNICEF-sponsored camp, but UNHCR also did a lot on the ground. Early on, I remember seeing the UNICEF shirts, the staff wearing the shirts, the school that they built in the camp, all the programs that they tried to do for the kids.

In your work as a UNICEF ambassador, what do you hope to achieve?

I’ve always said my family won the million-dollar lottery by escaping the camp and coming to America, and I’ve had the chance to go to school and get an education, and now, with modeling, I have this new platform that I can use to share the stories of refugees and bring attention to the work that UNICEF is doing on the ground. My advocacy is 100% necessary in that space. I know what it’s like to be a child refugee. So many of the challenges the kids are going through I can personally relate to, and I think my story gives them so much hope and inspiration for the future.

Last year, you returned to the refugee camp where you grew up. What are your memories from the trip?

That trip was eye-opening, because it was the first time that I got to go back home. With that was a whirlwind of emotion. On the one hand, I’m going home to the place where I grew up and spent the first seven years of my life. On the other hand, I was doing the first-ever TED Talk that was taking place in a refugee camp, and that was exciting and nerve-wracking. Overall, I would say that experience of returning home as an adult was one of the most moving, impactful trips I’ve ever taken. For me, what made it even more exciting was the fact that my mom was so proud that modeling essentially brought me back to the place where she raised me, back home.

You recently visited with refugee kids in Italy, at the UNICEF center based there. What did you take away from your trip?

We stopped by Palermo, and I got to see the center where migrant adolescents were housed after they entered Italy. Then I got to meet the girls. That was really fun, because those girls could have been in Minnesota. They’re girls, they’re young, and giggling, and kind of nervous at times. Towards the end, the girls were dancing, they were singing. One girl sang me a song, and she really wanted Rihanna to one day hear it. It was really nice that, despite her journey, she’s still a girl listening to Rihanna, and she just wants to sing. It reminded me so much of when I was a kid. The first song I ever memorized was “Dilemma,” by Nelly and Kelly Rowland. In a way, it was this normalcy despite the circumstances.

The second day was with the boys. I would say the big difference between the girls and the boys was that the girls clearly had to overcome so much. One girl had to walk five days through the desert, and I don’t want to go too much into her case, but the things that she has overcome… she’s absolutely resilient. They are things that no young woman should have to face. You would never be able to tell that that girl had gone through so much at such a young age to get to where she is today. To see that they were all so driven, that they were focused not just on their stay in Italy but on life outside Italy—one girl wanted to be a lawyer, one girl wanted to be a teacher. The boys, from what we understood—their journey was different. They were brought to Italy for financial opportunity, to grow and find a job, while the girls—some of them were trafficked.

I think sometimes the world forgets that even though Italy is a developed country, the refugee crisis is still relevant in Italy, because that’s a place where a lot of refugees migrate to. It’s not the final destination, but it’s a place that still needs a UNICEF center to protect the kids.

What do you wish people would understand about the refugee experience?

Refugees, no matter where they are in the world—they’re no different than anybody else. At the end of the day, it comes down to simple humanity. We all want the same things: obviously, the chance to have children be educated, the opportunity for safe living, access to food and clean drinking water. Those are basic human necessities, and I think refugees should be treated with dignity and respect just like any other human. At the end of the day, we all want the same things that anybody else in this world wants, and that’s to see our families happy, the children thriving, and making sure that they have access to the things they need to grow and succeed.

What are the proudest moments of your career as a model?

Being named a UNICEF ambassador will probably always be my No. 1 career highlight. There is no greater title for me to ever have in my life, with my background and where I came from. That is the most meaningful. I’m so honored and so grateful to be a part of such an amazing organization.

How has your family responded to your success?

My mom is so proud. It’s funny, because she doesn’t understand fashion, she doesn’t get “editorial,” or anything that I do for work, but she does understand my role as a UNICEF ambassador. Whenever I tell her, “I’m taking a UNICEF trip,” she’s like, “Oh, good, stay there longer!” It’s so nice to see how excited she is, because that is our common ground. My mom, fashion is not the world she comes from, but UNICEF, that work she understands. She remembers what they did for our family on the ground.

How much of your life is spent in Minnesota now? What do you like to do when you’re here?

Every article that I ever do, every interview, every shoot, whether I’m in an Uber headed to the airport or a business meeting—Minnesota, and how amazing the people and the state are, always comes up. No matter what. I know my Minnesota facts. People are always like, “Are you being paid by the tourism department?”

I love that we have all four seasons, and we have beautiful white Christmases where the snow glistens and makes me feel like I just want to sleep all day—it’s a mood. And I love that summer is very relaxing, and, no matter what, I can go have a good time by the lake and walk around. I love the fact that the community is so, so strong. It reminds me so much of the community from Kakuma.

You built your hijab into your modeling contract. Why is it important for you to continue wearing it?

Don’t change yourself, change the game. I think it’s important that you remain authentic to yourself, and that everybody feels like they don’t have to conform in order to fit in, that it’s OK to be who you are and wear it proudly, do you know what I mean? For me, my hijab is a big part of my identity, and it’s important that I never lose that.

Minnesota congresswoman Ilhan Omar is also increasing representation for Muslim women. How did it feel to see her get elected?

Every little girl should see somebody that she can relate to, somebody that she can look up to. That was not just a big win for us as the Somali community in Minnesota, to see Ilhan go on to become a congresswoman. I think it was a big win for Minnesota, because it just shows that we’re a state that allows people—no matter what culture or background they come from—the access to grow and to represent our state. For me it was a proud Minnesota moment. Not just a Somali moment, but a proud Minnesota moment. She became the first-ever Muslim, hijab-wearing woman in Congress, and that’s a huge deal. I think the fact that she’s a woman—our state holds great pride in that. Now, if Ilhan was from Iowa, that’d be a different case. [laughs]

What do you want to use your platform to say?

My message for young women specifically would always be “Don’t change yourself, change the game.” Know that it’s OK to be confident, it’s OK not to conform. We’re beautiful the way we are, and we don’t have to change. I also want to continue to use my voice and my platform to speak about the work that UNICEF is doing. And to always champion Minnesota, too.