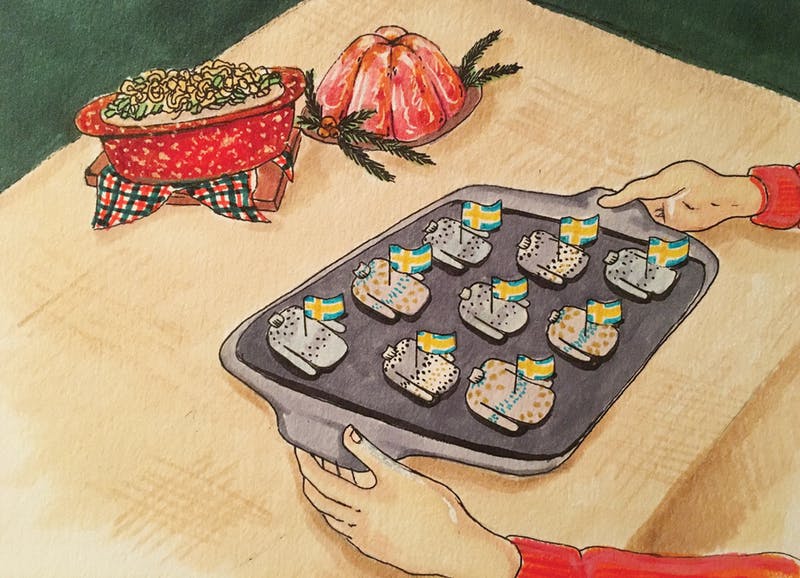 It’s a great tradition, sure, but it’s far from vegan. I was born and raised in Minnesota by parents who went to St. Olaf. I have Swedish blood, was confirmed in the Lutheran church, yet somehow I didn’t try lutefisk until college. When I finally tasted it, I really enjoyed it. About two years later, I became vegan, and I was met with a void in my holiday diet.

Ever since, I’ve wanted to try a vegan version of lutefisk. With zero confidence in my kitchen skills, I have no plans to make a fish-free rendition for myself. So I turned to the Herbivorous Butcher to see what they had to say about attempting a plant-based version of the Nordic delicacy. Collin Sandoe, kitchen manager at the vegan butcher shop, is a believer in swapping traditional meat dishes out for vegan imitations. “I like doing more traditional things, and I think lutefisk would be an interesting one,” he says.

Making it, he says, helps preserve what made that food special in the first place. “There’s so much tradition that gives it its soul,” he says. “Just coming up with a whole new dish, I think you’d be doing a disservice to all these thousands and tens of thousands of years of culinary tradition.” Their store in northeast Minneapolis has had success selling vegan turkeys for Thanksgiving. Turkey, Sandoe points out, is “not a trendy thing, it’s not a health thing, it’s not a cutting-edge meal. But it’s the cornerstone of a holiday, so people rely on it.” That also describes lutefisk, but for a smaller portion of the population.

At the Herbivorous Butcher, they’ve experimented with faux fish in the past, including making some smoked herring, but lutefisk would be a whole different challenge. Because the dish doesn’t have a traditional fish texture, Sandoe thinks they would have to try something new.

“A texture like that,” he says of the gelatinous nature of lutefisk, “I think, is found in other things that are vegan.” He suggested something like agar, a seaweed-derived thickener, as the base ingredient, possibly mixed with the wheat gluten they use in a lot of their meats. It doesn’t look like vegan lutefisk will be arriving in stores soon, but it’s not too crazy to imagine it could next year.

The question of could is one thing. Should is another. This led directly to my proudly Swedish grandparents and great uncle. Because my parents have zero affection for lutefisk, it was my maternal grandparents who gave me my first taste of the jellied fish. These same grandparents go to a lutefisk supper every year. At first, I thought the unique preparation of lutefisk was what kept people interested. But according to them, it’s hardly about the lutefisk.

“A lot of people,” my grandma acknowledges, “go to lutefisk dinners just because they like to be with all the Swedes wearing their Scandinavian sweaters.” Many of those people, she says, “will eat the meatballs and the vegetables and all the stuff that goes with it, but they don’t actually eat the lutefisk.”

My grandparents aren’t in that camp, but it seems they aren’t that far removed. “I think the smell is worse than the taste,” my grandma says of the delicacy. “And the feel isn’t the greatest,” added my grandpa. Though my grandpa has been around lutefisk his whole life, he admits, “I didn’t eat it until about oh, six, seven years ago, then I really liked it.” But that may be his limit. “This year I’m having trouble. I’m afraid I’m losing my taste for it.”

For his part, my great uncle was much more staunch in his dislike. When my grandma suggested we have lutefisk on Christmas Eve, he couldn’t even stand to hear the whole question before disagreeing. It seems you could remove the lutefisk—or swap it out for something else—and as long as the sweaters, music, and Scandinavian spirit remain, most of the community would show up. This bodes well for vegan lutefisk finding a place on the menu one day.

When I asked Sandoe his thoughts on why lutefisk has stuck around, he echoed this sentiment. “It’s hard to disentangle tradition from the flavor or the nutritional aspect or the appearance or the texture. I think those are all reasons that people eat foods, but it might just be tradition that’s keeping lutefisk in the, I guess, not-quite-popular lexicon.”

The tradition, though, may not last much longer. “When you go to these lutefisk dinners you don’t see very many young people,” my grandma says. “When you do see one, it’s a surprise,” echoes my grandpa.

It’s possible young people who aren’t going to these suppers could attend when they get older, but what if the negative images conjured by lutefisk lead our generation to sacrifice tradition for taste like our parents’ generation has? Or what if so much of this generation is vegan or vegetarian that they don’t want to pay to wait in line to not even eat the entrée? Might vegan lutefisk be the answer?

To further consider these possibilities, I enlisted help from St. Paul native and fellow vegan Kaia Wahmanholm. Wahmanholm, who’s embraced her Norwegian roots far more than I’ve embraced my Swedish ones, says she “would definitely try vegan lutefisk.” “I have been to a couple of church basement-type events this season,” Wahmanholm says, “and while they are mostly attended by members of the older generations, what you really need to grab the millennial generation’s attention is to create a millennial base, so why not start with vegans?”

But vegan lutefisk alone may not be enough to draw new faces into the fold. As Wahmanholm points out: “Lutefisk is simply a way of eating butter under the guise of enjoying a food that has foul repute. While I did enjoy lutefisk before I went vegan, I can’t help but think what I really enjoyed was just butter.” Instead, she says, “Maybe vegan meatballs would be easier and less… well… lutefisky.”

Or maybe the meat-averse could be brought into the fold by even further embracing tradition. “My father used to tell us,” my grandpa recounts, “that they would take a codfish, nail it to a board, put it in a barrel of lye, take it out, scrape the cod off, and eat the board.”

by Charlie Gillmer in Food & Drink