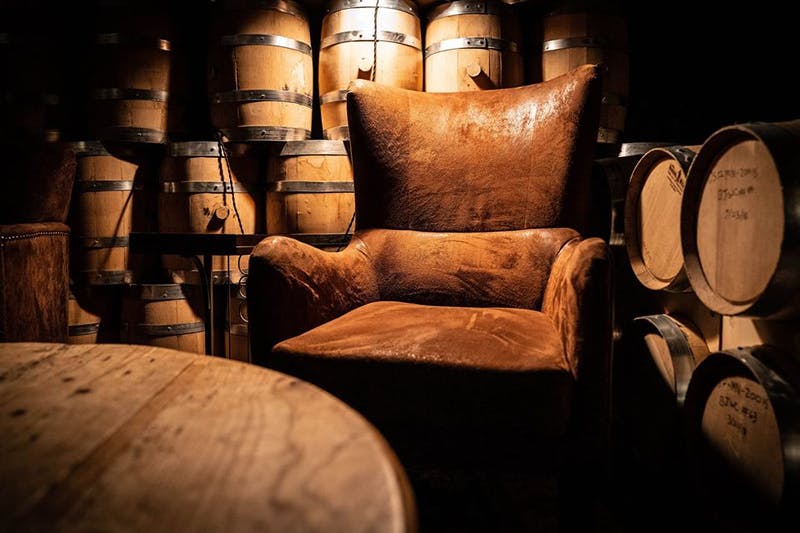 Brother Justus’s new place is seven times the size of its current one, and has actual windows.

Those panes overlook Columbia Park and Golf Course in northeast Minneapolis, and contain a distillery that measures nearly 14,000 square feet, and ups Brother Justus’s production capacity to nearly 40,000 proof gallons of whiskey per year – all marked shifts toward the present moment for a company who bears a made-up monk as its moniker.

“It is more important than ever that we contribute to positive change for our community, and invest in our values of justice, opportunity, and stewardship,” said Steger in a statement that cites the role COVID-19 and the death of George Floyd have played in changing the world. “The historical Brother Justus created opportunities for people facing tough times. And he held himself to the highest standards of craft and care for the well-being of others. We can’t do less.”

Phil Steger, founder and CEO of Brother Justus, in front of the distillery’s new home.

Architect and interior designer Aaron Wittkamper of Wittkamper Studio will play an integral role in transitioning Brother Justus’s lofty talk into a pragmatic, concrete embodiment of these values and choices.

Brother Justus’s new distillery will be open to the public, featuring a cocktail room proactively designed for social distancing, and that integrates full accessibility for individuals who live with mobility- and sight-related disabilities into the distillery aesthetics and experience. Additionally, the Benedictine monk-inspired spirit is proactively working to include people who face structural barriers to economic opportunity and employment in the jobs created by the new distillery.

“When we build places and businesses where each person is welcome, no matter who they are or how they get around, we create better experiences and richer environments for everyone,” underlined Steger.

But it’s not just new buildings the distillers are working on in the coming year: Brother Justus also has its sights set on releasing a new, cold-peated whiskey, to…