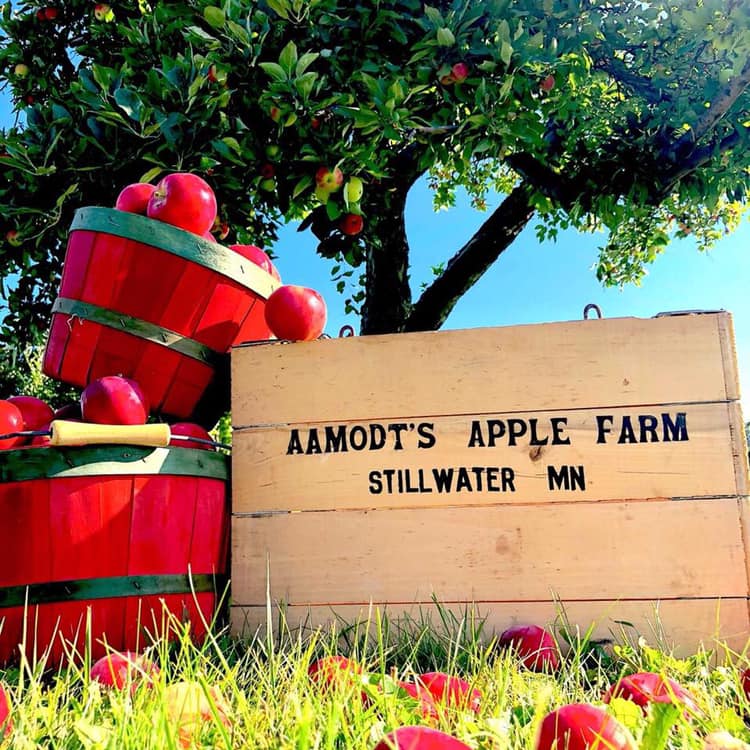 Aamodt’s Apple Farm is a favorite family destination for fresh Minnesota apples. Pick your own, or purchase your favorite apple varieties inside our barn.

History: Harry S. Truman was president. The average American family earned $2,950 a year. Gas cost 16 cents a gallon. Just a few years post-World War II, young families were filled with optimism and ambition. It was a great time to start something new. For Thor and Lucille Aamodt, the America Dream meant starting their own family-run apple orchard. They purchased a pretty piece of land near Stillwater, Minnesota, that seemed to have just the right soil and climate for growing crisp, juicy apples. And even then it was just a short, scenic drive from Minneapolis and St. Paul.

Thor and Lucille put everything they had into the apple farm. With some seedling apple trees, a well-thought-out plan for planting, help from young son Tom, and a lot of prayers, Aamodt’s Apple Farm was born.

A few decades down the road, Tom and his wife, JoAnn, expanded the farm to include over 6,000 apple trees covering more than 50 acres.

Today, the apple farm is run by the third and fourth generations of Aamodt apple growers.

Over sixty-five years and a lot of delicious apples later, the picturesque apple farm still has the appeal that inspired Thor and Lucille.

Reach up to pick an apple from a tree, and experience a little trip back to a simpler time. Explore the historic buildings on the farm. The 1880s barn and granary are now the heart and soul of our apple store, bakery and winery.

Most importantly, family still comes first at Aamodt’s Apple Farm. We remain true to the original idea that your trip to the apple orchard should be educational, fun, relaxing—and delicious!

A post shared by Stillwater MN Tourism Bureau (@discoverstillwater) on Sep 20, 2020 at 5:53am PDT