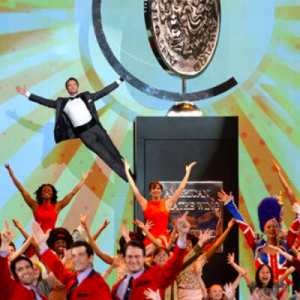 Welcome to Staff Picks: YouTube Edition! In this time of social distancing, we’re missing our time at the theater just like you, so we’ve turned to YouTube to revisit some of our favorite performances. Each week, we’ll be sharing a roundup of some of our top spiral starters so you can fall down as many belting YouTube holes as you please.

We also launched The Intermission Mission, where we’re highlighting exclusive performances on our social channels. Follow @TodayTix and tune in each night.

The song encapsulates the highs and lows of theater along with the herculean feat of performing live eight shows a week. The line “All of us up here we were that kid” makes me sob while the line about bouncing a quarter off Billy Porter makes me die. In that moment in 2013, I was watching on a livestream at god knows what hour in Spain sobbing along feeling at home though I was thousands of miles away

“Ain’t Too Proud” is my favorite musical of the 2019-2020 season, and this performance explains why! The energy of the cast, Ephraim Sykes’s slick moves, and that irresistible falsetto by Jeremy Pope bring me so much joy when I need it the most. My favorite part of the Tony Award performance is the final number when the whole cast, including the swings, join the orchestra to perform “I Can’t Get Next To You.” Sergio Trujillo’s choreography paired with this hit by The Temptations is guaranteed to bring me sunshine on a cloudy day!

I never got to see this show when it was on Broadway so I go back to the Tony Performance way too often. The lyrics and situation are hilarious, and the music is beautiful. Also, the intro is by an actor that plays multiple characters so getting to see him go through his costume/character changes is so fun! Watch from around 4:10 until 4:25 to see a great freak out and perfectly timed bag throw.

I was so excited to see this show, and TBH the first time i saw it i only liked it (second time i appreciated it way more). But I love this performance because these kids absolutely slay, and I feel like the way they put together the medley truly summarizes the messages of this show. I always get so proud of all of these little Broadway children and usually start to tear up during “Revolting.”

This performance was my first taste of “Sister Act: The Musical” and got me completely hooked. The energy! The belting! The dancing nuns! It’s one of those Tony performances that truly does justice to the theater magic brought by this show’s vivacious Act 1 finale. It’ll put a pep in your step, and if you like what you see, I’d highly recommend checking out the whole cast album for more joyful noises.

“The Life” remains one of my favorite musicals ever, and this Tony performance undoubtedly proves why. Viewers couldn’t possibly have been ready for these seven sultry, sassy, stomping sex workers as they powered through this anthem about being in one control of one’s body. The dance break – added into the number from another moment in the show – is the definitive highlight of the performance. Watch and fall in love with the ladies of (the dark side) of 42nd street.

I’m incapable of listening to ‘Anything Goes’ without hearing the taps in my head. Completely in-sync a capella tap moments. Cole Porter. Sutton Foster in a nautical pantsuit. The only cruise I’ve ever wanted to be on.

This rehearsal video is my all-time top played YouTube video. Watch this one before the Tony performance for some before/after magic. (No judgement should you decide to teach yourself the tap dance in your living room.)

Get your Patti fix. I watch this literally once a week.

One would be hard pressed to find a clearer, crisper belt than that of a young Sutton Foster in Thoroughly Modern Millie. This song is an anthem for anyone who has been burned by a significant other and shows how the trials of dating can unify women, even driving them to break out into a tap number. The audience at the 2002 Tony Awards loses their mind at this iconic dance break, and the show goes on to win 6 Tony Awards that night.

I love this performance! i have never seen the show, but am always blown away by Judy Kuhn’s gut-wrenching final note — plus the added story of her forgetting the lines and also doing a quick costume change from a “Les Mis” performance minutes earlier gives a whole other level on which to enjoy!

Just thinking about this revival brings a smile to my face, and you have the ultimate trifecta — Heather Headley, Danielle Brooks, and Cynthia Erivo — performing an uplifting and inspiring melody from the show at the Tonys. I dare you not to smile and cry at the same time.

Check out songs from our favorite Tony Awards performances on Spotify!
Want to jam along to some of our favorite show-stopping performances? Whether you’re cleaning your home or having a solo dance party, these tunes are a great pick-me-up. Check out the Spotify playlist below.

← City Pages: Everything in Minnesota is closed; time to get into nature. VIRTUAL TOUR: GLENSHEEN IN 360º - Duluth, MN →
more locations/events