Ski for Fire: Ty Olson on 254-mile Ski Trek Across the Top of Minnesota 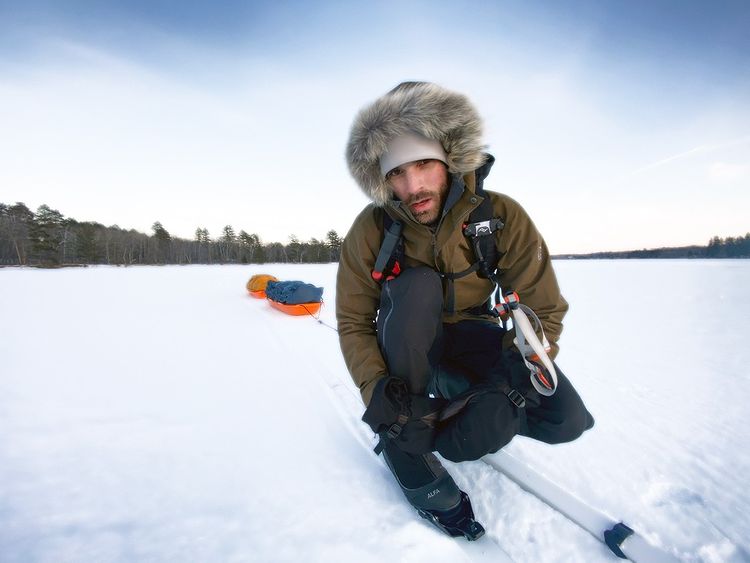 (Photo courtesy of Ty Olson)
–
Ty Olson trained for his ski trek across the top of Minnesota on Ten Mile Lake near Walker, where his family has a cabin. The Grafton, North Dakota, native is skiing 250 miles across the Minnesota-Ontario border, from Rainy Lake to Lake Superior, to raise money for a Lakota nonprofit.
–
Duluthnews: Ty Olson left the Rainy Lake Visitors Center at Voyageurs National Park on Thursday, starting a 254-mile ski trek across the top of Minnesota. It was 20 below zero at the time. He was alone. He won’t be indoors again for four weeks or more.

Olson expects to end up at Grand Portage, on Lake Superior, sometime in early March, having followed the Minnesota/Ontario border the entire route — retracing the path that Native people used for centuries and European voyageurs after that.

But they usually went that way in summer.

“I know it sounds pretty crazy. But I’m actually thinking it’s going to be fun,’’ Olson said last week while preparing for his ski trek.

He’ll spend time on the frozen surfaces of 35 lakes and nine rivers and cross land along 26 portages as he skis through Voyageurs and the Boundary Waters Canoe Area Wilderness.

Olson, 32, will be unsupported on the solo trip, meaning he’s taking all of his food, white gas fuel (for cooking and melting water, he has no heat source) and gear with him for the entire route. The Grafton, North Dakota, native will be pulling 150 pounds of gear spread out on two sleds behind him as he skis.

Updates:  As of Thursday, Ty Olson was making steady progress on his 250-mile ski trip across the top of Minnesota.

He is breaking trail on his solo journey that is aimed at raising awareness of Native American issues and is raising money to provide firewood to needy people on the Pine Ridge Reservation in South Dakota. He’s now raised more than $22,000.

Olson left the west end of Rainy Lake on Feb. 11. A week into his trip, Olson had skied the length of massive Rainy Lake and Namakan Lake and was crossing Sand Point Lake, heading east to his destination at Grand Portage, according to a GPS transponder he is carrying. The trip could take 30 days or more as he skis along the Minnesota-Ontario border.

Late Tuesday, Olson posted this report: “Hopefully my final morning in the -30°s. Last night I woke to a pack of wolves howling bloody murder just outside my tent. It felt surreal as it was already still, eerie, and moonlit. This morning I found their tracks only a hundred feet away on the island over. I was too cold to be scared. And they almost never bother humans. But it feels like I’m following them. I don’t go an hour without crossing tracks.”

To follow his trip, or to donate to the cause, go to: skiforfire.com
← A Collection of Simply Beautiful Minnesota Photographers Winter Ice Captures with a Mindful Finale Black History Month: Volunteers help Twin Cities Homeless Youth Feel like Royalty for a Day! →
more people/passions