Restaurants once sourced from local farms, what are those farmers doing now? 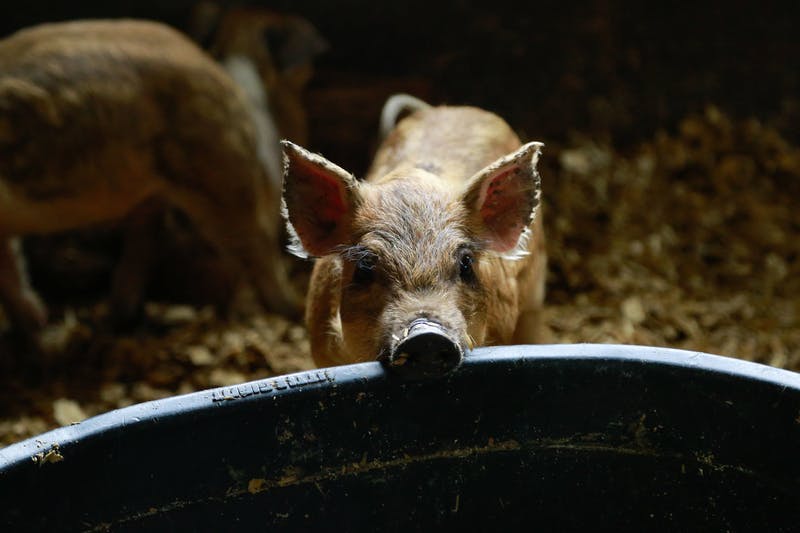 When we met Carla Mertz at the end of February, business was great. The Iron Shoe Farm owner sold mangalitsa hogs, Hereford beef, Muscovy duck, cooperatively farmed local rabbit, edible flowers, and microgreens to 25 restaurants in the Twin Cities. Her clients included some of the metro’s top, chef-driven destinations: Tilia, the Bungalow Club, Young Joni, the Woman’s Club of Minneapolis, and Fhima’s, to name a few. Iron Shoe also had two hogs bound for this year’s Minneapolis stop of Cochon555, and was set to debut a new dinner on the farm series this month. The first three events had already sold out.

“Then COVID-19 hit and we immediately lost 90 percent of our business model. We were watching the news and they said restaurants are closed until, you know, that first date, and my stomach sank. And I had the thought process of ‘I think I’m going to throw up.’”

“We really had to learn how to adapt and shift really quickly,” she says, now. “In a matter of, like, two hours the crap hit the fan.”

With her restaurant clients on life support (if they were operational at all), Cochon555 postponed indefinitely, and those dinner on the farm events tentatively pushed until May, Mertz was staring at 100 hungry hogs that needed to go somewhere, and tens of thousands of dollars worth of microgreens – the farm’s tiny cash crop, which sell by the hundreds each week at summer’s peak – spoiling quickly.

Contrasting dire reports of farmers across Minnesota smashing eggs, killing off livestock prematurely, and dumping produce due to lack of demand, Mertz kept a cool head.

“With microgreens, they’re perishable; we can’t just let them keep growing,” explained Mertz. “We could’ve given them to our chickens, but they’re a food source, so instead I dropped them off at Hope Breakfast Bar… [and] to Justin Sutherland at Public Kitchen when they were doing their community open door pantry. We lost $16,000 worth of that product category alone.”

Beyond the shock of change itself, seeing such large figures go poof is scary no matter the industry. Mertz has just come up on the seven-year anniversary of purchasing the farm 50 miles north of Minneapolis, after a professional departure from 20 years in high-end luxury design. Those seemingly disparate professional worlds, the first-generation farmer says, both depend on human connection and a willingness to network.

With her spring plans devastated, Mertz hustled to set up an online store on Iron Shoe’s website. Building this “pantry” involved securing a bevy of licenses from the state, all so she could act almost like a digital general store. Products range from flour, syrup, and cheeses, to proteins like rabbits, lamb, duck, and more – drawn from a waiting list of 50 Minnesota farms deep, all in situations like her own. There’s even a “Buy a Pack Give a Pack” option available in customizable sizes, that lets buyers take home half a CSA share’s worth of consumables, while the other portion is sent to Sherburne County’s Caer Food Shelf.

The quick pivot to online proved mutually beneficial. Mertz was able to recoup what would have otherwise been losses for Iron Shoe, including those Cochon hogs, while providing neighboring farms a platform to sell their products, too.

Mertz is quick to recognize how precarious people are feeling right now, especially related to food. “You see people posting about what’s going on with some of the larger Smithfields and Cargills now closing, and it causes a sense of panic because it’s like, ‘These big places are closing, how are we going to get our food?’”

She says she issues the same advice as always to those folks: Buy local.

“I look at it as: If you’re in Minnesota, do the best you can to buy products that are from our state. It’s going to help so many people. There’s wealth in neighborhood.”

And if you’re entirely lost, she says Minnesota Grown is a fantastic resource for those interested in buying from ‘local farmers’ in theory, but who may not know how to do it. For 2020, their online directory has 81 CSA members and 994 browseable listings, which makes buying local more approachable from a digital distance than ever before.

“A key tool Minnesota Grown has been able to offer in helping customers connect statewide is our map of farms/markets with products available direct-to-the customer, as well as a CSA-specific map with pick-up location filter,” said the org’s member service coordinator Karen Lanthier.

“These maps are able to be filtered by location, so people can narrow-in on the farms/markets nearest them, and we’ve been sharing our ’What’s In Season’ guide so customers know when different types of fruits and vegetables will be becoming ready.”

With the growing season ramping up, and many farms already at CSA capacity based on last year’s sales, Lanthier told City Pages she’s also seeing a turn toward smaller, local-based purchasing from consumers. “We’ve heard anecdotally from other producers – with items like eggs, meat, dried beans, grains/flour, and seeds – who are seeing a greater-than-usual interest and sales this year compared to last year at this time.”

As Iron Shoe’s new online pantry comes into its own, connecting shoppers with precisely the products Lanthier mentioned, and the restaurant world reboots itself, Mertz is finding her legs in a new field – one that’s even more interwoven with the farming community.

“I think [the store] gives other farmers hope that there’s a module out there that they can learn from.”