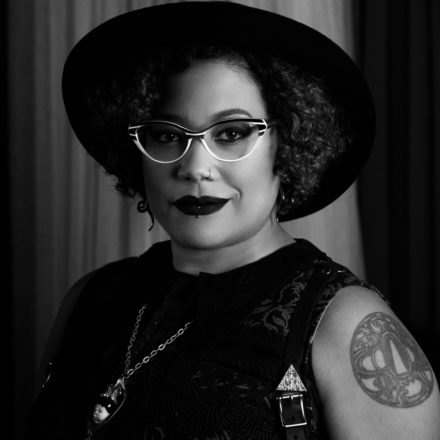 Samantha strives to help women feel confident, strong and comfortable in their own skin. She believes they can all be beautiful warriors!

Samantha Rei draws her inspiration from such illustrators as Chris Riddell, Brom, Tony DiTerlizzi, Brett Helquist and Mihara Mitsukazu as well as stories like Alice in Wonderland and Snow White. Her hero Alexander McQueen along with designers Vivienne Westwood, Hirooka Naoto, John Galliano, and Anna Sui have all influenced her style.

In 1998, Samantha began attending the Perpich Center for Arts Education in Golden Valley, Minnesota, choosing to hone her skills as an illustrator and painter so she could pursue comic book art. After graduating in 1999, she spent some time at the College of Visual Arts (CoVA) in Saint Paul to major in illustration before continuing her education at the Minneapolis Community and Technical College for Apparel Technologies. She’s been featured in Huffington Post, Shojo Beat, the American Gothic and Lolita Bible, Gothic Beauty, Glamour UK and Vogue UK. Samantha was named one of 2014 City Pages “Artists of the Year” and 2016 Best of the Twin Cities “Best Fashion Show” and 2016 and 2017 Reader’s Choice “Best Local Fashion Designer.” In 2015 she authored and illustrated a how-to book on subculture fashion design called Steampunk and Cosplay Fashion Design and Illustration. Samantha was a contestant on season 16 of Lifetime’s Project Runway, the final season to appear on the station.

The former Project Runway contestant and fashion veteran on designing during a pandemic; the importance of supporting Black-owned businesses. 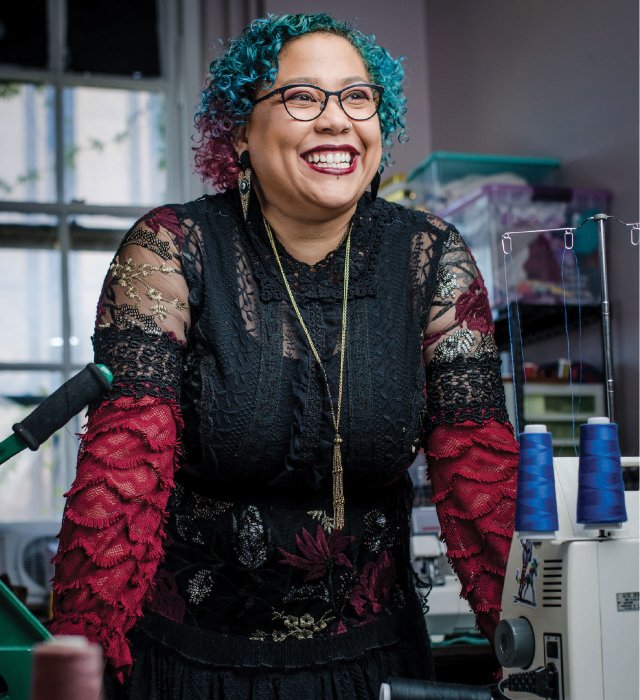 A legit “Jane of all trades” creative, local fashion veteran, and former Project Runway contestant, Samantha Rei doesn’t just create goth femme–inspired garments for a line that carries her name. She’s also an alternative-street-fashion book illustrator and creator of a line of dramatic-hued lipsticks with Twin Cities–based cosmetic house Elixery. We caught up with the larger-than-life designer to find out what she’s up to and how she’s using her voice—and platform—to evoke change.

You’ve been on the scene for 20 years. For those who are just meeting you, how did you get your start?

Growing up, my mom, a single mother with three kids, made a lot of stuff for us as both a creative outlet and a way to keep costs down. Like her, I’ve always been an artist, but I discovered fashion in middle school. I just loved the idea of making wearable art, so I started illustrating in my sketchbook and eventually began making pieces for myself and friends using an avocado-green hand-me-down sewing machine. Think: prom dresses at $100 a pop. Talk about big money!

You’ve had the chance to create pieces for some impressive folks, including Lt. Gov. Peggy Flanagan. Anyone else?

I loved working with Lt. Gov. Flanagan—she’s a cool chick! I’ve also had the chance to make garments for some of my favorite musicians, like Brian Viglione, drummer with The Dresden Dolls and Violent Femmes, and Minnesota-born-and-raised drummer Jonathon TeBeest.

Your first label, Blasphemina’s Closet, was one of the first three Lolita [a style of Japanese subculture fashion] lines in the country. How has your style shifted?

Lolita celebrates femininity, youthfulness, and modesty (think petticoats, ruffles, lace, stockings), but it’s a very niche market, so I couldn’t experiment as much as I wanted to. I’m still a very modest designer, and even if I delve into something sexy, it’s my version of sexy. I’d describe my style as a combination of goth, punk, whimsy, and femme.

You use your platform to champion other Black designers and artists. Tell us more about that.

It seems that until now, I, along with a few other Black designers and creatives, was constantly being asked to sit on the panels or present in front of design schools. But there are so many others in our community, and we need to notice them. Right now, I’m sharing others’ work and ways to support BIPOC-owned businesses more consistently than usual because eyes are on us. What’s sad is I don’t know when people are going to lose interest, so I’m trying to do it as much as possible. I’ve gained almost 4,000 followers on Instagram in the last month. I’ve never had this kind of engagement, not even when I was on Project Runway.

Has engagement translated into action?

The pandemic’s put a whole new set of restraints on being a designer, but I’m seeing an uptick in monetary support. People are signing up for my Patreon, where I share behind-the-scenes glimpses from my studio, and buying my “Beauty Strength Rebellion” totes that benefit the Darnella Frazier and #RestoreNorth funds. A few years ago, I collaborated with my friend behind Apatico, a leather harness and accessories brand, to raise money for charities. After George Floyd’s death, we decided to bring the collection of accessories back and have raised over $2,500 for community organizations.

What does it mean to you to be a Black female designer in Minnesota?

It’s always been an uphill fight to be noticed and validated. My fellow Black artist friends and I always talk about how it seems we have to work twice as hard to get to where other people are. I’ve been at this for 20 years, and it took me going on television and a global tragedy for people to realize the importance of supporting Black artists. I don’t like that feeling! That said, we are very fortunate that we are now getting the notice we’ve been craving to keep our businesses afloat, but it shouldn’t come at the expense of somebody’s life—or from a place of guilt.

How can we keep the momentum going?

We can’t stop posting or sharing. I’m hopeful that this is the tide change, the “oh my gosh” moment. I’m happy that people are opening their eyes—I just hope it continues. I’m going to be 40 in September, and I never thought I’d see this type of shift in my lifetime. It’s about time. I don’t want to make people feel bad, I want them to do better. It’s not just about me, my sales, or engagement—it’s more like, we’ve all been here this whole time. Why are people just now seeing us?

What’s next for you?

I’m starting to dip my toes back in and take bridal clients, and I really want to do a collection of high-end outside pajamas (I began sketching last year and have further solidified the idea in quarantine). I want to show people that it’s possible to be comfortable and cute when running errands. Also, I’m a total nerd and absolutely hate irresponsible costuming when it comes to sci-fi and futuristic media, so I created a new YouTube series, Cinemattire (where I analyze costumes in television and movies), which my patrons on Patreon currently have access to. My hope is to make it public in September.

We chatted with former #projectrunway contestant and fashion veteran @samanthareiofficial on designing during a pandemic, and the importance of supporting Black-owned businesses. Click the link in our bio to read the full interview! 📷 by @travisandersonphoto