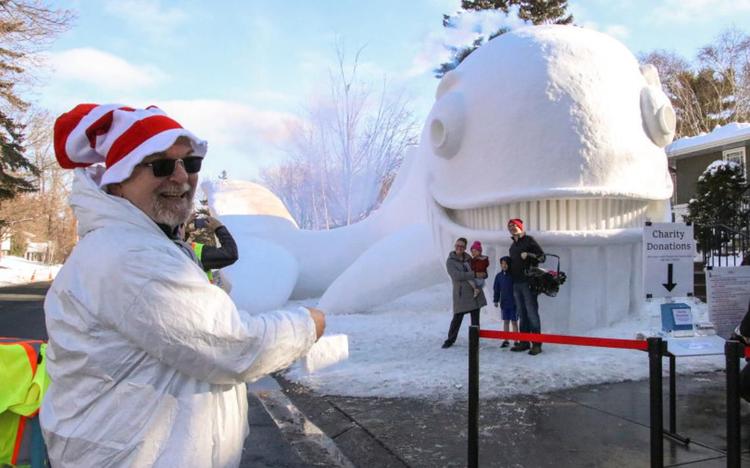 Most sea creatures don’t mind a little rain.  But Walvis the Whale, a 22-foot-tall snow sculpture in New Brighton, nearly became Walvis the minnow during the after-Christmas storm that brought ice and rain to the metro for several days. “We had 24 hours of just wasted work,” said Austin Bartz, 25. He and his brothers, Trevor, 24, and Connor, 21, unveiled their ninth annual creation Saturday, a few days later than their planned New Year’s Day reveal.

Less than a week before the grand opening, the brothers and their friends were frantically working to cover the giant whale with tarps to try to protect it from the rain. But the 40-degree temps did damage too, turning the hard pack to fluff and giving the guys another day of work rebuilding the whale.

Guests visiting on Saturday were none the wiser to the brothers’ behind-the-scenes struggles.

“It’s just amazing what they do,” said Andy Tretter of Woodbury. His daughter Samantha, 11, had softball practice nearby, so they decided to finally come see the snow sculptures they’d been hearing about.

The brothers, who began gathering snow shortly after Thanksgiving, keep their fans updated with regular posts and videos on Facebook and even sell Bartz Bros. merchandise. This year they are partnering with One Day’s Wages to raise $50,000 toward creating access to clean water for 1,350 people in the remote districts of Niger and Uganda.

Donations can be made online or on-site; $25 gets a guest a photo with the whale’s blow-hole spouting what looks like steam from the top of its head. The effect is made with a smoke machine and operated remotely by Dick Bartz, the brothers’ self-proclaimed “crazy uncle.” On Saturday he was dressed in a tall red and white striped hat engaging guests like a street hawker, pointing them to the donation box.

Fans on Facebook following the 900 plus hours of labor put into building the whale got an education in snow sculpting.

Once the snow is collected, the guys piled most of it into a tall wooden frame which was later removed once the snow settled. For detail work, such as the rectangular baleen for the whale’s mouth, they haul snow into their garage which is heated to about 80 degrees. This turns the icy snow into packable snow which is then put into handmade forms to create shapes.

In addition to the whale, they built a walled path fit with lights and signs touting information about whales. They even created their own tools out of wood and chicken wire to smooth out the whale’s exterior. The tools were on display for the curious.

The sculptures, which started with a puffer fish in 2012, were inspired by a trip to Florida. All of them, which include a walrus, shark, turtle, octopus, fish and lobster, have been creatures of the sea.

Crowds to the free event have increased over the years, and the brothers believe the Ice Castles event, which opens Sunday at 1500 Old Highway 8 and draws about 75,000 visitors, may bring even more this year.

Walvis will be available for public viewing through Feb. 6 at 2777 16th St. N.W. in New Brighton.