Is soaking in a frozen Minneapolis lake the secret to good health? 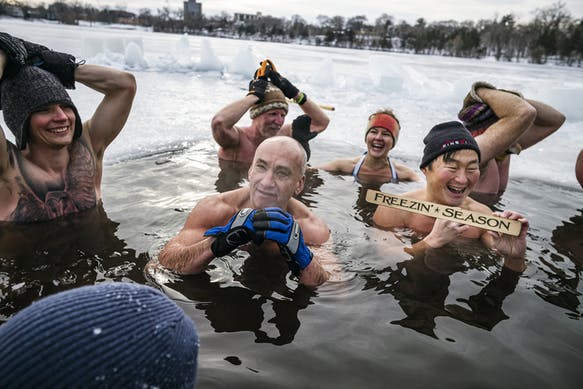 Dane Edward Miller, from left, Leo Royzman, Chad Juncker are all lovers of the ice bath at Cedar Lake in Minneapolis.

Meet the people who think soaking in a frozen Minneapolis lake is the secret to good health.

The popular “biohack” cold-water immersion is gaining ground with Twin Cities residents and some scientists. Ponce de León’s search for the fountain of youth in Florida is just a legend. But about 1,500 miles to the north, in the icy waters of Cedar Lake in Minneapolis, dozens of people think they’ve found the next best thing.

On a recent Sunday around 9:30 a.m., a diverse group of about 20 people dressed in swimsuits trekked to a spot near the shore on the west side of the lake and immersed themselves in an 8-by-12-foot rectangular hole cut in the ice. Later in the day, another group of people gathered to do the same thing.

This is something that happens every Sunday throughout the winter.

Some people come several times a week, and stay for a good, long soak of five, 10, 15 minutes or more. Except for the knit hats, they look like they could be relaxing in a hot tub as they stand in water that ranges from waist- to neck-deep.

Throughout the winter, biohackers maintain a hole in the ice on Cedar Lake in the belief that regular cold-water immersions make them healthier. Called cold therapy or cold thermogenesis, ice-water bathing is a practice that biohackers and assorted others believe makes them healthier.

The Twin Cities Cold Thermogenesis Facebook group, which was created in 2016, claims the frigid dips do everything from increase testosterone in men to boosting brown adipose tissue. (The so-called brown fat or “good” fat may be helpful in combating obesity because it burns calories to create heat.)

Vold and others say chilling out in the water combats inflammation, helps them sleep better and improves their focus and endurance. Some said they’re inspired by Wim “The Iceman” Hof, a Dutchman famous for his breathing and cold exposure technique called the Wim Hof Method.

The Cedar Lake group would probably meet the approval of David Sinclair, a Harvard genetics professor and longevity expert who thinks that cold exposure may help slow the aging process.

Maria O’Connell, the organizer of the afternoon session, has been immersing herself in an ice-filled horse trough in her backyard since 2011. “Initially it’s a little uncomfortable,” she said. “You end up getting better the more you do it.”

But many say the frigid dunks are a mood-altering, even pleasurable experience.

“It makes me happy. I think it’s adrenaline,” said Allison Kuznia, 42, of Minneapolis.

“It’s kind of a treat to go out and get really cold,” said Nick White, 46, of Minneapolis. “It gives you a feeling of euphoria.”