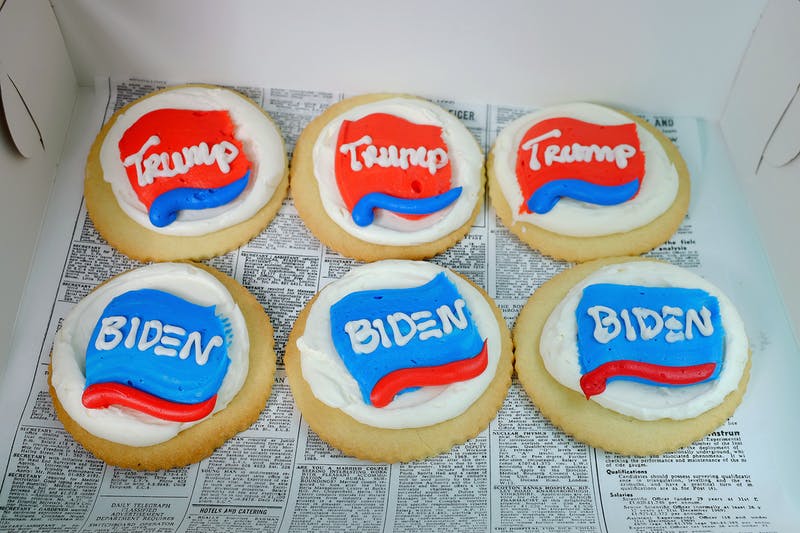 What do you think is the most captivating (legal) cookie available on the market right now?

Opinions be what they may, but the only acceptable answer here comes piled high with red, white, and blue frosting, and can be found in Red Wing. Each costs $4, and will be counted as a vote for president. Sort of.

Every four years, Hanisch Bakery and Coffee Shop celebrates democracy in the sweetest way possible: by hosting the Presidential Cookie Poll. “It’s a fun election poll that just happens to be pretty darn accurate for some reason,” says Bill Hanisch, the establishment’s chief manager and owner.

In the 1920s, the bakery was called Quandt’s. It’s undergone several ownership and name changes since then, but Hanisch is sure the Braschler family conceived of the cookie poll we recognize today during the Mondale-Reagan election because he worked under them starting when he was 15 years old. Though he’s not certain why the poll first ran back in 1984, the current owner bets it was a simple move to drum up business.

When Hanisch bought the bakery in 2007, he understood he would also become ringmaster for a unique political circus that’s getting more unwieldy each election cycle. So far this year, Trump’s cookies have outsold Biden’s by a mile.

Hanisch begins by explaining: “Our cookie poll has always followed the popular vote, including in 2016 for Hillary Clinton, and 2000 when Al Gore won.” Complicating this spooky, 36-year streak further, the bakery’s poll hasn’t been wed to a two-party system. Back in 1992, the Braschlers added a Ross Perot cookie into the mix… and when the (actual) polls closed, it still didn’t mess with results. The cookies and ballots aligned with a nation swooning for the sax appeal of Hillary’s husband.

Today’s Presidential Cookie Poll has been 99 percent untouched since the Mondale-Reagan election, despite the social, cultural, and technological norms changing around it. The purchase of one cookie—each frosted in buttercream that takes 18 pounds of butter per batch, and scrawled with the candidate’s name—counts as one “vote.” Say a 12-year-old walks in and buys a dozen cookies for Candidate X; that counts as 12 votes for Candidate X. She’s free to do it again the next day, too.

Sales clerks hand-tally the cookies as they’re sold, right in front of you. Everyone stuffs this ballot box out in the open.

Though it started as a sweet little lark—just a bakery in a picturesque town on the Mississippi River engaging the body politic and making a buck—with each passing year it can feel harder to take the Presidential Cookie Poll lightly.

“Our numbers with Obama/Romney were really big, a back-and-forth battle toward the end,” Hanisch said, referencing the bakery’s poll evolving with the times. “Then as we got some social media [attention], the Romney supporters tried to influence it. Because of 2012 we no longer give out numbers on Election Day. I did [hourly then], and this one guy came in and bought however many Romney cookies he needed to put Romney in the lead. He didn’t even get the cookies—he just gave me the money.”

Beyond the numbers, even customer behavior mimics the overall mood of voters in a particular election cycle. Hanisch says cookie numbers were down overall in 2016, and customers were less ostentatious while making their purchases.

“It felt like no one wanted to say who they were voting for, and it reflected in the cookie poll numbers.”

This year, a WCCO segment was distributed to Los Angeles and Massachusetts CBS affiliate stations, substantially raising the bakery’s profile. At one point, Hanisch says he was greeted with 96 emails at once asking if they’d ship cookies to either coast. (They won’t, but thanks for asking.)

This, too, touches on the customer base the cookie poll attracts (and counts). “It’s not just a representation of Red Wing,” says the baker, who noted an uptick in sales during the summer months. “Especially this year, we’ve had a really large influx from the metro area, with people just trying to get out and enjoy themselves.”

Hopefully without taking the fun out of the poll—something its operator loathes, and says participants from both sides of the aisle are wont to do—we asked someone whose field of expertise is brains and ballots why these specific cookies may so accurately reflect the popular vote.

“As social scientists say, this is an interesting pattern and an intriguing one,” says Dr. Christopher Federico, director of the University of Minnesota’s Center for the Study of Political Psychology. “It also kind of feels a bit Groundhog Day to some extent—um, the event, not the movie—in the sense of it’s sort of this bellwether.”

To really access the reflective power of Hanisch’s cookie poll, everyone involved knew it would require proper long-term exploration. Nonetheless, Federico was kind enough to shoot from the hip and offer an educated guess at what’s up in Red Wing.

“Not everyone is going to buy a political cookie,” he began. Facing this choice while mired in doughnuts, pies, cakes, bear claws, and the pressures and stresses of their daily lives as they wait inside a bakery that may or may not be convenient, these cookies become an identity thing. “And those who do purchase them, may be more representative of the group of people who actually show up and vote.”

“I follow politics pretty closely,” Federico continues, using himself as an example to highlight a pattern some of us take for granted, “but there’s quite a bit of variability in the general population, and the extent to which people care about politics. A lot of people simply don’t care all that much about politics until maybe the week before an election.”

But if the cookie poll “rules” don’t line up with that of real voting, how does that track?

“One thing we do find with interest in politics is that in some respects, it’s a like a trait,” says the professor. “It tends to be stable over a lifetime—not perfectly stable; it varies somewhat with social conditions and what have you. But all other things being equal, people tend to be very consistently interested or uninterested in politics over the course of a lifetime.”

So the solo motorcyclist the baker mentioned rolling through a few weeks back who snagged a dozen Trump cookies after seeing the WCCO story? Super-engaged! Or the grandma who bought three cookies spanning two candidates this year for her granddaughters? Doing her part to foster that engagement trait in her kin.

As for Bill Hanisch (who’s more into sports himself, and “not, per se, your biggest political junkie”), he stays happy to host his historic event, where “any age can come in and feel like they’re part of the voting process. We’re just a little bakery in Red Wing trying to have fun.”