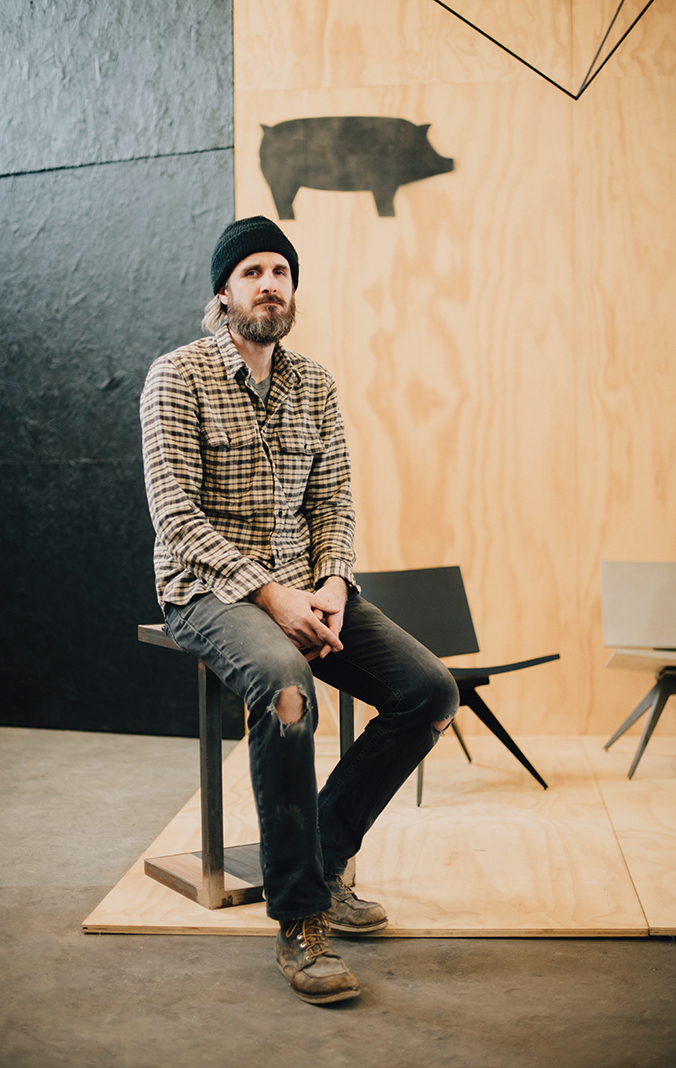 He gestures toward a 550-pound, cube-shaped armchair sitting in his northeast Minneapolis workshop. It is surprisingly comfortable. Of course, there’s also a forklift parked nearby. (“I definitely threw my back out a couple times,” he says.) Filling out the high-ceilinged room is a huge repository of reclaimed wood from Wood from the Hood, electrical saws, a welding station, and a massive sink. He’s also got a beautiful Les Paul electric guitar hooked up to a new pedal board—a fine way to pass the time while waiting for concrete to dry.

Now located in an industrial area near railroad tracks, grain silos, and a brewery, Wyman recently moved across the parking lot to this larger space. The idea of Concrete Pig began with him “destroying” his house in Golden Valley with remodeling projects. “I made a sink for my bathroom, then I made a table, just for the hell of it,” he says. These days, “The joke is that I should probably double-check the floor joists, with some of the furniture that’s in my living room.”

He loves the challenge of making something extraordinary out of a material that’s often dismissed as cold and ordinary. “People discount it,” he says. “It’s hard not to take it personally when what you make is so personal. [It can feel like] they’re discounting you as an artist, a maker, or builder. I hear, ‘I could go to Home Depot and pick up a $6 bag of concrete.’ My answer is, ‘Go ahead.’ Not to sound arrogant. ‘Honestly, go do it. It’s fun as hell.’”

In addition to spiffing up private homes, Concrete Pig’s creations—blending concrete, wood, and welded metal—make a statement at Modist Brewing, Dogwood Coffee, Northern Coffeeworks, and apartment buildings around the Twin Cities and beyond. Owning one of his creations doesn’t entail going to a showroom, saying, “I want that one,” and taking it home. Instead, as with any custom product, this is more like a relationship between maker and recipient.

Wyman still very clearly remembers the day he decided to make this a full-time pursuit. “I hate the word ‘regret,’” he says. “But if there’s any one thing, it’s not diving in sooner. If it lights a fire for you today, just do it and jump in completely. It feels like I’m playing with mud again.”

Shop for furniture by Concrete Pig at concretepig.com

Minnesota Monthly: What drew you to concrete in the first place?

It’s an unmistakable material. The imperfection, you don’t really get that in anything else. There’s something about the process of that material, as well. You can prepare over 90% of it spending days creating this perfect form. You can control the viscosity and the mix as much as possible, but once you pour it in that negative space, it is what it is, you have to let go. That’s what I love about it, every piece, no matter how much you control, you’re always going to get a slightly different outcome. I’m drawn to the imperfection.

Of course there’s a forklift parked in here.

The essence of the material is always going to be a heavy one. Anything in town or remotely close, I always like to drive it there and place it. I have an unhealthy attachment to the things I make. I also joke that I’m the worst salesman in the world. Someone might’ve been ready to buy but I’ll be like, “Why don’t you go home and think about it? Put some masking tape down and live with it.” The nightmare would be making something and having a client being unhappy with it. It’s heavy. I’d love to do it right once if possible.

What are you excited to do in the future?

Stuff I’m most excited for is some sculpture I’m hoping to land in the next year or two. Making things on a large scale. That’s always been a dream. Making a bunch of 550-pound chairs potentially and randomly dropping those throughout the city? Amost like guerrilla marketing. Having things out in public spaces and watching public people interact with those objects, I’ve always been infatuated with that. That’s the hope in the coming years.

How big can you go?

I don’t know. 50 feet high? The last couple projects, they seem to be getting bigger. A custom reception desk at Rafter, a new apartment in Northeast. It’s 3,000 pounds of concrete poured on site and almost 1,000 pounds of quarter-inch steel plate, which was the desk. That was a super fun project.

How much stuff do you have at home?

A lot. I had a friend come in. I was having a tough time with our living room. It’s kind of small. I had our sofa, and four chairs, and these other two chairs, like a chaise lounge. He’s like, “Sorry, but you’re going to have to get rid of four to five things.” I had a hard time doing that. I made this concrete credenza with primary colored sliders. I don’t think i could ever part with that piece. That’s always been a staple in the living room. That thing is heavy. I worry about the sag that may be happening over time.