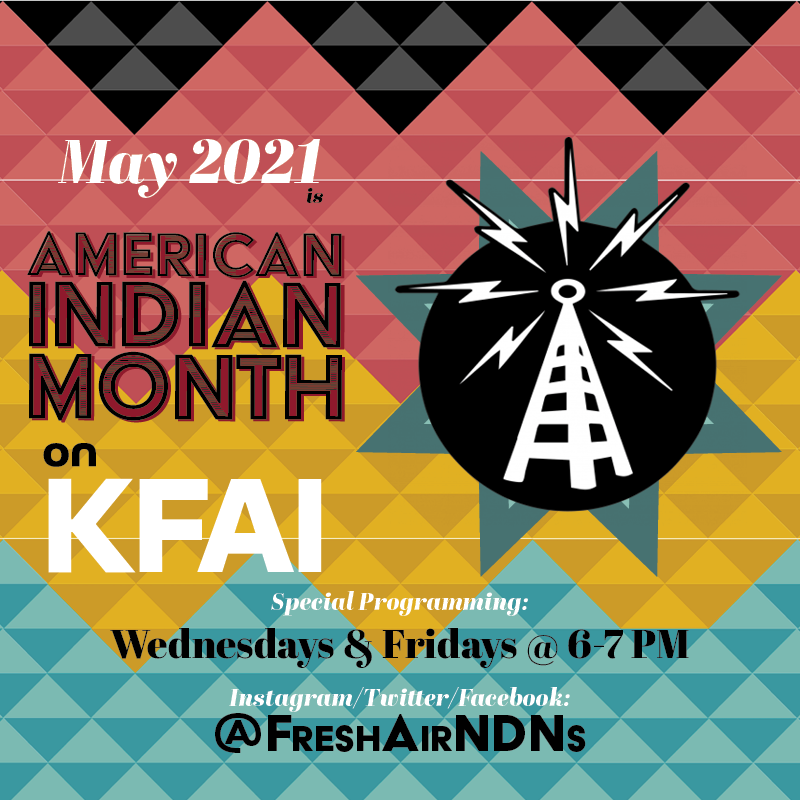 Come celebrate American Indian Month with us at KFAI! Each Wednesday and Friday in May from 6-7pm, hear special programs with native culture, discussions, and music.

Catch this all-star roster of your favorite KFAI hosts below:

KFAI is a volunteer-based community radio station that exists to broadcast information, arts and entertainment programming for an audience of diverse racial, social and economic backgrounds. By providing a voice for people ignored or misrepresented by mainstream media, KFAI increases understanding between peoples and communities, while fostering the values of democracy and social justice.

KFAI is a non-commercial FM radio station operating on 90.3 MHz in Minneapolis and covering the greater Twin Cities. KFAI is governed by a volunteer community Board of Directors, managed by a small paid full-time and part-time staff, and operated by a volunteer base of over 300. KFAI’s budget for 2021 is approximately $670,000.

KFAI is listener-supported, with over 3,000 members contributing nearly 50 percent of its income. Additional support has come from the Corporation for Public Broadcasting, the State of Minnesota, Legacy & Cultural Heritage Funding from MN State, the Minneapolis Foundation, and program underwriters.

KFAI has been broadcasting since 1978 with major signal expansions in 1982, 1994 and in 2008. It is currently broadcasting at 900 watts (directional) from the top of the IDS Center in downtown Minneapolis.