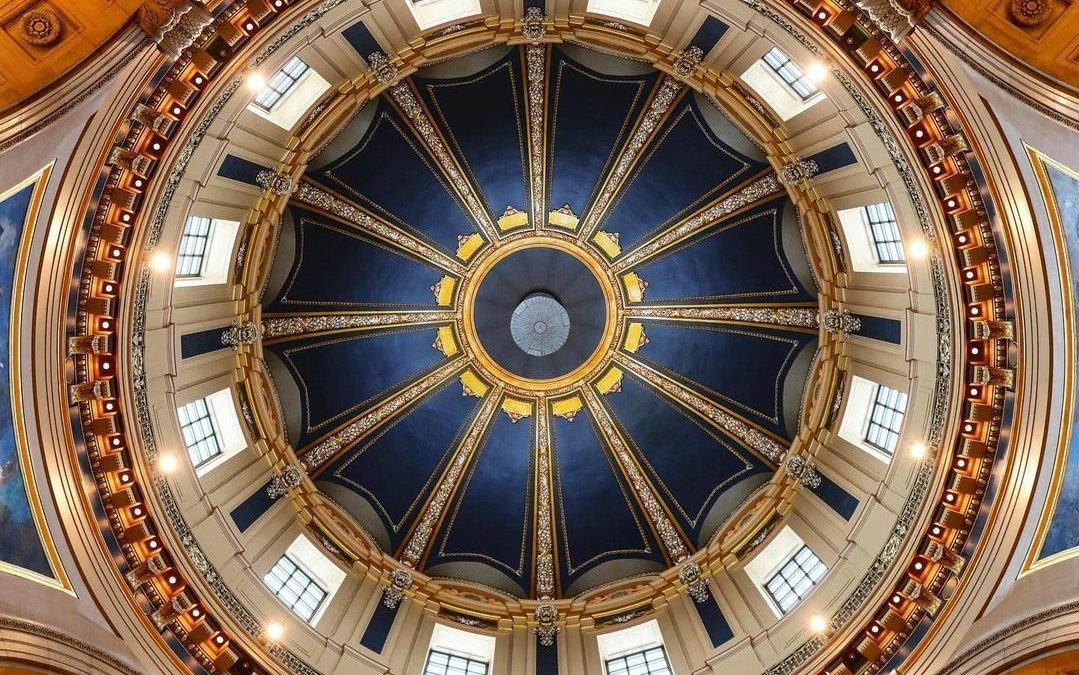 Minnesota’s State Capitol is one of the Midwest’s Most Spectacular Buildings!

The dome of the Minnesota State Capitol building in St. Paul, designed by Cass Gilbert. It is the second largest self-supported marble dome in the world, behind Saint Peter’s Basilica in Rome on which Gilbert based his design.The dome electrolier is lit every Statehood Day on May 11 when Minnesota became the 32nd state in the union (May 11, 1858).

Inspired by the Beaux-Arts architecture of the 1893 World’s Columbian Exposition in Chicago, architect Cass Gilbert was determined to design a building in the classical style, but with all the modern conveniences of the time. The stunning result is a towering white marble dome, fluted columns, graceful arches and commanding statuary.

The current state Capitol building has been the center of Minnesota’s government since 1905. To construct a building of this scale was an ambitious undertaking for Minnesota, which had only become a state in 1858.

Construction of the current Capitol began on May 6, 1896 and was led by architect Cass Gilbert, who would go on to design the U.S. Supreme Court building in Washington D.C. After nine years and a cost of $4.5 million, the Renaissance Revival-style building opened to the public on Jan. 2, 1905. 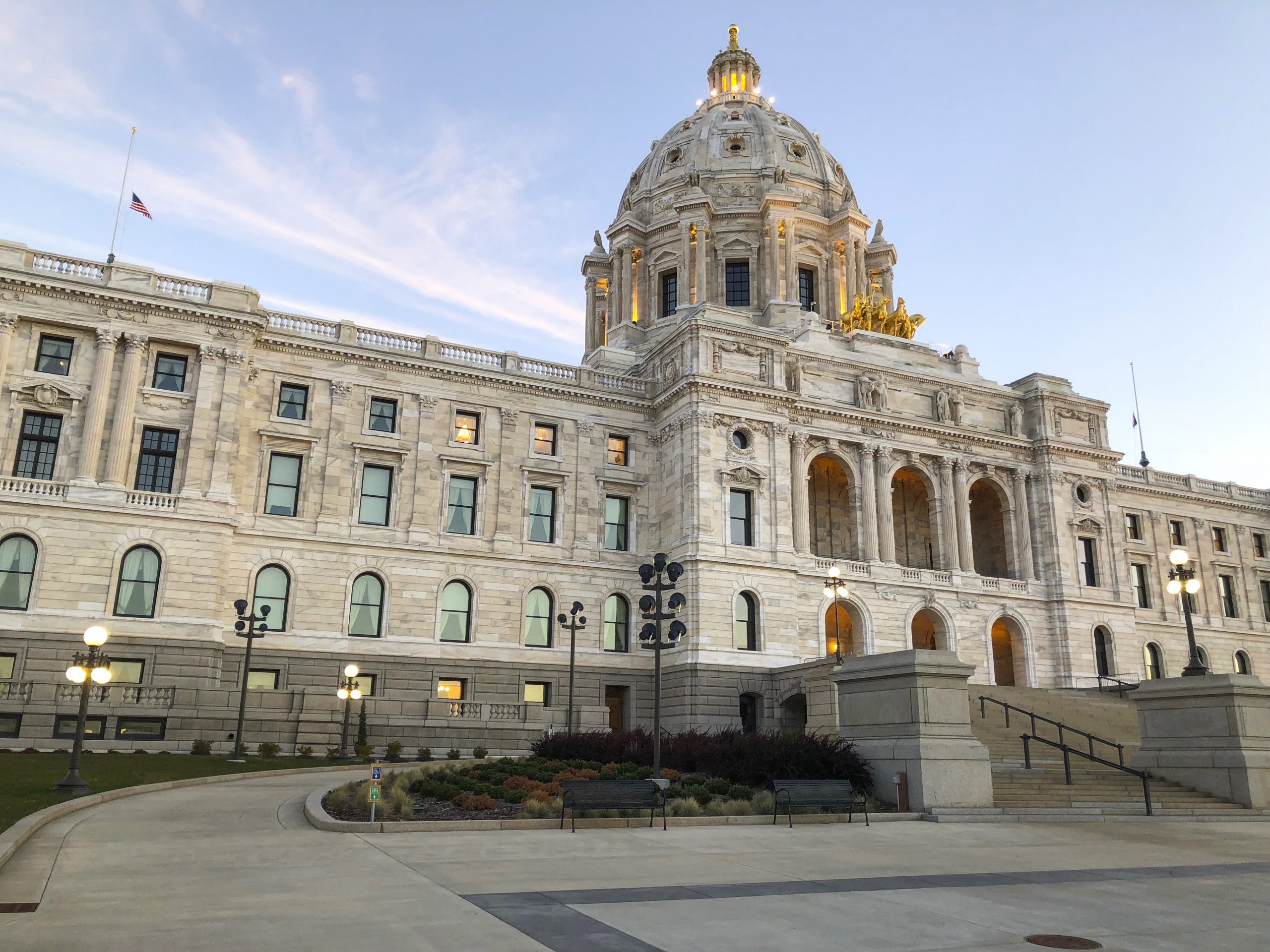 The exterior of the State Capitol is made of white Georgia marble and St. Cloud granite. Six marble statues above the main entrance greet visitors. Daniel Chester French collaborated with Edward Potter to create the golden sculpture group at the base of the dome titled “The Progress of the State,” commonly referred to as the Quadriga. The copper sculpture, like the ball on top of the dome, is covered with gold leaf. Below the Quadriga are six colossal figures representing “the Virtues” sculpted in white marble from designs by French (actually, the statues in place today are replicas carved in 1975-79 to replace the deteriorating originals). Twelve stone eagles stand guard around the dome, and the exterior is enlivened by classical wreaths, plaques, and a rich variety of carvings.

Cass Gilbert’s design echoes a famous marble-dome building — the Basilica of St. Peter in the Vatican, designed by Michelangelo more than 350 years earlier. The dome has three layers:

The gleaming gold sculpture is the Quadriga, the Latin word for a four-horse chariot. It was designed by Daniel Chester French and Edward C. Potter, and it is made of sheets of gilded copper hammered around a steel frame.

Cass Gilbert insisted on using Georgia white marble, saying that the use of a darker color would make it look “glooming and forbidding.” Gilbert won out over those who objected that Minnesotans would lose stone-cutting and carving jobs if stone from out-of-state was used. As a compromise, the general contractor, Butler-Ryan Co., leased the Georgia quarry and shipped the rough-cut marble to St. Paul to allow local craftsmen to do the work on-site. He also specified Minnesota-quarried granite for the ground floor level, steps, and terraces, and sandstone and limestone for the foundation and interior walls to fully represent the various stones from the state.

The Capitol is more than 430 feet long, from east to west. From ground level to the top of the dome’s lantern measures 220 feet — about the height of a 20-story building. Inside, the building has more than 300,000 square feet of floor space, or about 5 million cubic feet of space.

The stunning building quickly drew acclaim from around the country. Architects and artists praised its exterior, its huge marble dome, its self-supporting stairways and its magnificently decorated interior.

When the new Capitol opened, all the executive offices and the three branches of state government, state agencies and commissions, and the Minnesota Historical Society were located in the building. But as government needs expanded, state agencies and commissions, and over half of the executive offices moved out. The building evolved as well. Although the main public spaces were left mostly intact, remodeling and enlargement of offices and meeting rooms, renovation of chambers and partitioning corridors began occurring as early as the 1930s. 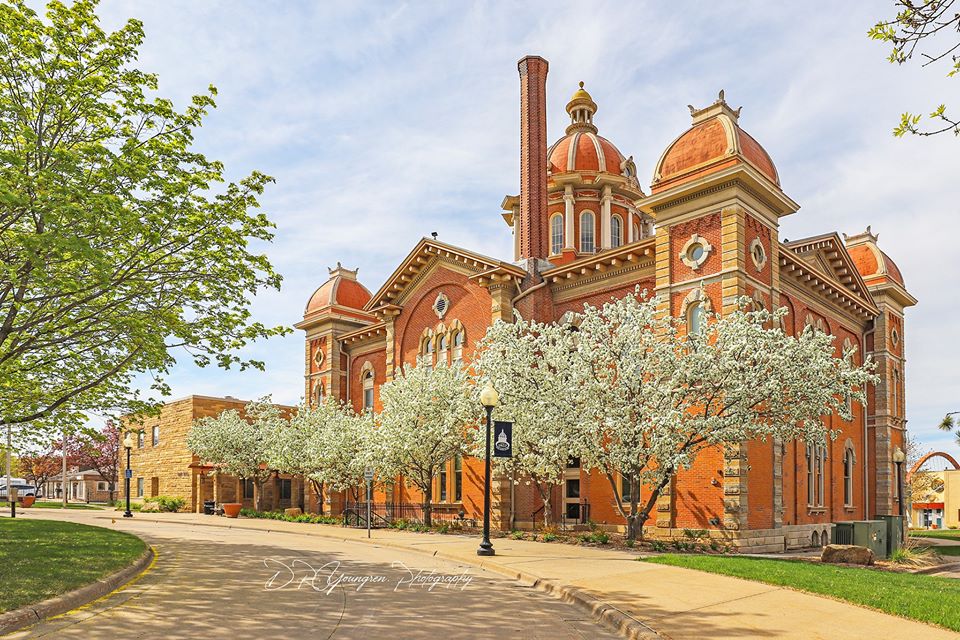 Hastings History is the focus for many visitors. Founded in 1857, the community works hard to preserve its history both in natural and cultural historic sites. Hastings is nationally known for its Victorian architecture and has a total of 62 buildings on the National Historic Register including 33 commercial buildings, 28 private homes, and 2 churches.

Included on the walking tour map is a building designed by Frank Lloyd Wright who was recognized by the American Institute of Architects as “the greatest American architect of all time”. The walking tour map is located on the back of the city street map or parks and trails map and can be found at the Chamber Tourism Office and City Hall.

Get Away to Someplace Close . . . Visit Hastings, MN

Whether you’re a tourist traveling through and need a place to rest or you’re looking for a family vacation that appeals to all ages, Visit Hastings MN has your best interests at heart.

Take a trip back in time with a visit to historic sites like The LeDuc Mansion, City Hall or enjoy a unique shopping and dinning experience in our Historic Downtown. If you’re into winter activities like skiing, snowshoeing, or ice fishing, this is the place to get your fill. Lake Rebecca is located right next to the Mississippi River and offers a safe, diverse fishing experience. There are also numerous lodging and camping options for visitors or even residents looking for a weekend getaway.

If you’re an avid golfer, there are plenty of courses to challenge you and your friends. Being within 20 miles from St. Paul, you’ll have access to big-city shopping centers, sporting events, and wildlife reserves. Other things to take advantage of include a brewery, vineyards and orchards, art studios, and 30 miles of scenic bike and walking trails.