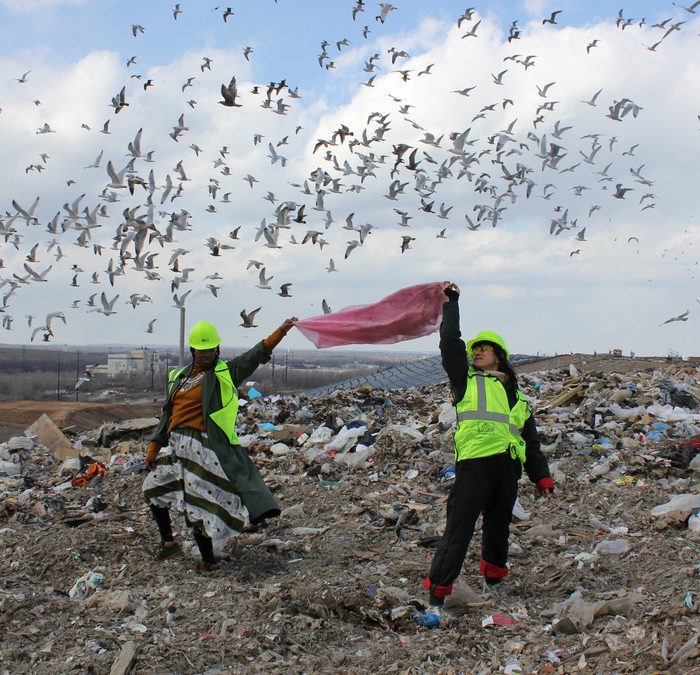 The Cut: A Busload of Fashion People Go to the Landfill.

In a landfill, shoes rise to the top, like cream in a cup of coffee. The buoyant rubber soles work their way through the tons of compacted garbage and layers of topsoil to float on the surface. On a recent trip to the Fairless Landfill on Morrisville, Pennsylvania, with a group of designers and FIT students, I saw three pairs of Crocs on a 20-minute stroll. Bobby Jones, who works at Waste Management, regaled us with stories of the weirdest things he’s seen come to the landfill. The winner? A whale, cut into half and delivered in two trucks.

Trash has been having a bit of a fashion moment. The New York Times heralded “trashion” as the new frontier — where designers would use discarded fabric to make gowns so beautiful you would never guess it was made with scraps. Upcycling is a buzzword at this point. But in order to conquer fashion’s massive waste problem, you have to understand what you’re up against. So that’s part of the reason why FIT students, Brooklyn-based designers, and I were hiking the Fairless Landfill last week. We were there because of the Slow Factory’s Landfills As Museums initiative.

Céline Semaan, a designer, researcher, and executive director of Slow Factory, started Landfills As Museums last year. She collaborated with adidas and partnered with Waste Management’s Environmental and Construction manager, Jay Kaplan, and Theanne Schiros, a professor of science and sustainability at FIT, to put together a field trip for the students so they could see, up close, where the majority of clothing ends up. Sustainable Brooklyn, a group that amplifies black and indigenous voices in environmentalist spaces, brought a group of designers, stylists, and small-business owners along, too. One designer, Akila Stewart, makes handbags out of old laundry-detergent containers, covered in scrap leather.

The field trip starts with a lesson about landfill anatomy. This particular landfill, which is handled by Waste Management, is four years old, covers 200 acres, and is expected to fill up in six more years. When it’s filled up, it’ll be covered in a plastic sheet, two feet of topsoil, and grass. Old landfills in the facility are now grasslands where rabbits and deer can graze. But over on the active landfill, that’s where seagulls hunt for food. The area even has a wildlife certification and a campground. This isn’t necessarily the best solution for handling garbage, but the team at Waste Management says it’s the best we have at the moment. And at least it doesn’t poison anyone, right?

One student grew visibly upset as a recycling expert explained how only less than 10 percent of all plastic in the U.S. is actually recycled. Dominique Drakeford, the co-founder of Sustainable Brooklyn, offered ways to reuse those unrecyclable plastics, like turning berry cartons into seed planters.

Dressed in a borrowed, oversize jumpsuit, Schiros reminded her students that when we say, “Throw that away,” the landfill is the “away” we’re talking about. “This is our garbage. That connection is critically important,” she said. “Waste Management gets a bad rap but they’re keeping our trash from poisoning us.” Many posed for photos on the landfill, using the trash as an educational content opportunity. But even though it was a pretty shame-free space (people were making awkward jokes about the plastic glasses we had to wear to walk the site), it was hard not to feel personally responsible for the trash all around us. Is that my bottle of generic nail-polish remover? Is that my faux-pearl necklace? Is that my Starbucks cup? Probably not, but it may as well be. The average American makes about four pounds of trash a day. We watched — and filmed — a truck dumping 20 tons of trash in a few seconds.
“[Seeing the landfill] makes me uneasy about entering the fashion industry, honestly,” Skylar Saba, a student at FIT, said. “Everyone’s very in their routine. It’s just like, This is how things are done. But there are so many opportunities. If a company brought their employees out to the landfill and saw their product in the landfill, I think it would change how they design.” The effect the trip had on most people was galvanizing — a chance to look at the scale of the problem before dreaming up solutions, rather than a lecture on thou shalt not create trash.

“This part of the life cycle is rarely seen and rarely understood,” Drakeford said. “We are a culture of disposability. Being able to experience this part of the system is important so we can come up with ideas about how to manage waste and mitigate it in our own communities.”

Walking around the active landfill, clad in neon vests and hard hats to keep us safe from being hit by trucks or pecked by seagulls, it became apparent why the outing was called “landfills as museums.” The term museum is apt, because it opened a space for curious reflection and spongelike learning, rather than a symposium offering concrete solutions. “Landfills are the archeological museums of the future,” Semaan said. “We wanted to create a space that removes all stigma around waste, from shame to fear to guilt around end of life, and explore landfills as a cultural site.”

You can imagine a museum in 2150 picking up trash from Fairless to put on display like prehistoric ceramics — a faux-pearl necklace; a lone size 13 Croc; hell, maybe even the remains of the bisected whale.