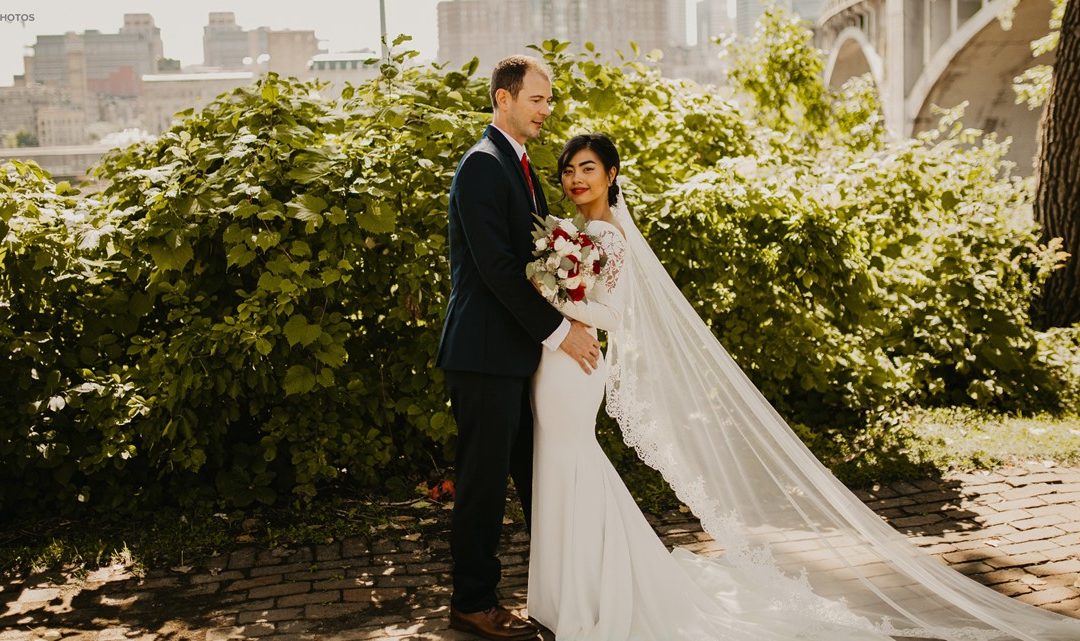 Sisterhood of the Traveling Wedding Dress: Tina Nguyen Got to Have Her Dream Wedding!

Kare11/Features: A Vietnamese immigrant to the U.S., she had two ceremonies – one for each home and culture. She hired all immigrant-owned vendors, from the food to the flowers.

There was a roasted pig, a chalk artist, a tall, handsome husband – and the perfect dress.

After the wedding, Tina had her dress cleaned and pressed. Then she posted it on Facebook Marketplace, marked “Free.”

Tina’s ad reads, “I absolutely loved my wedding dress, it was one of the best parts of being a bride. If you are planning your wedding, or know someone who is, and can not afford a wedding dress, please connect with me. I’ll lend my dress for the bride for her big day.” 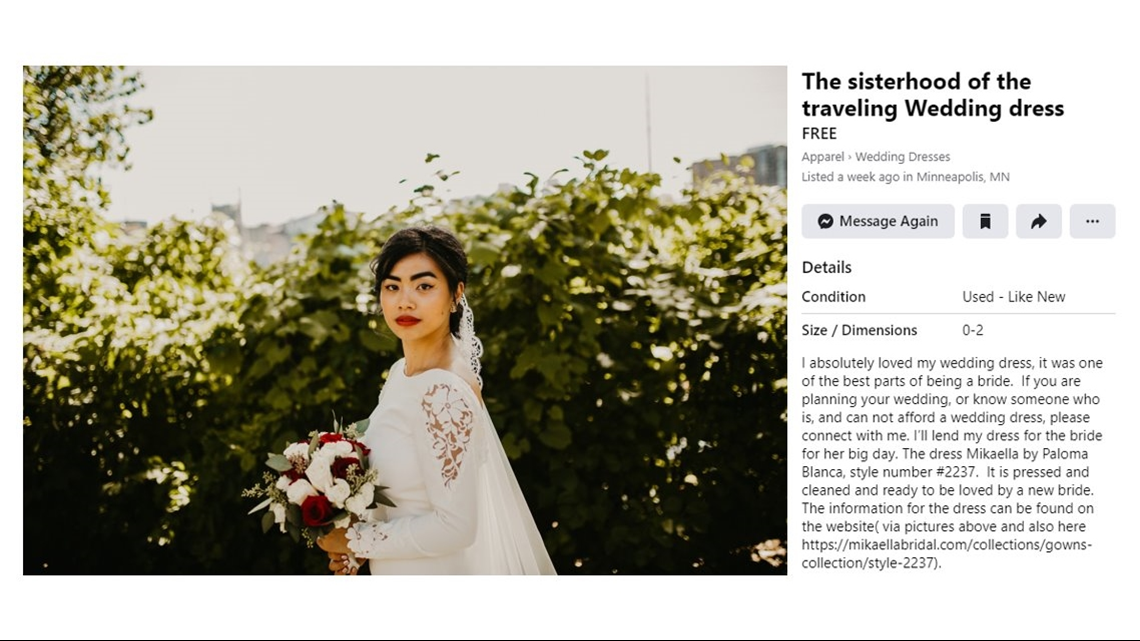 Credit: MVPHOTOS/Facebook
Tina’s ad offering her dress up to brides who can’t afford one.
–

To understand why Tina did this, it’s necessary to learn a bit of her story. She comes from a family of great struggle, and success despite the odds.

Her grandmother spent time as a prisoner of war. She raised Tina’s mother and even adopted another son. Tina’s mother in turn raised three children on her own. Tina came to the U.S. under an exchange program at 14 years old – with two weeks’ notice to pack up and leave her home.

“Very strong woman background in my family,” Tina said. “And we always, always just wanted to just to support and to empower women and give back.” 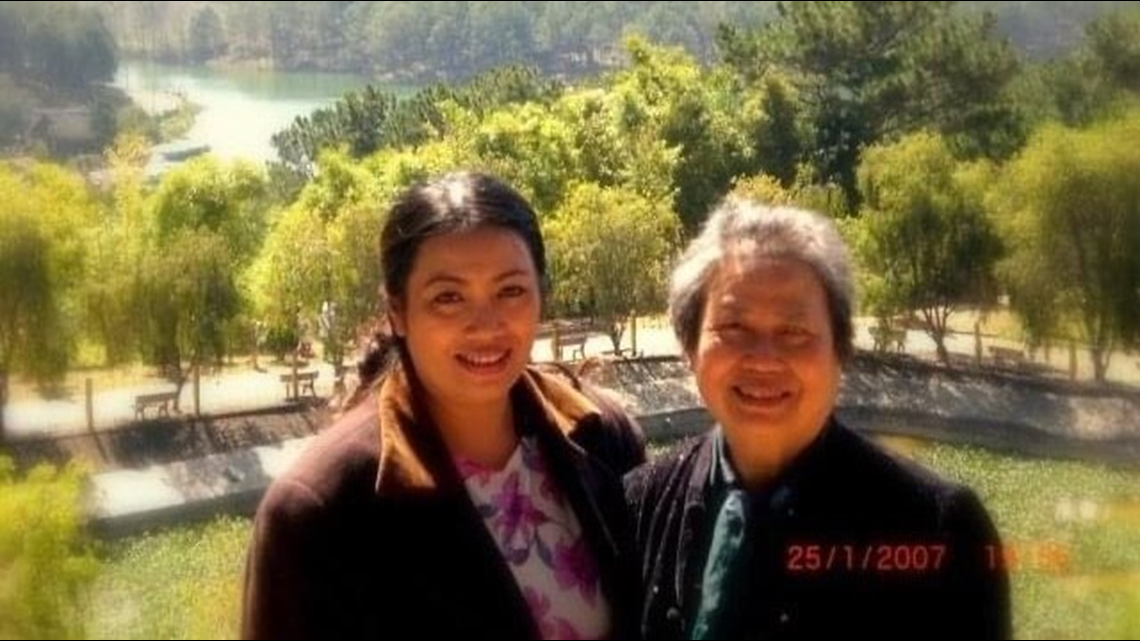 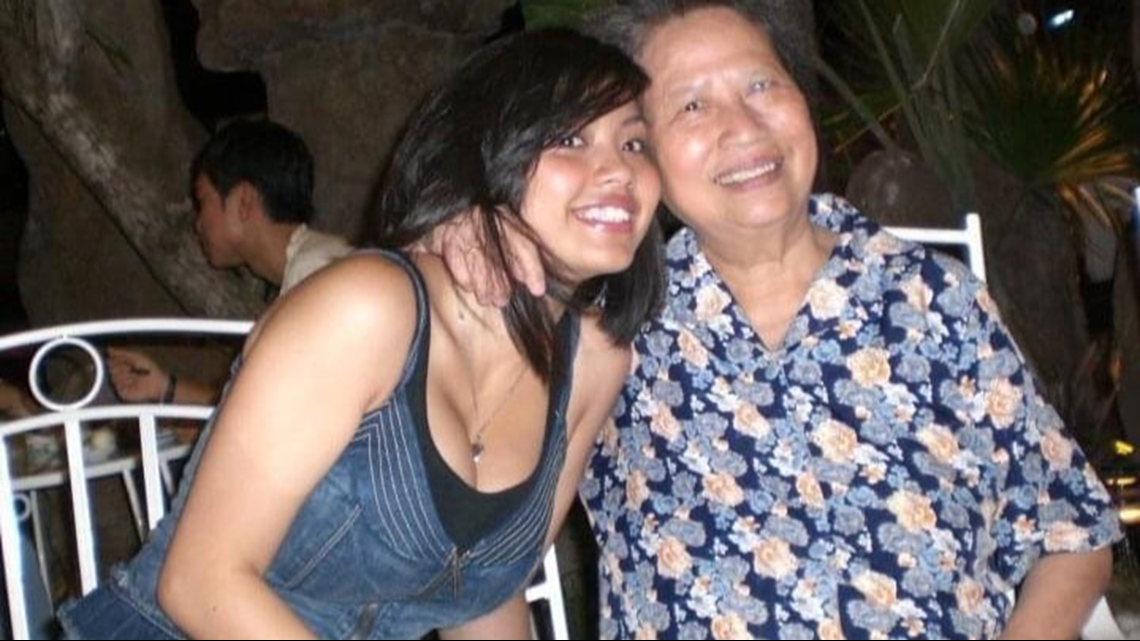 Credit: Tina Nguyen
Tina’s mother (left) and grandmother (right) both raised their families on their own.
–

Tina now works in machine learning. She just celebrated her one-year wedding anniversary, and recently got her green card through work. She calls herself an activist, with her late grandmother’s roots and words forming her foundation.

“She always reminded me of where we came from, the struggle, how she built an empire on her own, two hands and two feet by herself,” she said. “She’s like, you are privileged to live in a life that you currently have, and that privilege, you need to know and always, always recognize that.”

Tina and her grandmother, who Tina says “defied every rule.”

As Tina watched the U.S. devolve into the chaos of COVID-19 and erupt in civil unrest over racial inequities, she wanted to do something. It felt overwhelming.

She started seeing posts on social media from friends getting married.

“They’re going through this whole pandemic thing,” she said. “You know, the economics of it, to say, ‘Oh my God, you know, we have to change plans’ and all that. ‘Do we even have a wedding?’ And with that, you know, shopping for a dress, like, ‘How does it work? Is it safe?'”

Tina thought, “I have a pretty sweet wedding dress just sitting in my closet.”

And not just any dress. It’s a Paloma Blanca, retailing for over $2,000. It’s made with three layers of silk. 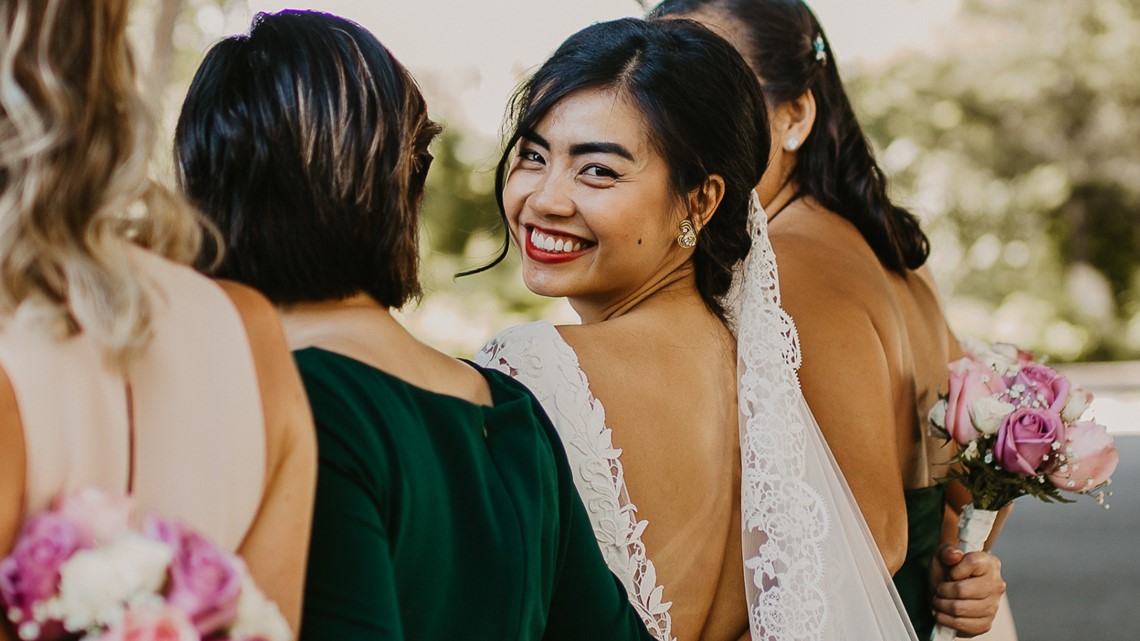 Credit: MV PHOTOS
Tina lines up with her bridal party for her September 2019 wedding.
–

With Tina’s family so far away, she said she’s blessed to have an “adopted” American family. The Haglunds welcomed Tina in after connecting with her at her graduation from Augsburg University.

When Tina tried the dress on for the Haglunds, she surprised herself by crying. She knew it was perfect – but it was expensive.

Jim Haglund told her, “It’s your one day. You get to be the princess.”

“I thought about, like, what a privilege it was for me to do that and to have that opportunity,” Tina said, remembering the moment. “And that’s why I’m doing this, too, right? It’s such a privileged day that so many people couldn’t, and right now, obviously, a lot of people are struggling.”

At Tina and Chris’ wedding, a chalk artist drew two hands holding one starfish each on the wall. That was the “logo” of the marriage, Tina said.

It’s a familiar story: A woman stands on the sand, throwing beached starfish back into the water. A child asks, “There’s so many of them. How can you possibly make a difference?” The woman throws another and replies, “I made a difference to that one.” 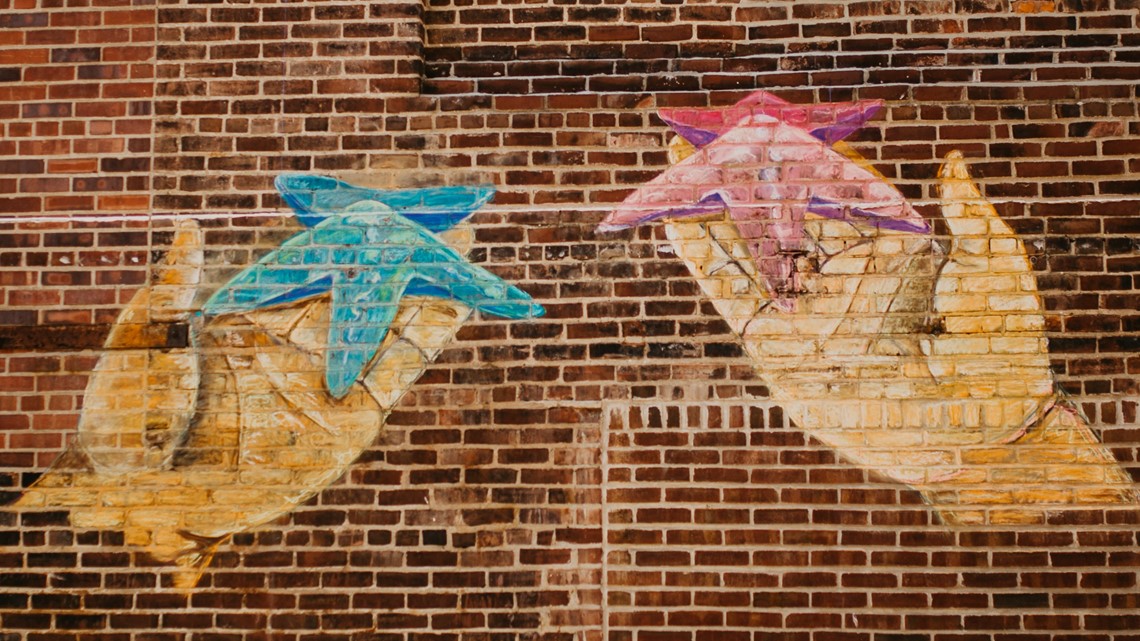 Credit: MVPHOTOS
Tina and Chris hired a chalk artist to draw the “logo” of their wedding: starfish.
–

“I always struggle with, like, how do I make a change?” Tina said. “And one of my mentors, she told me about the starfish story.”

It’s not that Tina sees herself throwing the starfish, though.

“I am the starfish,” she said.

She was taken in by different communities in the U.S. as a lonely teen and young adult, from Colorado to Oregon to Minnesota. She was “adopted” by a set of American parents who welcomed her into their lives for holidays, birthdays. She was raised by women who risked everything to give her the gift of safety, privilege.

She was the starfish who was rescued by the of the kindness of others.

“That’s just a reminder for the rest of my life, too,” she said. “It’s like, yeah, just one starfish at a time, one starfish.”

Tina has already had several people reach out about her ad. She hopes she can pass the dress to as many brides as possible – what she calls a “Sisterhood of the Traveling Wedding Dress.”

“I just want to offer it up and just, you know, share the joy,” she said. “It made me feel like a bride. I wanted that for all other brides out there, especially during this time, I want that for them.”

Update: After Tina’s photographer Madalyn heard what Tina was doing, she decided to offer up her dress as well. Tina has started a Facebook group for other brides interested in doing the same. 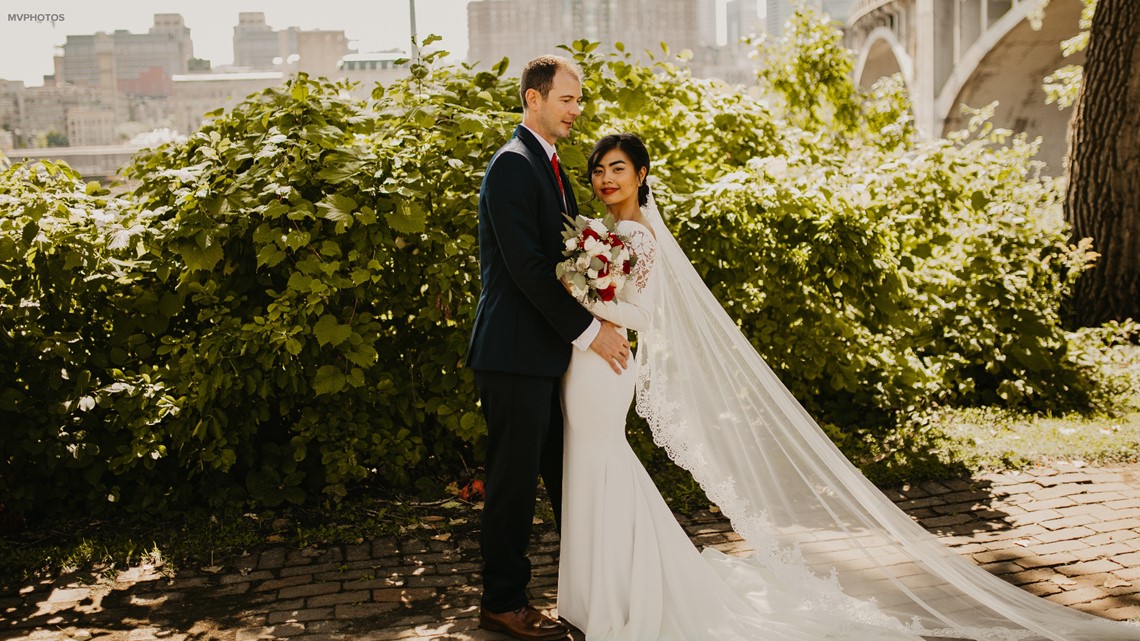 Credit: MVPHOTOS
Tina and Chris on their big day!