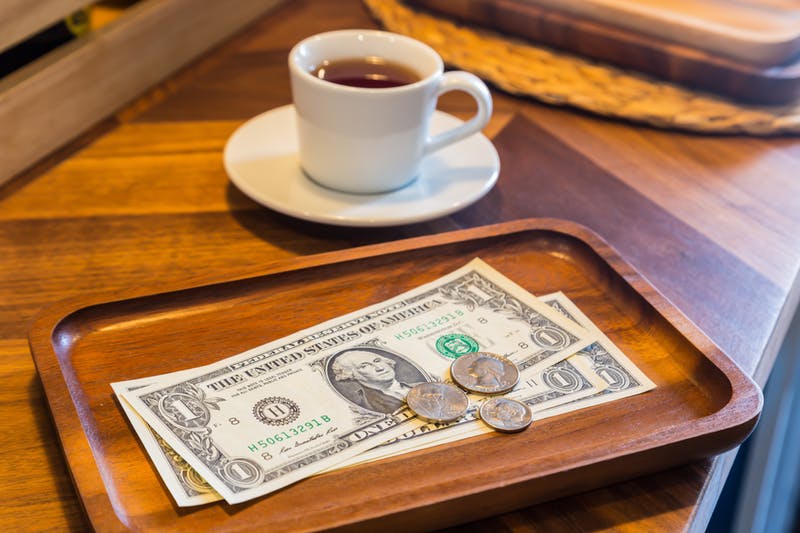 Minnesota’s one of seven states with no so-called “tip credit,” which lets employers factor an employee’s tips received into the mandatory minimum wage. This means no large employer (revenue above $500,000 annually) can pay less than $10.00 an hour, and no small employer (less than $500,000 revenue) can go below $8.50.

Do Minnesotans know this fact and have it in mind when they go to sign the check at a restaurant? Or are we just cheapskates?

Make that self-reporting cheapskates: A new survey says on average, Minnesotans tip second-lowest, percentage-wise, in America. We could’ve lied! We could’ve said we tip more. Instead, we choose to be stingy but honest.

The people at moneypenny.com say Minnesotans tip servers 17.21 percent, second-lowest in America, and higher than only Idaho’s 16.71 percent. Our Upper Midwest neighbors North (17.22 percent) and South Dakota (17.29 percent) are virtually tied with us, and ranked as America’s third-worst and fifth-worst tippers, respectively.

The survey breaks down responses by gender, with Minnesota’s men (17.37 percent) tipping only slightly better than its women (17.04 percent), and/or lying slightly more about being good tipped. Nationwide, results show no discernible pattern along gender lines. (Women are about twice as likely as men to have personal experience working a tipped job; they also make a lot less.)

More interesting, locally, is the generational gap. Consult any recent research and you’ll learn Baby Boomers (age 55-73) are easily the richest age cohort in America, with something around 50 percent of America’s total wealth. Gen X (age 39-54) has closer to 20 percent, while millennials (23-38) have less than 10 percent. The average Boomer ($1.2 million net worth per household) is worth more than 10 times as much as the average millennial ($100,000 average per household).

Maybe if these foolhardy millennials learned from their elders, tipped a little less and saved a little more, they could afford one of those things everyone’s talking about these days. What are they called again? Oh, yeah, that’s it. Houses.

by Mike Mullen in Food & Drink