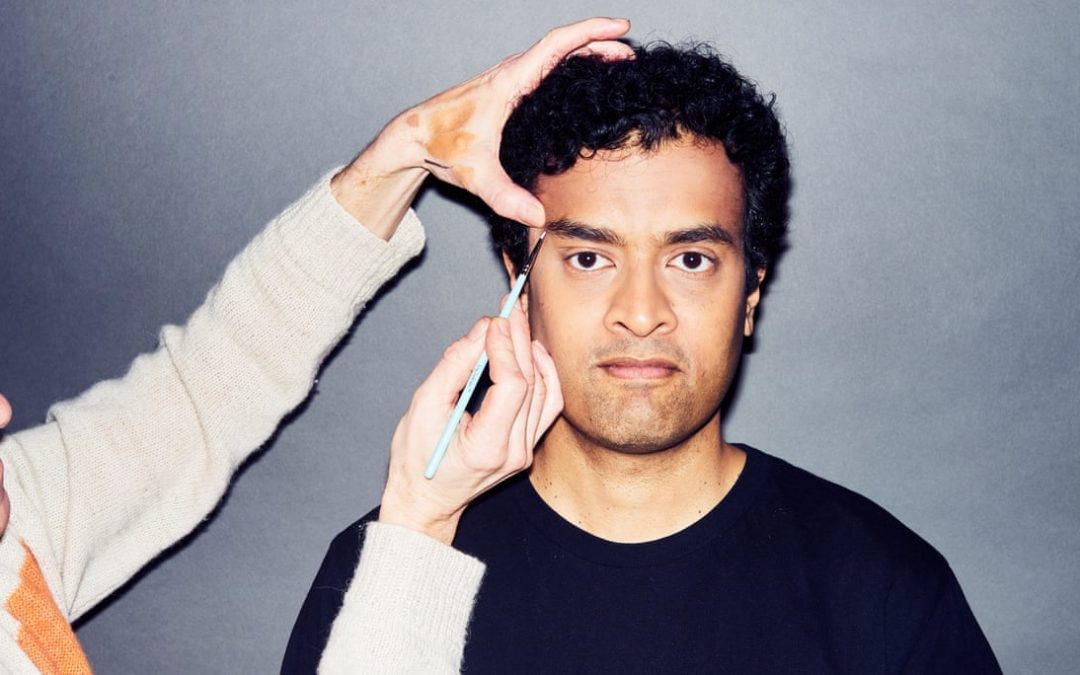 Beauty and the bloke: why more men are wearing makeup

Foundation, concealer, a little eyeliner… More and more men now put on makeup on a daily basis. Priya Elan (Guardian’s deputy fashion editor) meets the influencers behind the trend – and has a makeover himself.

The first time I tried on makeup I was six years old and my older sister decided to cover me in sickly raspberry-coloured glittery lipstick following the “more is better” mantra and the ethos, “it’s not on the lips, it’s around the lips.”

As I was presented to my parents, like a trussed up lamb to the slaughter beamed in from Laboratoire Garnier, Paris, the reaction was resoundingly reticent. Things turned into a Pinter play. My father was quietly horrified, refusing to talk for about six hours, and the incident was largely ignored by my mother who retired to the kitchen to gently throttle a metre of pastry. In the silent judgment that followed, I picked up on the vibe: boys don’t wear makeup. Clearly, I wasn’t born with it, whatever the Maybelline advert may say.

My next encounters with makeup were equally bizarre (mainly in various school plays wearing discoloured tones of bronzer, looking like child beauty pageant queen) and didn’t dislodge this idea. “The word ‘makeup’ has such feminine connotations,” Stéphane Marais, the makeup artist who has worked with Rihanna, Jennifer Lopez and Emma Watson, told Vogue Homme last year. “No man wants to admit he’s wearing makeup, as that would necessarily imply that he’s becoming more feminine.”

And yet today something (ie my big face) is looking very different. “You look really good!” a friend says, quickly eyeing my face to work out why. It’s New Year’s Eve and, nervously, I’ve taken the plunge. I’m wearing a subtle layer of male-specific makeup; concealer under my eyes and tinted moisturiser on my face. (“It’s hard to put on with facial hair,” my wife said as she dabbed the stuff on to me earlier in the day.)

‘Where do you buy your concealer?’: French president Macron and US president Trump at the Bastille Day celebrations in Paris, France. Both men are known to use makeup. Photograph: Ian Langsdon/EPA

Euromonitor predicts the men’s grooming and beauty market will be worth more than £49bn this year, a quadruple rise from what it generated in 2015. A decade ago the attitude towards it was a hornet’s nest of humour, incredulity and anger.

“Back then, men’s makeup was virtually unheard of and men were very much of the mindset that they had to be stereotypical ‘hurly burly blokes’,” says Alex Dalley, who launched male beauty company MMUK in 2011. “The average male grooming routine for men at that time was perhaps a shampoo and shower gel and maybe a moisturiser for the forward thinkers. At that time the concept of MMUK was almost offensive to people and judged as an attack on their masculinity.” As a Mumsnet thread on Superdrug’s men’s beauty line illustrates. “WTF is going on,” wrote user GrinningGorilla about the introduction of guy-liner and manscara in 2008. “I’m sorry but I like my men a bit caveman-ish. Makeup FFS? I don’t mind a bit of Nivea moisturiser on my man but makeup???!!!! Next he’ll be wanting to wear my underwear…”

In 2017 barely concealed sniggers greeted the reveal that French president Emmanuel Macron spent €26,000 (£22,000) on makeup in his first three months in office. And in December, the Washington Post hinted that Donald Trump used Bronx Color concealer, which was gleefully reported elsewhere.

In the early days of MMUK, Dalley says they would operate like an undercover operation. “Many customers would use different names when ordering and ask that their parcels be delivered in plain envelopes with no reference to makeup on them whatsoever,” he says. “Discretion was paramount for customers when we began building the brand and helping men find the right products was tricky for an online business.”

War Paint is the product I try on for New Year’s Eve. The packaging is in no-nonsense (and discreet) black and white, while their online ad is a bid for everyday “wash and go” style usage. In it a massively tattooed Harry Styles lookalike goes in for a baptismal shower. It’s shot like an ad for both the Army Reserve and Head & Shoulders. As he steps out, he puts on moisturiser and concealer alongside his skull ring and his leather jacket.

I’m obsessed by the name of the brand and its “real makeup for real blokes” angle. I click on the “about us” tab and read the story of founder Danny Gray. It’s a story of overcoming adversity (BDD – body dysmorphic disorder). At the end of his story is a link to Calm, the anti-suicide charity. “I’m in no way saying that makeup is a cure for bullies, or a miracle serum for low self-esteem,” he writes. “But using makeup has really helped me manage my BDD.”

In a vlog entitled “Is it OK for guys to wear makeup?” beauty blogger Jake Jamie contextualises the rise of male makeup with toxic masculinity and mental health issues, stemming from the “strong and silent” archetype. “Makeup,” by contrast he says, “enables me to walk down the street with my head held high feeling like the very best version of myself.” It feels like a statement of generational rebellion, as much as a body positive sales pitch.

The message is that men’s makeup is a route to happiness, confidence and self actualisation. Indeed, for the generations who followed baby boomer Trump and Macron’s generation X, the meaning of men’s makeup has evolved; the narrative around the jubilant men’s makeup business is now as much about redefinition as it is about anything else.

“That aggression has switched to intrigue and the embarrassment has evaporated,” says Dalley. When Chanel’s Boy De Chanel range launched in October 2018 it leaned heavily on the idea of actualisation through makeup, rather than the idea of visual enhancement. Boy stood for “Be only you” and consisted of foundation, lip balm and an eyebrow pencil. It was a product that was about, according to the press release, “breaking free of codes and rewriting the rules”.

The Chanel press office says: “Men should be free to use makeup products to correct or improve their appearance, without calling into question their masculinity. By wearing Boy De Chanel makeup, products with an undetectable presence, men can feel self-assured and determined, confident about themselves and their appearance.” In the language it uses, the modern men’s makeup industry seemingly takes its cue from the wellness and lingerie industries, focusing on core ideas of self-betterment and self-emancipation. Interestingly too, the word “makeup” does not appear on any of the products I try.

The meaning behind men’s makeup and grooming in general has splintered such that progressive millennial public figures have virtue signalled their woke credentials by publicly discussing their use of makeup and their skincare regimes. In 2018 Daniel Kaluuya was namechecked by Fenty Beauty for using its foundation; Frank Ocean spent most of his first interview in years telling GQ about his moisturising routine (“I really do believe in night cream”) and extolling the use of retinol (“You can’t have retinol in your creams in the day because it makes you more sun-sensitive, so you wanna throw that on at night.”) Pharrell Williams told the same publication that he exfoliates “like a narcissist madman” and just last month Saturday Night Live’s Pete Davidson told Paper about his “extra special” skin care regime.

Social media has helped turn men’s makeup and grooming from a “why” to a “why not”.

“On Instagram, men in makeup is fully normalised,” says Allison Collins, WWD’s beauty financial editor, who mentions Jake Jamie contemporaries Jeffree Star, Manny Mua and James Charles as three key players. “There are also male skincare influencers who have helped normalise it more on the grooming side – think OMGBart – who are super skin care-oriented. There are also micro influencers in the space, including Josh Blaylock (@mancrediblebeauty).” Collins adds that the noise this online community has made has drawn mainstream attention. “Both Manny Mua and James Charles have been named faces for major beauty brands [Maybelline and Cover Girl, respectively].”

MMUK’s Dalley says his customers are mainly millennials brought up on a diet of male beauty vloggers and selfies. “Our core customer base consists of men between the ages of 19-30, who are generally more active on social media and very much into the way they dress, look and like to feel.” Their most popular products are BB cream and concealer (“for its camouflaging properties”), both for the urban man-on-the-go, to solve issues such as dark circles, spots, acne scars and blemishes. But, interestingly, although men are happier to buy makeup, they don’t want to seem like they’re wearing it. Which I can relate to. “Across all of our customers, one thing remains the same,” says Dalley, “they want subtle and enhancing products that are undetectable.”

For all this talk about confidence, the clandestine element of men’s makeup is still significant. As is women’s validation around its use. When Victoria Beckham admitted that David nicked her products (“David 100% steals my beauty products,” she told This Morning. “We share beauty products”) she hit upon the importance of women’s attitude towards men’s grooming.

“Above everything, I think that it will be women who contribute the most to its normalisation,” says Dalley. “There are so many women out there who don’t mind their boyfriends or husbands wearing a touch of concealer or foundation, as long as it’s discreet. If women continue to really get on board with this, men over 30 in particular will be more encouraged to experiment with these types of products.”

After my brief experiment, I’m convinced that makeup isn’t the big bad enemy, in fact it does feel pretty normal to me, like adding a bit of moisturiser or hair gel to my look. But, despite getting my wife’s seal of approval, the biggest hurdle won’t be philosophical, it’ll be managerial: I can’t see myself adding an extra 10 minutes in the morning between burning toast and herding children. And if I do, I definitely won’t be telling my parents I’m wearing it.

Lads on the lash: not convinced? Seven starter steps for men, by James O’Riley

1. Weekly exfoliation is essential as it’s the easiest surefire way to naturally restore, resurface and illuminate the skin.

2. If the idea of wearing foundation or base to even out the skin tone is a step too far, opt for a tinted moisturiser or SPF as they are more natural in appearance and have beneficial skincare properties .

3. Over-shaping the eyebrows will feminise the face. Try brushing into place in the natural direction using a clear eyebrow gel to set in place.

4. Choose a lip balm with a matt or satin finish, as opposed to gloss, to nourish lips for a natural moisturised look.

5. Concealer should be no more than one shade lighter than true skin colour for a natural effect and, if trying to neutralise blue or purple under-eye circles, choose a shade with warm peach undertones.

6. To reduce unwanted shine opt for a mattifying gel instead of a powder for a look with no visible residue.

7. Gel bronzers will give you a believable translucent natural tan as opposed to powders that will look more like makeup.

This article contains affiliate links, which means we may earn a small commission if a reader clicks through and makes a purchase. All our journalism is independent and is in no way influenced by any advertiser or commercial initiative. By clicking on an affiliate link, you accept that third-party cookies will be set. More information.