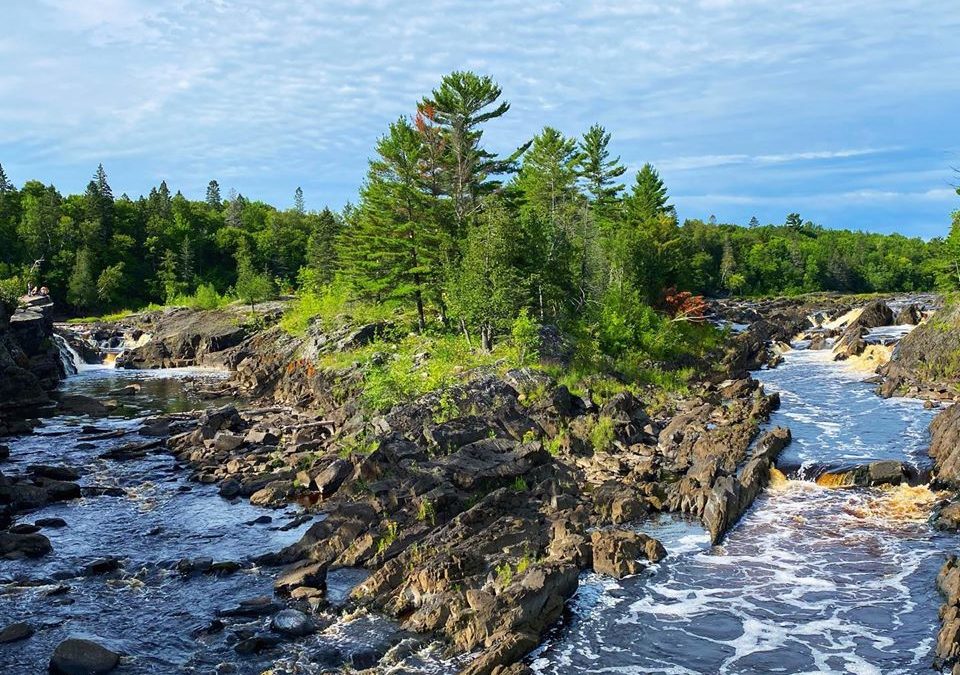 Trailblazers: this park is a must! Park trails link up to the Willard Munger State Trail at the north edge of the park; perfect for backpackers, bikers (both mountain and tour), hikers, horseback riders, and skiers.

Check out the wildflowers in the spring, and the vivid colors in the fall. Walk on the swinging suspension bridge high above the raging St. Louis River. Visit the historic cemetery and the gorge at Thomson Dam.

The promise of food and protection make Jay Cooke State Park an important wintering area for white-tailed deer. Black bear, timber wolf, and coyote are among the largest of 46 animal species in the park. The pileated woodpecker, marsh hawk and the great blue heron are just a few of 173 species of birds that nest and feed in the park. Sixteen species of reptiles and amphibians (none of which are poisonous) are found in the park.

When the 13 colonies were developing on the eastern seaboard, French fur trade was thriving in the Jay Cooke area because of the St. Louis River trade route. The Dakota Indians and the French traded for many years. As westward expansion increased, the Ojibwe drove the Dakota out to the plains. Shortly thereafter, disputes broke out between the French and the British over trapping rights. Eventually the fur trade slowed down and only a few small settlements remained.

Many years later, the railroads reached northern Minnesota. The “iron horse” brought substantial numbers of immigrant farmers northward. Although much land surrounding the park was cleared, the rough terrain was never suitable for farming.

Jay Cooke State Park was established in 1915 when the St. Louis River Power Company donated 2,350 acres of land. In 1945, the state purchased additional land. Other sections have been added over the years giving Jay Cooke State Park its present size of 8,125 acres.

The geological makeup of Jay Cooke State Park is one of slate, greywacke and red clay. The St. Louis River, Lake Superior’s largest U. S. tributary, has exposed the bedrock in many places. Slate beds were formed from original layers of mud and sand, which were deposited in a sea that occupied this area 1.9 billion years ago. These thick deposits compacted into shale (from mud) and greywacke (from sand).

Heat, pressure, and earth movements converted the deeply buried shale into slate. Underground pressure from the south caused the slate and greywacke beds to fold and fracture, giving the tilted character of these rocks seen all along the river bed upstream from Oldenburg Point. Later, about 1.1 billion years ago, molten rock was forced into fractures in the beds and when they cooled, these intrusions formed dikes which can be seen along the river bed today.

The red clay and silt that overlies the bedrock was deposited at the end of the Ice age (about 10,000 years ago) in a great, ice-dammed lake (Glacial Lake Duluth), the “ancestor” of modern Lake Superior.

The rugged land formations of Jay Cooke State Park enhance the beauty of the hardwood forests. The water-eroded gorge, steep valleys, and massive rock formations are seen throughout the park. In some seasons, the water of the St. Louis River thunders over slabs of ancient, exposed rock. At other times, it slows to a gentle trickle. Visitors enjoy the scenic splendor of Jay Cooke State Park during all seasons.