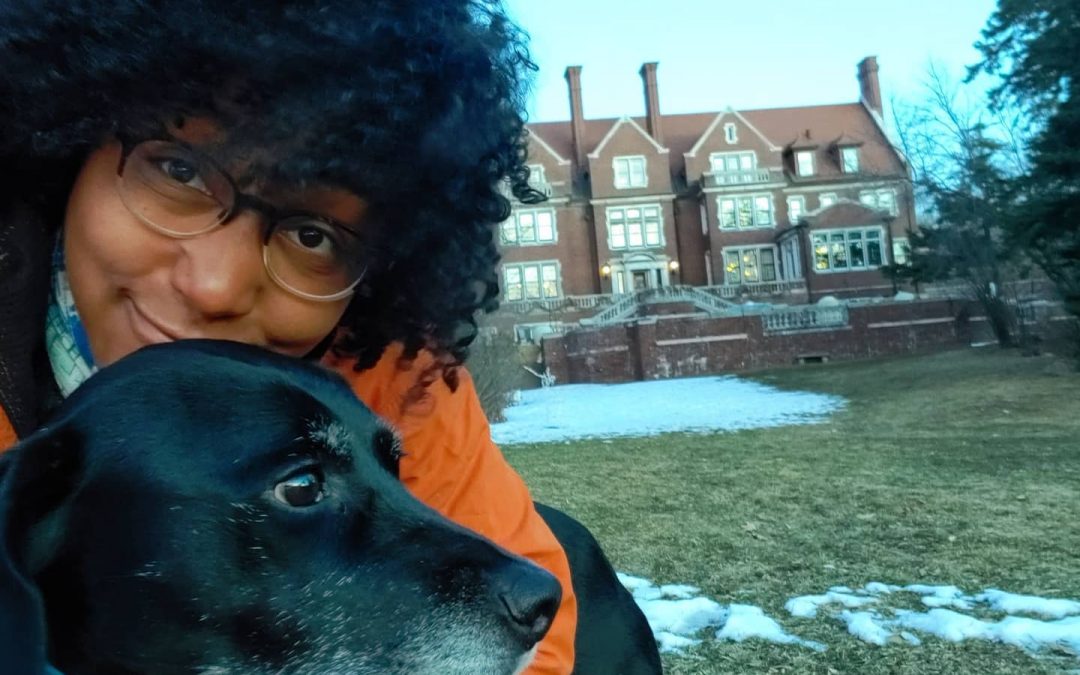 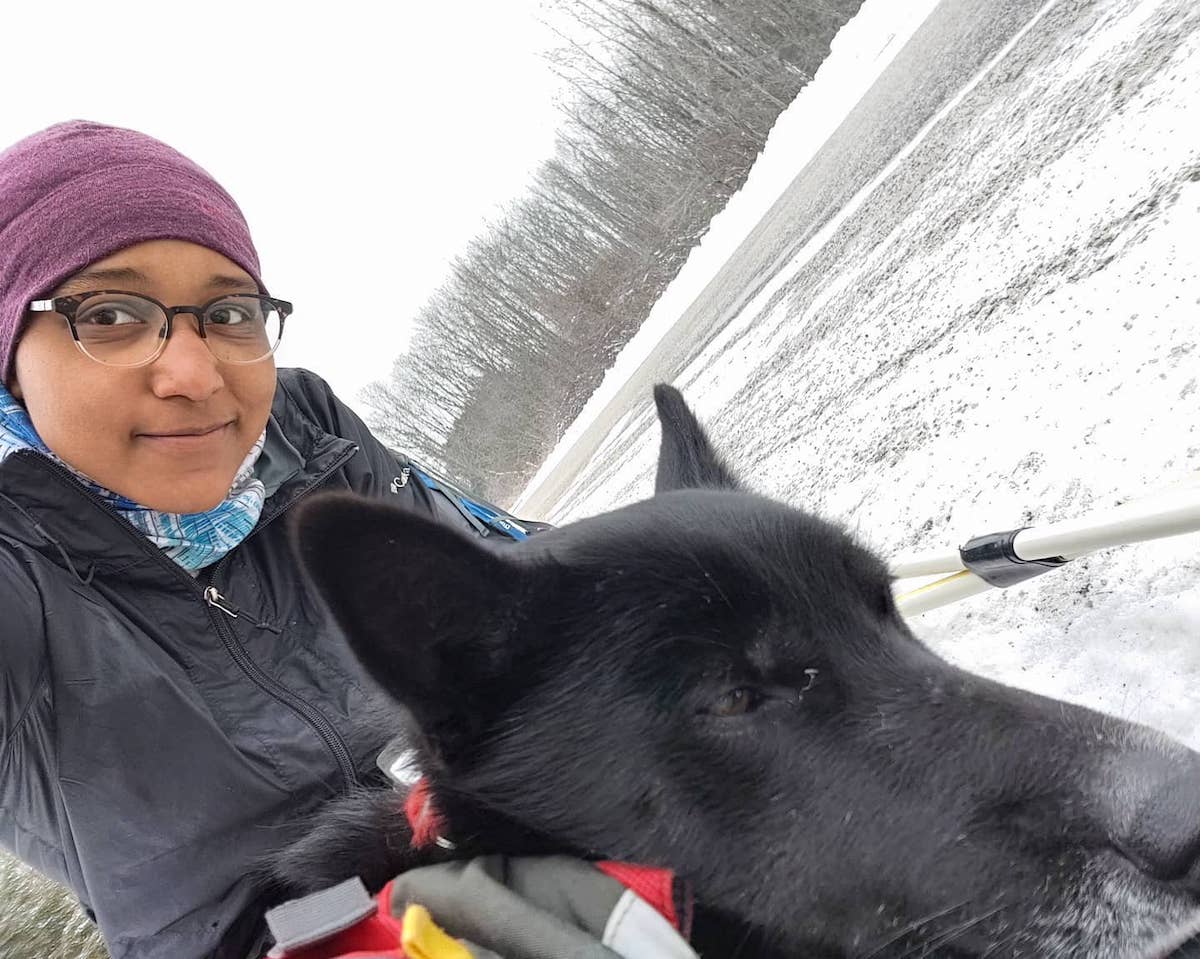 BringMeTheNews: A Duluth woman has become only the second person  — and the first woman — on record to finish a winter thru-hike of the Ice Age National Scenic Trail in Wisconsin.

Emily Ford, 28, and her borrowed canine companion Diggins spent 69 days hiking the roughly 1,200-mile trail from the Eastern Terminus in Sturgeon Bay in Michigan to the Western Terminus in St. Croix Falls, Wisconsin, completing the journey on Saturday, March 6.

Thank you for bringing us along on your Ice Age Trail adventure, @emilyontrail!

@iceagetrailorg @Western Terminus Ice Age Trail
…
Ford, carrying a 60-pound pack, and Diggins spent the majority of their time outdoors — sometimes in temperatures colder than 30 below zero — hiking and camping along the trail. The Duluth News Tribune said they averaged 16.5 miles walking per day (including a few rest days).

The Duluth-based gardener (she’s the gardener at Duluth’s Glensheen Mansion) is an avid hiker whose goal was to show others, especially Black women, that the outdoors is for everyone. And when she got to the Western Terminus, Ford told a crowd gathered to congratulate her that “anyone can play outdoors.”

“I hope that this kind of breaks down the stereotype for a lot of people,” she told The Guardian. “Whatever color they are.”

Ford told the publication that after George Floyd was killed, she decided to use her upcoming trek along the Ice Age Trail as a way to contribute to the equality movement, dedicating it to “all of us who don’t quite feel safe on the trails,” from people of color to those who feel like outsiders in outdoor sports.

While Black people represent about 12% of the U.S. population, they make up only about 9.4% of outdoor participants, according to the Outdoor Foundation’s 2020 report.

Ford amassed thousands of fans online during her journey and met dozens of people who sought her out on the trail to chat. Others referred to as “trail angels” left “trail magic” for her and Diggins, such as snacks, notes of encouragement and offers of places to warm up and sleep.

When she finished her trek, she posted on Instagram saying she’s happy to be home and thankful for everyone.

She did have to give Diggins back to her owner, saying “It was one of the toughest things I had to do the whole trip. But I know that she is destined to pull sleds, not be a house dog (maybe she will be after she retires).”

So thankful for this little trash monster ❤️

I hope your future is full of long trails, many race wins and long nights of sleep. I couldn’t have asked for a better partner in crime for the past 900 miles 🐾

…
In the days since returning to Duluth, she’s been sharing posts on social media about unpacking and all the gear she used for the months-long hike across the state of Wisconsin. She also shared that she grabbed some ice cream from Love Creamery and walked on the Superior Hiking Trail.

But Ford’s story isn’t over yet. She’s the subject of a film by Credo Nonfiction called Breaking Trail — filmmakers filmed her on much of her adventure.

Final update for the night! (Gotta nap before I hike ya know!)

Super stoked to have the remainder of this trip be captured by @credononfiction !

“She set a handful of significant firsts, was reunited with the people most important to her, and met countless strangers she had become important to — as they were drawn to her uncommon perseverance, which took on symbolic significance through the dark winter of COVID-19,” Credo Nonfiction said in a Facebook post. “The story of what happened out there, the people she touched, the challenges she overcame — will be the building blocks of our new film now in post-production … We cannot wait for everyone to experience this story.”

The Ice Age National Scenic Trail traces the edge of the glacier that covered Wisconsin during the Ice Age 15,000 years ago, when mammoths, sabertooth cats and cave lions roamed the earth, the National Park Service says.

The nearly 1,200-mile trail stretches from Potawatomi State Park in Sturgeon Bay, Door County, Wisconsin to the west, ending at Interstate State Park in St. Croix Falls, Polk County, Wisconsin, on the Minnesota border, according to the Ice Age Trail Alliance. The trail was established in 1980, and highlights what that giant glacier left behind (lakes, river valleys, rolling hills and ridges). It’s one of 11 national scenic trails and its entirety is in the state of Wisconsin.

While dozens of people have thru-hiked the Ice Age Trail (hiked the whole thing in one go), only one person — until Ford — is on record as having completed a thru-hike of the trail in the winter.

Mike Summers of Oregon was the first person to complete a winter thru-hike of the Ice Age Trail. He did it back in 2017, when it took him 58 hiking days and five zero days (rest days), the Journal Sentinel said.