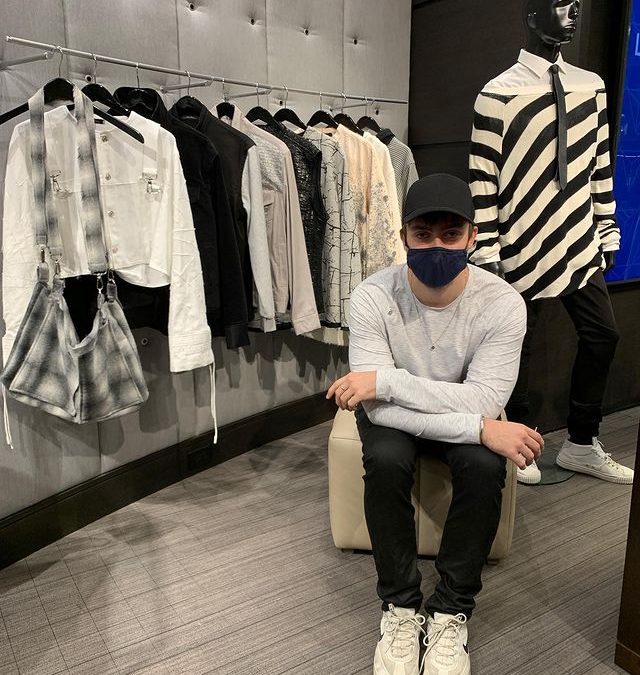 Photo courtesy of Beck Thompson
Beck Thompson is a Grand Forks Central High School graduate who now lives in Minneapolis.
…
Duluth News Tribune: At a fashion show in Minneapolis, Beck Thompson’s clothing caught the eye of an employee of MartinPatrick3, where he got a job as a sales associate and an opportunity to sell his line of men’s apparel.
…
When Beck Thompson graduated from Grand Forks Central High School in 2016, producing a line of men’s clothing wasn’t necessarily his career plan. But five years later, Thompson is delighted that his inaugural collection will debut at a Minneapolis boutique.

A dozen of Thompson’s custom-made pieces of upper-body clothing — including jackets, shirts and a vest — are featured at MartinPatrick3, a men’s clothing and interior design store in the North Loop of Minneapolis.

Thompson didn’t take any art classes in high school, instead using writing and his own fashion choices as ways to express his creativity. However, in 2017, a year after Thompson graduated, he started a small-scale clothing brand called Talklisten, which featured silk-screened T-shirts. He donated 20% of the profits to a mental health research program.

He produced the T-shirts at Ink Inc., a Grand Forks screen printing business owned by his father, Kelly Thompson, a visual artist.

“That’s where I figured out I like to design clothes,” Beck Thompson said. After tiring of having his designs limited to T-shirts, Thompson moved to Minneapolis in 2019 and started making other men’s upper-body clothing.

He didn’t have any sewing mentors in his family, so he learned the trade by watching YouTube videos. Meanwhile, he honed his design skills by taking classes at Minneapolis Community and Technical College.

“I learned how to make patterns, and I started entering fashion shows,” Thompson said. “At first I really had no idea what I was doing. The more I did it, the more I would understand how things came together.

”I learned how to make patterns, and I started entering fashion shows,” he said. “I make stuff that didn’t exist, but I wanted it to. I sew everything myself and I make all of the patterns myself.”

Thompson sews his clothes on the 30-year-old Bernina machine of his late grandmother, Pearl Altenburg. The sewing machine isn’t anything fancy, but it’s dependable.

At one of the fashion shows in Minneapolis, Thompson’s clothing caught the eye of an employee of MartinPatrick3, where he got a job as a sales associate and an opportunity to sell his line of men’s apparel.

“Ever since I’ve been on this journey of apparel design, they’ve been trying to get my clothes in there,” Thompson said. “There are 12 pieces … a few jackets, a hoodie, a vest, a couple of button shirts — mostly stuff you would throw on over a T-shirt.”

The boutique venue will be the first place Thompson has marketed his clothing line, and he hopes it will attract interest from customers.

“There are a lot of well-known people who come into that store all of the time. It’s going to be nice to have that exposure for the first time,” he said.

Thompson hopes to continue to advance his career in clothing design by moving to New York, where he has applied to the Fashion Institute of Technology. Eventually, he would like to design for a clothing company.