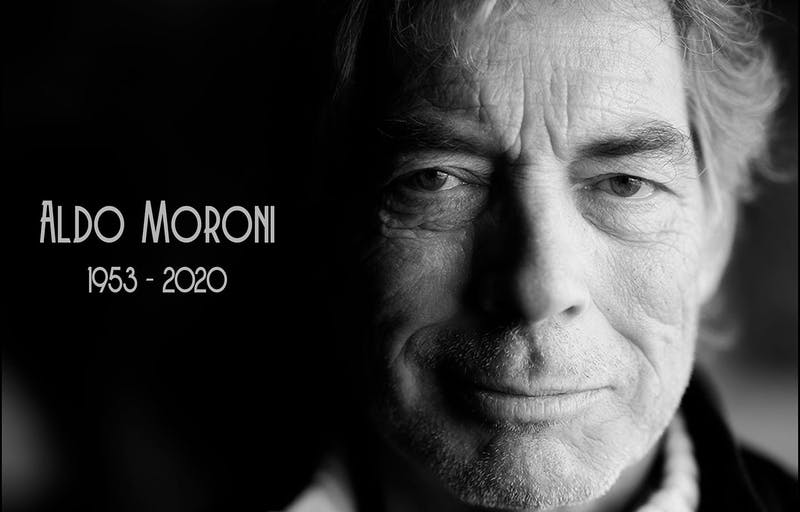 Moroni was an influential artist worldwide, but also in the Twin Cities, collaborating with and mentoring local talents, working out of the California Building for over 20 years. Minnesotans may be familiar with quite a few of his public art pieces. Life of Our State State of Our Lives can be seen at the State Capitol, and This River This Place, commissioned for the Federal Reserve Building, features a 3-D map of the upper Midwest.

Moroni is also known for his world-building projects, multi-year events where he would construct miniature villages and cities and invite revelers to drink wine and wreck them, only for him to return to rebuilding on top of the destruction. His most epic version was titled Babylon. In 2017, he celebrated 40 years in the art world with Trumptopia, a landscape of clay buildings exploring the impact that the Trump years would have on art.

“Artists have a responsibility to be political and make a statement,” Moroni told us before the opening reception. “That’s why I’m doing Trumptopia. You need to step up to the plate. You need to have a voice.”

His final project, M.EX. – Mesoamerican Experience, was to be a five-year work-in-progress where he would chronicle the history of Mesoamerica, touching on ancient societies like the Maya and Aztec, Spanish Imperialism, the Republic, and present-day Mexico. In the weeks following his announcement of his diagnosis, the piece became a community effort, as Moroni’s gallery hosted a handful of parties where folks were invited to help make buildings to add to the sculpture.

Shortly after graduating from MCAD, Moroni’s big break came in the late ‘70s. Martin Friedman, former director at the Walker Art Center, invited him to be part of a group show.

While Moroni was originally from Chicago, he spent most of his life in Minneapolis, creating art and raising two sons. He was a recipient of major fellowships from the big names around town: McKnight, Bush, and Jerome. His work has toured throughout the world.

“I always wondered, ‘What do they think about this crazy guy from Minnesota that makes little houses?’” Moroni pondered in a City Pages interview from 2017.

Moroni continued to create after his cancer diagnosis, raising funds for the Legacy Makers Place in the California Building. Once the pandemic slows down, the plan is to use the space for classes, workshops, and receptions for emerging and underfunded artists.

‘This River, This Place’ in Federal Reserve Bank of Minneapolis – Aldo Moroni

by Jessica Armbruster in Arts & Leisure